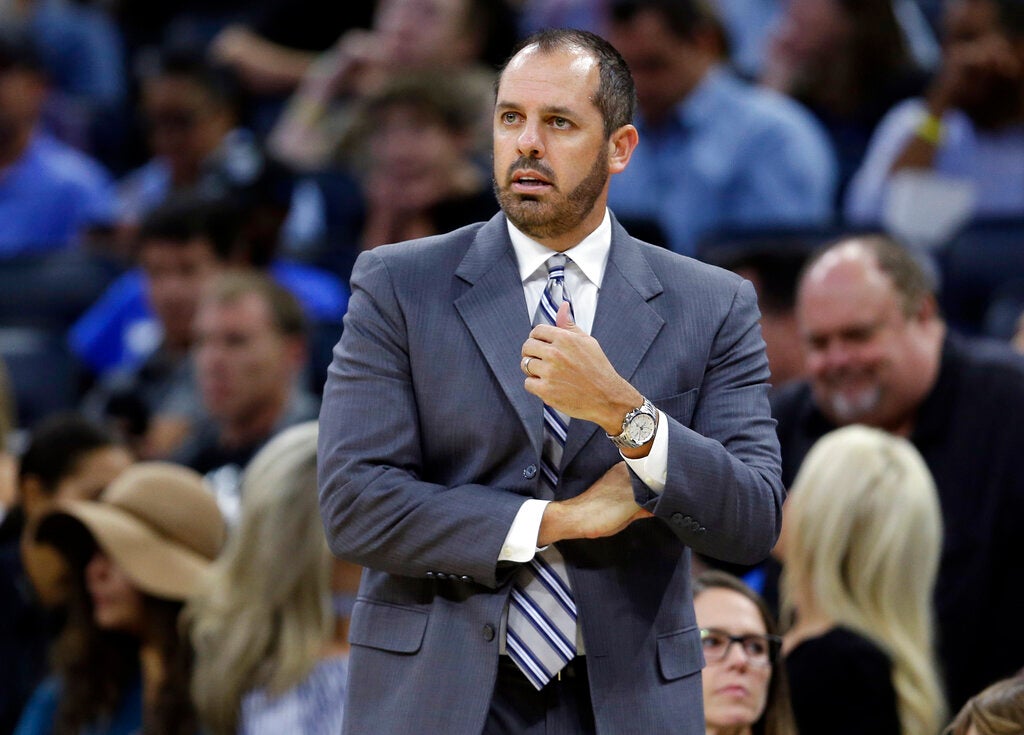 FILE – In this Oct. 24, 2017, file photo, Orlando Magic coach Frank Vogel watches his team play the Brooklyn Nets during the first half of an NBA basketball game in Orlando, Fla. A person familiar with the search says the Los Angeles Lakers have hired Vogel as coach. The person spoke to The Associated Press on condition of anonymity Saturday, May 11, because the hiring has not been announced. Vogel flew to Los Angeles on Thursday. The 45-year old Vogel did not coach last season following two years with the Magic. (AP Photo/John Raoux, File)

The team announced the hiring Monday and will hold an introductory press conference May 20 at its facility. The Lakers said in a release that Vogel has signed a multiyear contract but a person familiar with the hiring said it was a three-year contract. The person spoke to The Associated Press on condition of anonymity Saturday because they weren’t allowed to publicly discuss terms.

“I am very excited for this opportunity to join the Lakers, a prestigious organization that I have long admired,” Vogel said in a statement. “I look forward to coaching such phenomenal talent and bringing my strategic vision to the team.”

Vogel flew to Los Angeles on May 9 and met with a group that included owner Jeanie Buss, general manager Rob Pelinka and adviser Kurt Rambis after discussions with Tyronn Lue fell apart.

The 45-year old Vogel worked for the organization before as an advance scout during the 2005-06 season. He did not coach last season following two years with the Orlando Magic. Vogel went to Orlando following five-plus seasons leading the Indiana Pacers, including trips to the Eastern Conference finals in 2013 and ’14. He has a career record of 304-291.

“Coach Vogel has a proven track record of success in the NBA Playoffs,” Pelinka said in a statement. “He reflects the core qualities we were looking for in a head coach — including detailed game preparation, extreme hard work, and holding players accountable to the highest basketball standards.”

The Lakers have missed the playoffs six straight seasons. The drought was expected to end this season, but injuries to LeBron James, Lonzo Ball and Brandon Ingram, as well as internal discord, resulted in a 37-45 record. Vogel will be the Lakers’ sixth coach since Phil Jackson stepped down after the 2010-11 season.

The Lakers have yet to announce the hiring of Jason Kidd as an assistant on Vogel’s staff. Kidd — who interviewed with the Lakers last month — was a head coach in Brooklyn and Milwaukee but was fired by the Bucks during the 2017-18 season. He has a 183-190 record.

Los Angeles expects to have more than $40 million in salary cap space this summer and will likely resume its pursuit of New Orleans’ Anthony Davis either around the draft or the July 1 start of free agency. The Lakers will likely try to land Kawhi Leonard and other big names who might be willing to play with James.

They also have five players — Rajon Rondo, Kentavious Caldwell-Pope, Lance Stephenson, JaVale McGee and Tyson Chandler — who were on one-year or expiring contracts.