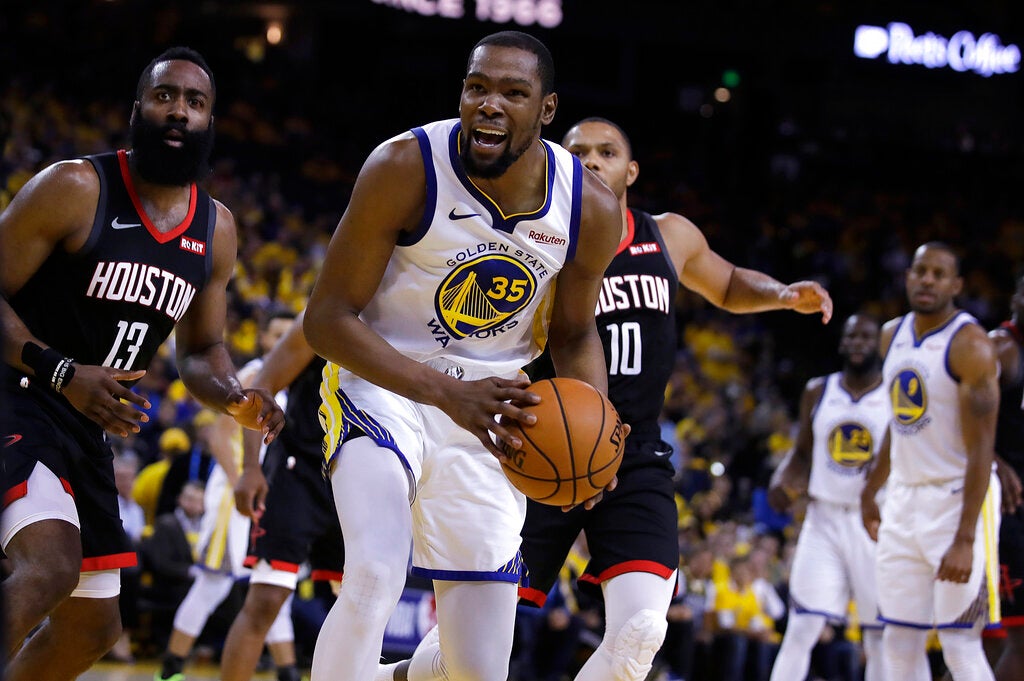 OAKLAND, California — Warriors star Kevin Durant will miss the upcoming Games 3 and 4 of the Western Conference finals in Portland as he continues to recover from a strained right calf, and the timing of his next examination by doctors likely means he would not return until the NBA Finals if Golden State advances.

Durant was re-evaluated Thursday before Golden State’s 114-111 Game 2 win in of the best-of-seven series with the Trail Blazers that put the Warriors up 2-0. Durant is not ready for on-court work — a necessary step before the two-time reigning NBA Finals MVP can return to game action. He will be re-examined in another week.

The Warriors said Durant “has shown good progress since beginning his rehabilitation program one week ago. At this point, Durant is not ready to advance to on-court work.”

“There’s no mental adjustment, you just play. You go out there with what you have,” coach Steve Kerr said. “This is our third game, 3 ½ games really, without him. We’re just trying to hold down the fort. Hopefully he continues to progress. And he has made progress but it’s a little more serious than we thought at the very beginning, so we’ll see how it all goes. He’s in there all day long getting treatment. Hopefully he’ll be back at some point.”

Durant’s 34.2 points per game lead all postseason scorers. He strained his right calf during the third quarter of Game 5 of the conference semifinals against the Rockets last Wednesday and didn’t travel to Houston for the Warriors’ Game 6 clincher. He then sat out Game 1 against Portland on Tuesday and again Thursday as Stephen Curry took on a greater scoring load.

“He’s handled it great. He’s vocal. Still being a leader. Staying in all of our ears. Vocal during film,” said Quinn Cook, a reserve Warriors guard and close friend of Durant. “I know he’s been putting in extra work. I know he’s excited to get back. We can’t wait to have him back.”

Andrew Bogut has started in Durant’s place the past three games.

“With him on the court, there’s just another great offensive player, and so when you put him out there with Steph and Klay (Thompson), it’s really challenging from a defensive standpoint. And his versatility in his offense,” Blazers coach Terry Stotts said. “When you take him out of it, I think they do play a different style. Certainly Curry gets more involved, I think Klay gets more involved, because they need to. And so the focus or emphasis on those two guys probably becomes a little bit more.”

In addition, Golden State center DeMarcus Cousins will be re-evaluated again in a week as he works back from a strained left quadriceps muscle sustained in Game 2 of the first round against the Clippers on April 15 — just his second career playoff game.

Cousins has begun doing extensive on-court work such as running, shooting and agility moves, “but is still not ready for live action,” the Warriors said.

ADVERTISEMENT
Read Next
Naomi Osaka into Rome quarters, wraps up French Open top seeding
EDITORS' PICK
EuroMillions Superdraw: A lottery draw unlike any other is coming to the Philippines
Water remains our saving grace right now
‘Justice will be done,’ Duterte assures as he vowed probe on Jolo incident to bare ‘truth’
Current dominant strain of COVID-19 more infectious than original—study
Smart releases Hyun Bin’s second TVC
DOLE: Return of OFWs’ remains from Saudi to be ‘delayed,’ deadline moved to ‘early next week’
MOST READ
BREAKING: Duterte signs anti-terror bill into law
Locsin warns of ‘severest response’ if China’s army drills in SCS ‘spill over’ to PH domain
Duterte tells military: No other president looked at you the way I did
Vico: Cleanup of bidding process saved Pasig gov’t P415M
Don't miss out on the latest news and information.