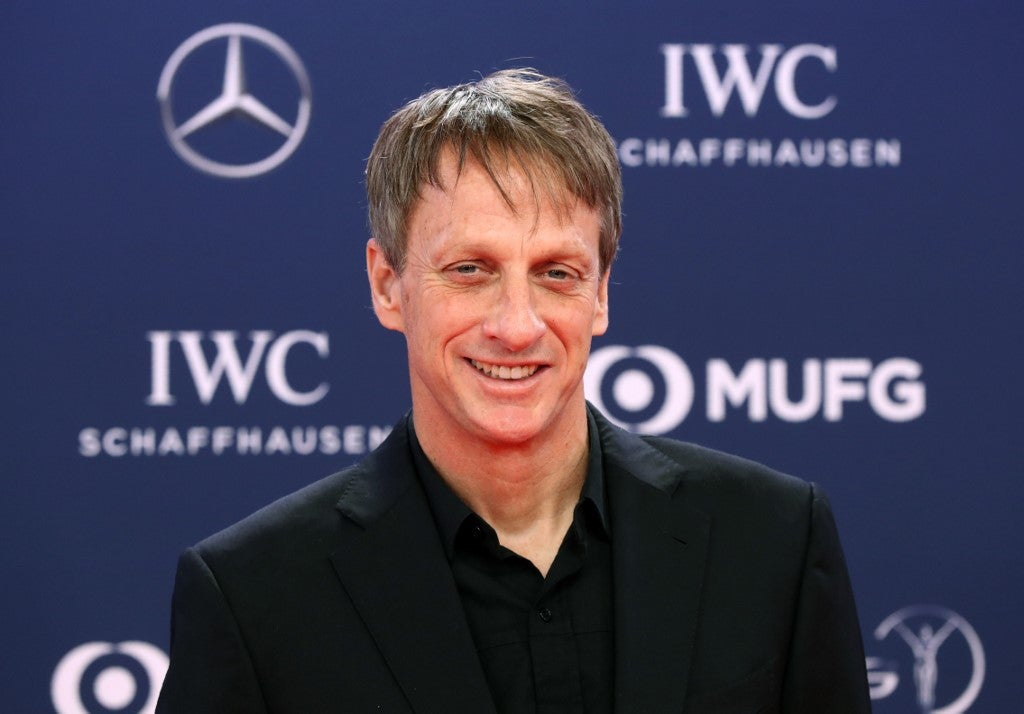 US skateboarder Tony Hawk poses on the red carpet before the 2019 Laureus World Sports Awards ceremony at the Sporting Monte-Carlo complex in Monaco on February 18, 2019. (Photo by Valery HACHE / AFP)

SAN DIEGO — One of the first things Tony Hawk was looking forward to doing when he arrived in Shanghai for his debut as commentator for the Vans Park Series was to grab a skateboard and do some prep work.

“Skating the courses and connecting with the competitors directly in order to have better insight when the competition actually starts,” Hawk said in an email exchange.

He’ll be at the microphone when Vans Park Series starts its fourth year of competition this weekend, showcasing the world’s best park terrain skateboarders a year before the sport makes its Olympic debut. Hawk will join co-host Chris Cote for the five competitions, which continue in São Paulo, Brazil June 22-23; Montreal July 12-13; Paris Aug. 9-10 and the men’s and women’s championships in Salt Lake City Sept. 6-7.

“It’s fun for me as a fan of skating to share my expertise with a larger audience, and give the casual viewer a better understanding in the nuances of skating,” he said.

Hawk said Vans events are “authentic and raw. We have seen some of the most progressive and evolutionary tricks and techniques occur during all the excitement, especially in the finals. And having pay equality for prize money is hugely important in validating women skaters that have been slighted for far too long in other events.”

Park terrain, he added, is “a hybrid of pool, vert and mini-ramp skating, with occasional ‘street’ elements added to the course. Focusing on only one of those disciplines will not benefit a competitor, so it is more likely that someone who grew up riding various skateparks will excel.”

With an international roster of skateboarding’s top pros, Vans Park Series awards a total series purse of more than $700,000 and has prize parity for men and women.

“Zion Wright has become an incredible skater in all terrain recently so he will be one to watch,” Hawk said. “I am also excited to see the spontaneous, unpredictable crew like Jake Wooten, Greyson Fletcher, Chris Russell and Clay Kreiner. For women, Lizzie Armanto is an obvious favorite, along with Jordyn Barratt, Poppy Olsen, Nora Vasconcellos and Sakura Yosozumi.”

The contest will be carried via livestream on www.vansparkseries.com.

Hawk, 51, said it’s too early to know if he’ll be broadcasting at the Olympics.

“I would entertain the idea of they ask me, but there have been no discussions as of yet. I think skateboarding will add a much-needed youthful energy to the summer games, and will most likely be one of the highlights from Tokyo 2020,” he said.