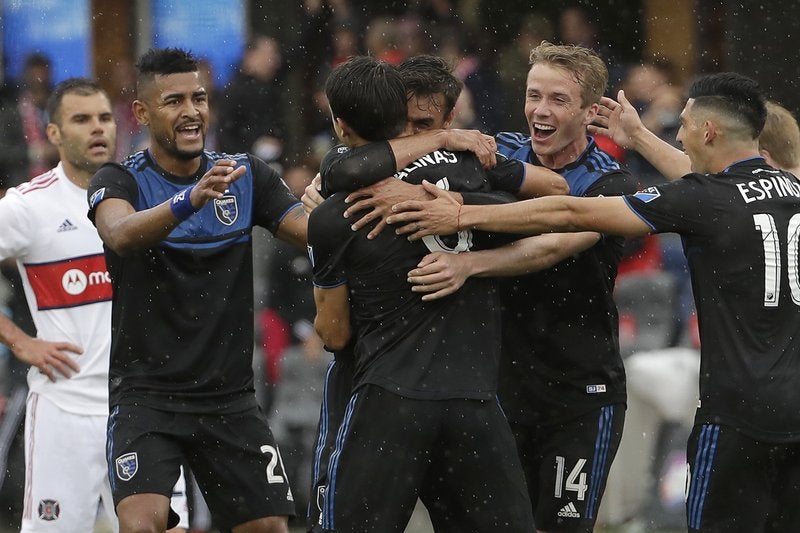 San Jose Earthquakes forward Chris Wondolowski, center back, is congratulated by teammates after scoring a goal against the Chicago Fire during the first half of an MLS soccer match in San Jose, Calif., Saturday, May 18, 2019. (AP Photo/Jeff Chiu)

Wondolowski tied Donovan’s record at 145 with his first goal in the 21st minute. Shea Salinas sent in a curling pass that Wondolowski punched home from just inside the 6-yard box.

He has shined with little fanfare — just the way “Wondo” prefers it as he focuses on the preparation he still so enjoys and being an example for young teammates — playing at home in the Bay Area, having grown up in the East Bay suburb of Danville. He went to college at tiny Division II Chico State, not part of an elite youth national team program. He didn’t even make his debut with the U.S. national team until six days before his 28th birthday in January 2011.

The 36-year-old two-time Golden Boot winner (2010, 2012) broke the record in the 48th minute with a left-footed punch from close range to the upper corner after poaching a loose ball from goalkeeper David Ousted as he tried to control a shot by knocking it down.

“I love visualization, I love going through different things. I always pictured hitting a 30-yard blast going upper 90, didn’t really picture the goalkeeper dropping it and tapping it in, but I’ll take it,” Wondolowski said. “Honestly, I’m just having fun right now. It’s kind of rejuvenated, reignited this passion and I’m really having fun right now.”

“It was an honor to play with and against you @ChrisWondo Congrats on an incredibly well deserved achievement,” Donovan posted on Twitter.

Wondolowski added goals in the 74th and 76th minutes, finishing assists from Cristian Espinoza and Jackson Yueill to make it 4-0 for the Quakes (4-6-2). Wondolowski hadn’t scored a goal so far this season coming into the match but ended the day with 148 career goals.

Wondolowski’s teammates tossed him in the air. He high-fived fans on a rainy Bay Area day as soaked supporters chanted “Won-do! Won-do!”

Passing someone like Donovan, widely considered the best player in MLS history, means so much. Dating to last season, the Quakes tracked each Wondolowski goal in the lead-up to the record-breaker on social media with “Wondo Watch.”

He had to wait until this season, perhaps a good thing after a lost year in 2018 for San Jose. Former Argentina midfielder and Guadalajara Chivas coach Matias Almeyda is now in charge.

“It’s looming just ’cause it’s there, but to be honest this year has been so much fun,” Wondolowski said. “I think that this coaching staff and this locker room have reignited that passion and a love for the game and I’m just enjoying it out there. I’m going out there not to score goals, I’m going out there because it’s fun.”

Other Bay Area professional teams were among those to offer congratulations, including the San Jose Sharks, Oakland Athletics and two-time defending NBA champion Golden State Warriors.

Wondolowski will long be remembered for a miss at the 2014 World Cup in Brazil. He failed to score from close range in the final minute of second-half stoppage time as the Americans were eliminated with a 2-1 extra-time loss to Belgium in the round of 16. He sailed that one-touch try wide and over the crossbar as the goalkeeper charged out.

Aleksandar Katai scored with a long-distance shot in the 83rd minute for the Fire (4-5-4).

Read Next
Horsing around: Riderless colt races to Preakness finish
EDITORS' PICK
The Best Tech Gifts For The 2022 Holidays
EDITORIAL: To a bike-friendly future
vivo’s coming to town to grant wishes with more holiday promos
Pagasa: Warm, sunny Sunday in most parts of PH
Is it safe to talk politics again at family gatherings? ‘The Reconciliation Dinner’ shows us what that’s like
House energy committee chair Arroyo bats for cheap electricity
MOST READ
LOOK: Vhong Navarro transferred to BJMP detention facility in Taguig
The Elephant Man in the Senate
Posh village as ‘shabu’ haven
LOOK: Zanjoe Marudo bonds with Ria Atayde, her family
Don't miss out on the latest news and information.