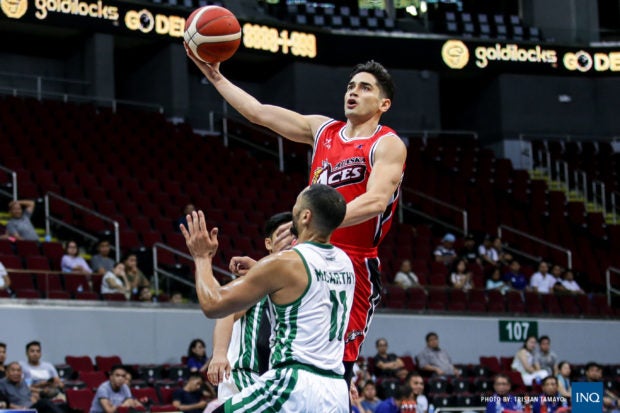 Coach Alex Compton relished Alaska notching its first win of the PBA Commissioner’s Cup over Columbian last Sunday—a breather in what will be a tough 10-day stretch for the Aces.

But not without a tinge of regret.

“I think I made a big mistake though today. I’m not sure; I think I played Chris Banchero too long,” Compton said. “I’m not sure what’s going on with his calf. I’m hoping that it’s just cramps. I’m hoping.”

Banchero had 20 points that night, his prints all over the Aces’ 111-98 decision over the Dyip. But the Alaska coach felt his top guard’s performance may come back to haunt him in the coming games.

Banchero hasn’t been the sturdiest guy on Alaska’s roster and the Aces are bracing for a whirlwind stretch that continues Wednesday when they battle dangerous NorthPort at 4:30 p.m. at Ynares Center in Antipolo.

“We have a nice little run here of four games in 10 days, so to get one is good. But we play again [on Wednesday], we play next Saturday, we play [again] next Wednesday,” he said. “With NorthPort coming up, it’s one of the reasons I’m kicking myself for playing Chris for such a long stretch … I hope I’m wrong, I hope it’s nothing big.”

The Batang Pier will be led by Prince Ibeh, whose last stop was with the Yokohama B-Corsairs in Japan’s B. League.