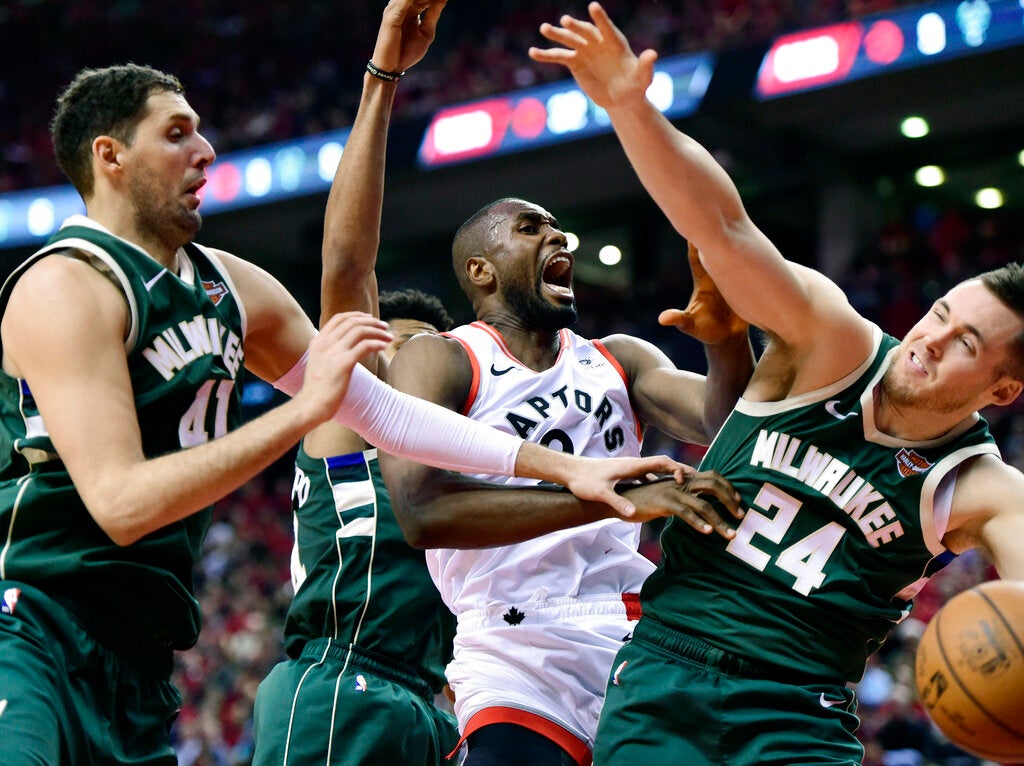 MILWAUKEE — The Bucks are back in Milwaukee looking to regain momentum in the Eastern Conference finals.

Coach Mike Budenholzer believes the play of his bench will be a major factor in what happens in Game 5 on Thursday.

But it was the Raptors’ bench, led by forward Norman Powell’s 18 points, that decided Game 4 — scoring 48 points Tuesday as Toronto evened the series at 2-2.

“They need to play well,” Budenholzer said Wednesday of his reserves. “I think our whole team, whether it be the bench or the starters, needs to be better defensively. I think there’s things offensively where the bench can, you know, just like the rest of us, we have to execute a little bit better. … this series, the benches have been critical and very influential and credit to Toronto’s bench, particularly. They really stepped up and had a huge game, and we need that from our group.”

Serge Ibaka gave the Raptors a lift off the bench Tuesday with 17 points and 13 rebounds. Fellow Toronto reserve Fred VanVleet added 13 points and six assists. Their efforts came as the Raptors got only 19 points from a hobbled Kawhi Leonard.

Raptors coach Nick Nurse is confident his bench will continue to play well in Milwaukee because of Toronto’s style of play.

“That’s really kind of our system, would be that we create opportunities and everyone’s involved and everybody’s touching the ball,” he said. “Everybody’s moving and cutting. It’s kind of a free-flowing, open system.

“If we play with the effort we’ve put in the last two games, actually three of the four games in the series, we are going to have a really good chance to win,” Nurse said. “We are going to put ourselves in position to win, and I don’t think it’s any tricky schemes or fabulous game plans. I think it’s our players playing their butts off, really.”

Brogdon, who returned from a foot injury in the Eastern Conference semifinals, missed his first seven shots Tuesday night and finished with just four points. None of the Milwaukee reserves scored in double digits.

“It was disappointing, but I mean, the series is 2-2,” said Bucks forward Kris Middleton, who finished with a game-high 30 points. “It’s not the end of the world. They protect their home court just like we did, and I know the fight is going to be a dogfight. First team to two wins. Can’t feel sorry for ourselves that we lost two in a row here. We have to go protect home court and go from there.”

Here are some other things to know going into Thursday’s Game 5:

Some of the league’s best defensive players are in the Eastern Conference finals.

NO TIMETABLE FOR ANUNOBY

Raptors coach Nick Nurse said OG Anunoby does not have a timetable for returning from an emergency appendectomy that has sidelined the 21-year-old forward for the entire postseason.

“He is being more active every day,” Nurse said. “I think we are getting closer to a point where we’re — you know, unpack is the next step for him. He’s moving pretty good, he’s shooting, etc., but still a ways away from being able to take hits and contact in the areas that he needs to test out.”

Before the two losses to Toronto in the Eastern Conference finals, the only other time Milwaukee dropped back-to-back games was in March, losing at Utah on March 2 and at Phoenix on March 4.

Drake’s impromptu massage of Nurse’s shoulders is getting a lot of attention, though the Raptors’ coach said he didn’t even realize it had happened.

“I didn’t even know I got the shoulder rub last night until somebody showed me a picture today,” Nurse said. “I didn’t even feel it. I was so locked into the game. Didn’t distract me at all.”

Drake has been very animated at courtside, and Budenholzer said if the rapper steps onto the court, it crosses the line.

“I don’t know how much he’s on the court. It sounds like you guys are saying it’s more than I realize,” Budenholzer said. “There’s certainly no place for fans and, you know, whatever it is exactly that Drake is for the Toronto Raptors. You know, to be on the court, there’s boundaries and lines for a reason, and like I said, the league is usually pretty good at being on top of stuff like that.”