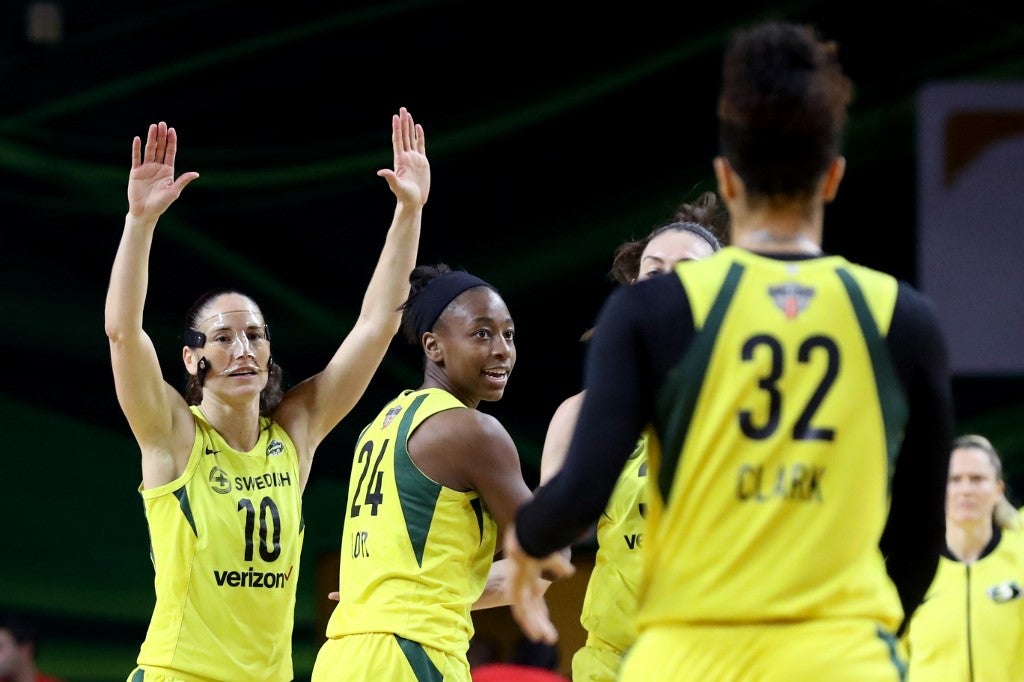 FILE – Sue Bird #10 and Jewell Loyd #24 of the Seattle Storm celebrate a three pointer against the Washington Mystics in the first half during game three of the WNBA Finals at EagleBank Arena on September 12, 2018 in Fairfax, Virginia. Rob Carr/Getty Images/AFP

NEW YORK  — It’s been a busy offseason for the WNBA with big names changing places, a new commissioner and sadly a few injuries to some of the games’ greatest players.

The league will tip off its 23rd season on Friday with many teams hoping to win the championship this year. The defending champion Seattle Storm may be extremely hard-pressed to repeat. Reigning MVP Breanna Stewart suffered an Achilles injury in the winter while playing for a Russian club team. She’ll be sidelined for the season.

The Storm took another hit this week when it was announced that veteran point guard Sue Bird was going to be sidelined indefinitely with a knee injury. Seattle is also missing coach Dan Hughes for an indeterminate amount of time as he battles cancer.

“The most important thing to us is that Sue is healthy and strong. Based on her feedback and evaluation from her longtime surgeon and our medical team, it was determined the best course of action was a scope,” Storm CEO and general manager Alisha Valavanis said. “We have confidence this will support Sue’s full recovery and we look forward to her return to the court.”

With the Storm short-handed, Washington, Las Vegas and Los Angeles are the favorites to win the title. The Mystics lost to the Storm in the WNBA Finals last season. The Aces added 6-foot-8 Australian star Liz Cambage last week. The runner-up for the MVP in 2018 will give Las Vegas a dynamic duo in the front court, pairing her with last season’s rookie of the year A’ja Wilson.

The Sparks added Chiney Ogwumike from the Connecticut Sun, pairing her with her sister Nneka. The sisters will have to carry the load a little more in the early part of the season as Candace Parker is sidelined with a hamstring injury for a few weeks.

Here are a few other tidbits for the upcoming season.

MISSING IN ACTION: Stewart, Bird and Parker aren’t the only players not playing for the early part of the season due to injury. Angel McCoughtry is still recovering from a knee injury she suffered last year. Diana Taurasi is out for at least a month while recovering from a back injury. It isn’t just injuries that are sidelining some of the league’s top players. Skylar Diggins-Smith gave birth to a baby boy this spring and hopes to return to the Dallas Wings lineup at some point this season. Maya Moore decided to take a year away from playing basketball to focus on her family and “some ministry dreams that have been stirring in my heart for many years.”

NEW LADY IN CHARGE: The WNBA has a new leader as the league hired Cathy Engelbert as its commissioner last week. The previous four leaders of the WNBA had been known as president.

“Commissioner, first of all, honored and humbled to have that title. And it comes with awesome responsibility … just really humbled,” Engelbert said.

Since 2015, Engelbert has been CEO of Deloitte US, an accounting organization that works with Fortune 500 companies. She was the first woman to hold that job. Engelbert won’t start till around the All-Star Break in late July.

MORE TV OPTIONS: The league struck a deal to broadcast 40 of its games on the CBS Sports Network . That nearly doubles the amount that were shown on national television last year. The TV channel will use local broadcast feeds for now, similar to what NBA TV does for WNBA games. The league also has a deal with ESPN to show 16 regular-season telecasts, including three on ABC. The upcoming NBA TV schedule of WNBA games has not been finalized yet, but nearly 50 games are expected to be broadcast — the same as last year.

NEW OWNERSHIP: The New York Liberty found a new owner in the offseason as the team was bought by an investment group led by Brooklyn Nets minority owner Joseph Tsai. Tsai, co-founder of the e-commerce giant Alibaba Group, bought a 49 percent interest in the Nets in April. The team played an exhibition game at Barclays Center and drew over 4,000 fans. The team will play most of its home games this season in Westchester, but Tsai said at the exhibition game that he would welcome more games at Barclays in the future.

Read Next
After phenomenal PBA debut, expect Terrence Jones to still get better for TNT
EDITORS' PICK
EuroMillions Superdraw: A lottery draw unlike any other is coming to the Philippines
Water remains our saving grace right now
‘Justice will be done,’ Duterte assures as he vowed probe on Jolo incident to bare ‘truth’
Current dominant strain of COVID-19 more infectious than original—study
Smart releases Hyun Bin’s second TVC
DOLE: Return of OFWs’ remains from Saudi to be ‘delayed,’ deadline moved to ‘early next week’
MOST READ
Duterte tells military: No other president looked at you the way I did
Locsin warns of ‘severest response’ if China’s army drills in SCS ‘spill over’ to PH domain
BREAKING: Duterte signs anti-terror bill into law
Vico: Cleanup of bidding process saved Pasig gov’t P415M
Don't miss out on the latest news and information.