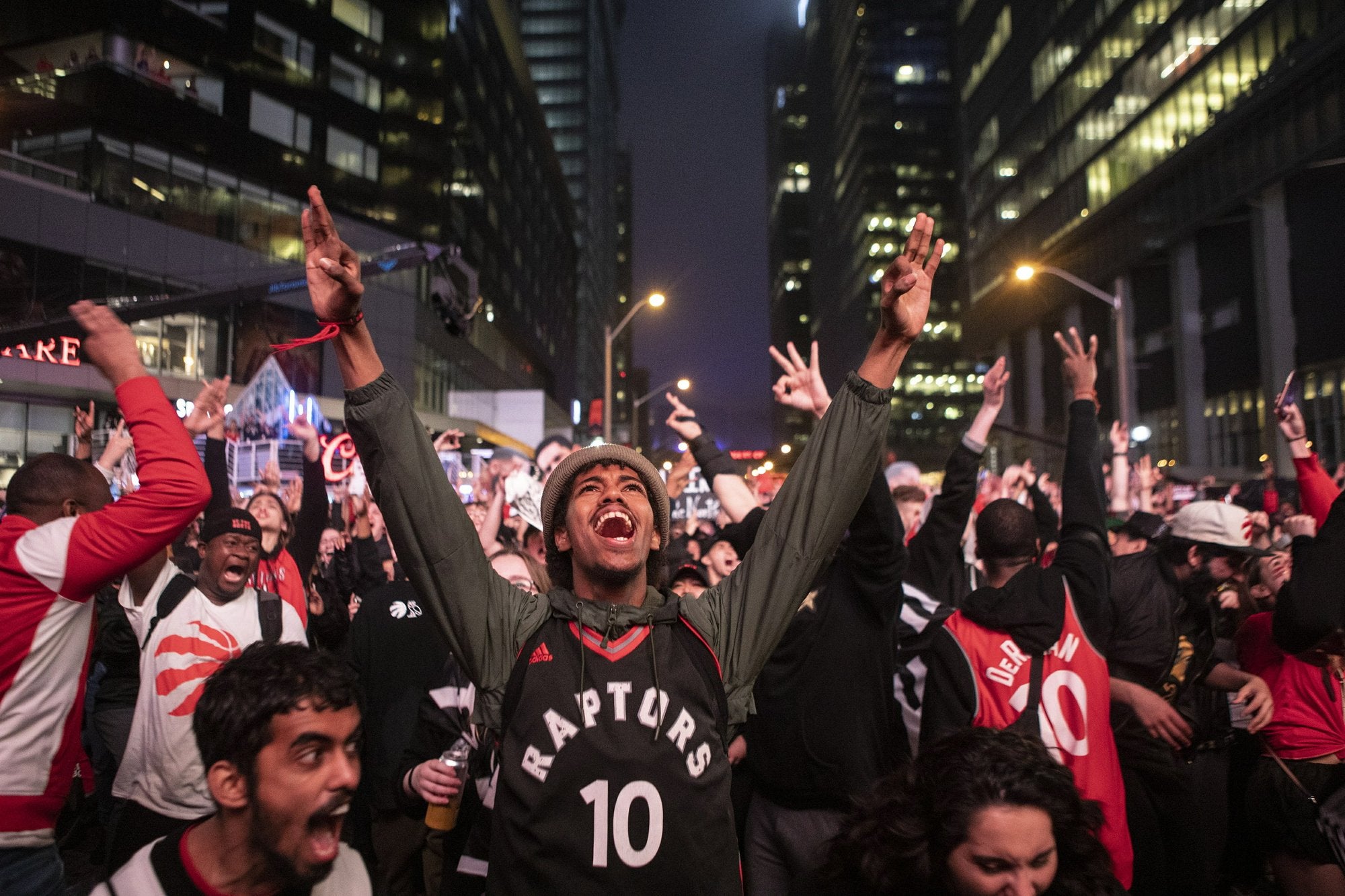 Toronto Raptors fans react as they watch Game 6 of the NBA basketball Eastern Conference finals between the Toronto Raptors and Milwaukee Bucks, on a screen outside Scotiabank Arena, in Toronto on Saturday, May 25, 2019. (Chris Young/The Canadian Press via AP)

The first NBA game was in Toronto.

And now, the NBA Finals are headed there.

The NBA Finals are set after the Toronto Raptors won the Eastern Conference championship on Saturday night and earned the right to play the Western Conference champion Golden State Warriors. For the Raptors, it’ll be the first time on this stage; for the Warriors, it’ll be an 11th trip to the finals and fifth in a row, as they look for a fourth crown in the last five seasons.

Game 1 is Thursday night in Toronto, which will become the first city outside the U.S. to play host to a finals game — a milestone that comes just about 73 years after Toronto was the site of the first game in NBA history.

The Raptors weren’t around then: Toronto’s first NBA team was called the Huskies, a club that went 22-38 in its only season. The Raptors have been around since 1995, and in their 24th season they’re finally going to play for a ring.

“They’re the champions,” Raptors star Kawhi Leonard said of the Warriors. “We’ve got to go in, have the mental focus, enjoy the moment and take the challenge.”

While it is the first finals trip for the Raptors franchise, many Raptors players have been there. Leonard and Danny Green got there with San Antonio in both 2013 and 2014, with Leonard winning MVP of the series against Miami five years ago. Serge Ibaka was with Oklahoma City for its appearance in 2012 and Raptors reserve Patrick McCaw was part of the Warriors for their title runs in each of the past two seasons.

For the Warriors, this has almost become an annual rite.

Stephen Curry, Klay Thompson, Draymond Green, Andre Iguodala and Shaun Livingston have been part of each of these five runs to the finals by Golden State. Kevin Durant is going to his third in a row and fourth overall; if he wins Finals MVP — that would seem unlikely at this point, since he isn’t expected to play in Game 1 and it’s unknown if he’ll actually appear in the series at all because of a calf injury — he would join Michael Jordan and Shaquille O’Neal as the only players to win that trophy in three consecutive seasons.

By the time Game 1 rolls around, the Warriors will have been off for 10 days. They scrimmaged Saturday to break up the monotony.

“I think we try and be smart with it,” Iguodala said. “We got a few guys just trying to get back from injury and it’s given us some time to get that rest and take advantage of it.”

Warriors coach Steve Kerr has a chance at his ninth championship. He won five as a player, has three already as a coach and is going to the finals for the 10th time in his last 13 seasons in either of those roles.

“It’s not like we’ve come to expect it, but we’re veterans of this experience and this run and our guys know how to finish games,” Kerr said. “They know how to win playoff series, and so there’s a sense of confidence going into every round. There’s still a sense of joy and accomplishment getting to the finals. It’s so hard to do.”

For Leonard, it’ll be the first trip to the finals since he was MVP of the series in 2014.

And it only continues to prove that his first year in Toronto was a complete and total success.

Traded to the Raptors last summer by San Antonio — DeMar DeRozan was the big piece the Spurs got — one of the major storylines entering this season was Leonard’s health and whether he’d fit in Toronto.

Asked and answered. Leonard has averaged 31.2 points and 8.8 rebounds in the playoffs, had a 27-point, 17-rebound, seven-assist effort in the win over Milwaukee that clinched the East on Saturday, and had perhaps the best moment of this postseason when his buzzer-beater hit the rim four times before dropping to beat Philadelphia in Game 7 of the second round.

“He’s been great,” Kerr said of Leonard. “Not surprising, though. He’s got his finals MVP a few years ago. One of the best players in the league, so he’s been great.”

Either Game 4 or Game 6 — on June 13, if it goes that far — will be the final time the Warriors call that building home. They’re leaving Oakland after this season for the brand-new Chase Center in San Francisco.

The Raptors swept the season series, though there are plenty of reasons not to make too big a deal out of that. For starters, the teams haven’t played since Dec. 12. And neither team was at full strength in either of those games — Durant scored 51 in a 131-128 loss at Toronto in a game where the Warriors didn’t have Curry, Cousins or Green; the Raptors won by 20 at Oracle even without Leonard two weeks later.

Regardless, it can now be said: Toronto and the Bay lay claim to the NBA’s two best teams this season.

All that’s left to decide now is who’ll be hosting the championship parade and hoisting the Larry O’Brien Trophy.