Trump watches sumo, but it's not just a sport in Japan | Inquirer Sports
Close
menu
search

Trump watches sumo, but it’s not just a sport in Japan 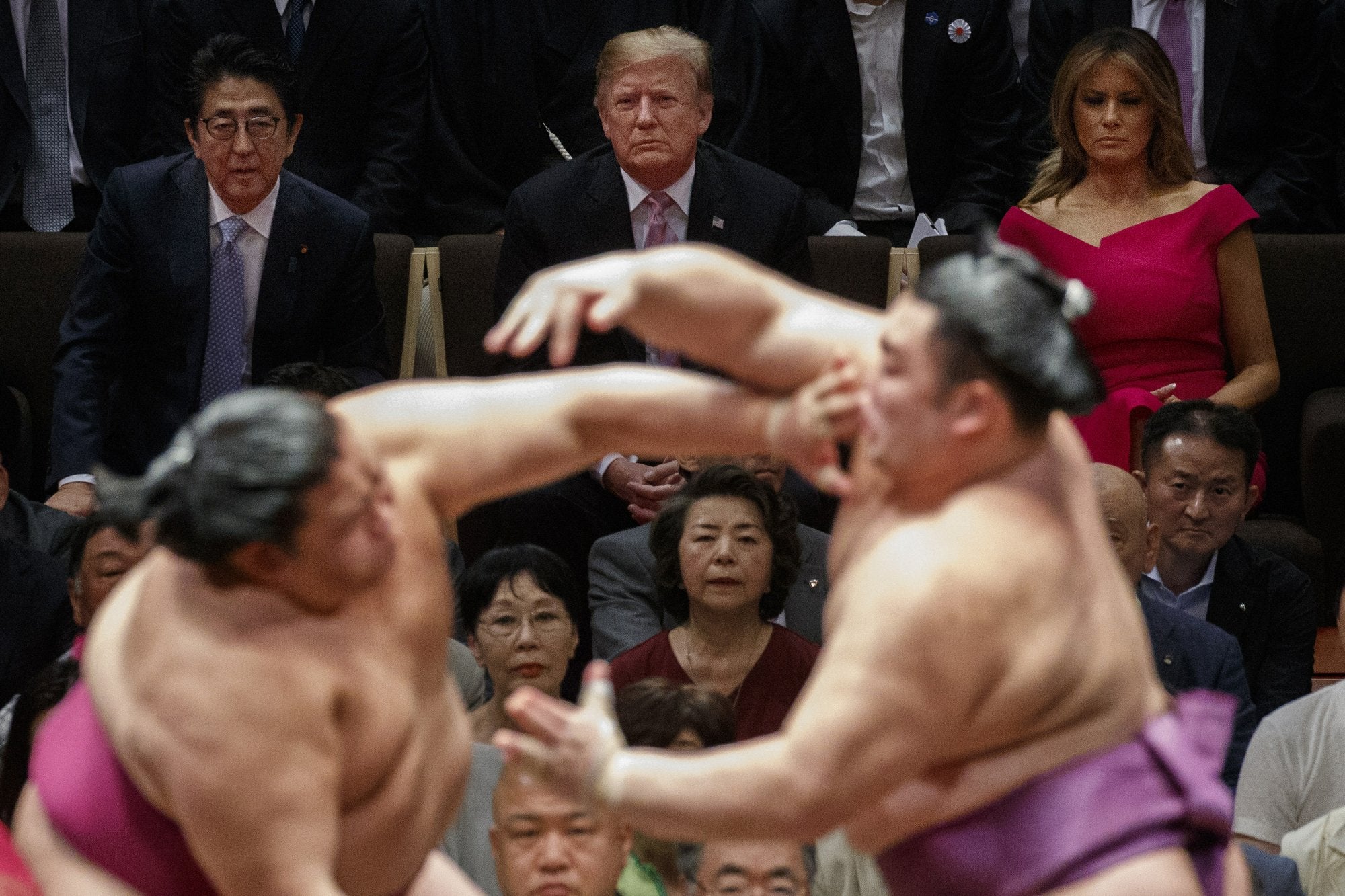 TOKYO — President Donald Trump watched sumo wrestling with Japanese Prime Minister Shinzo Abe on Sunday, becoming the first American leader to do so. Trump, who is on a four-day state visit to Japan, presented a special U.S.-made trophy to the winner.

Some key facts about sumo, which is deeply tied to Japan’s ancient religion of Shinto:

The origins of sumo can be traced back to the Shinto ritual for a good harvest at imperial courts in the 8th century. It later was used as martial arts training for samurais before becoming entertainment for the people during the Edo period, with the introduction of stylized rules including the art of entering the ring, the use of loin cloths, topknots and kimonos, as well as fighting regulations.

Based on Shinto belief, the elevated dirt ring, or “dohyo,” is considered sacred. Before every tournament, Shinto priests perform rituals to pacify the gods by pouring rice, sake and other offerings into a little hole in the center of the ring. Wrestlers also rinse their mouth with water before entering the ring, while only senior wrestlers are allowed to use salt to purify themselves and repel evil spirits. They use up to 700 kilograms (1,543 pounds) of salt during every 15-day tournament, according to the Japan Sumo Association.

Only men can become professional sumo wrestlers, because under sumo’s Shinto tradition, women are considered unclean, and are not allowed to enter the ring. Last year, a sumo referee blocked women who went up to the ring to provide first aid for a mayor who collapsed in the ring while making a speech at a sumo event in Kyoto, triggering criticism that sumo officials were prioritizing their gender-biased tradition over someone’s life.

Unlike other athletes, sumo wrestlers are considered living performers of cultural tradition and are expected to be role models. This is especially true of the yokozuna — those considered to have dignity and grace in addition to outstanding sumo skills. Wrestlers come from across Japan and are divided into 46 “stables,” each run by “oyakata,” or masters — retired wrestlers who had reached the sport’s highest ranks. By tradition, they live and train together at each stable, where young apprentices are assigned to cleaning, cooking and other chores for their seniors. The hierarchy-based apprenticeship has sometimes caused bullying and hazing.

A wrestler who pushes his opponent out of the ring, or makes him touch the ground first, is declared the winner. The number of wins during a 15-day tournament determines their ranks, which go as high as the most prestigious yokozuna, or grand champion. There are six tournaments per year. A tournament winner is awarded two main trophies — the Emperor’s Cup and the Prime Minister’s Cup — as well as dozens of international and prefectural prizes such as a huge macaroon cookie from the French Embassy, a year’s supply of strawberries donated by Fukuoka prefecture and a trophy filled with dried mushrooms from Oita prefecture.

Fans in the ringside “masu seki” box seats typically sit on zabuton mattresses on tatami mats. The seats include servings of yakitori and tea served in ceramic pots and cups, while the spectators can also purchase beer and other drinks. The masu seki tickets also come with other treats, including sweet bean desserts, towels and memorabilia. Fans customarily throw their cushions toward the ring to cheer a wrestler who beat a senior opponent in an upset match.