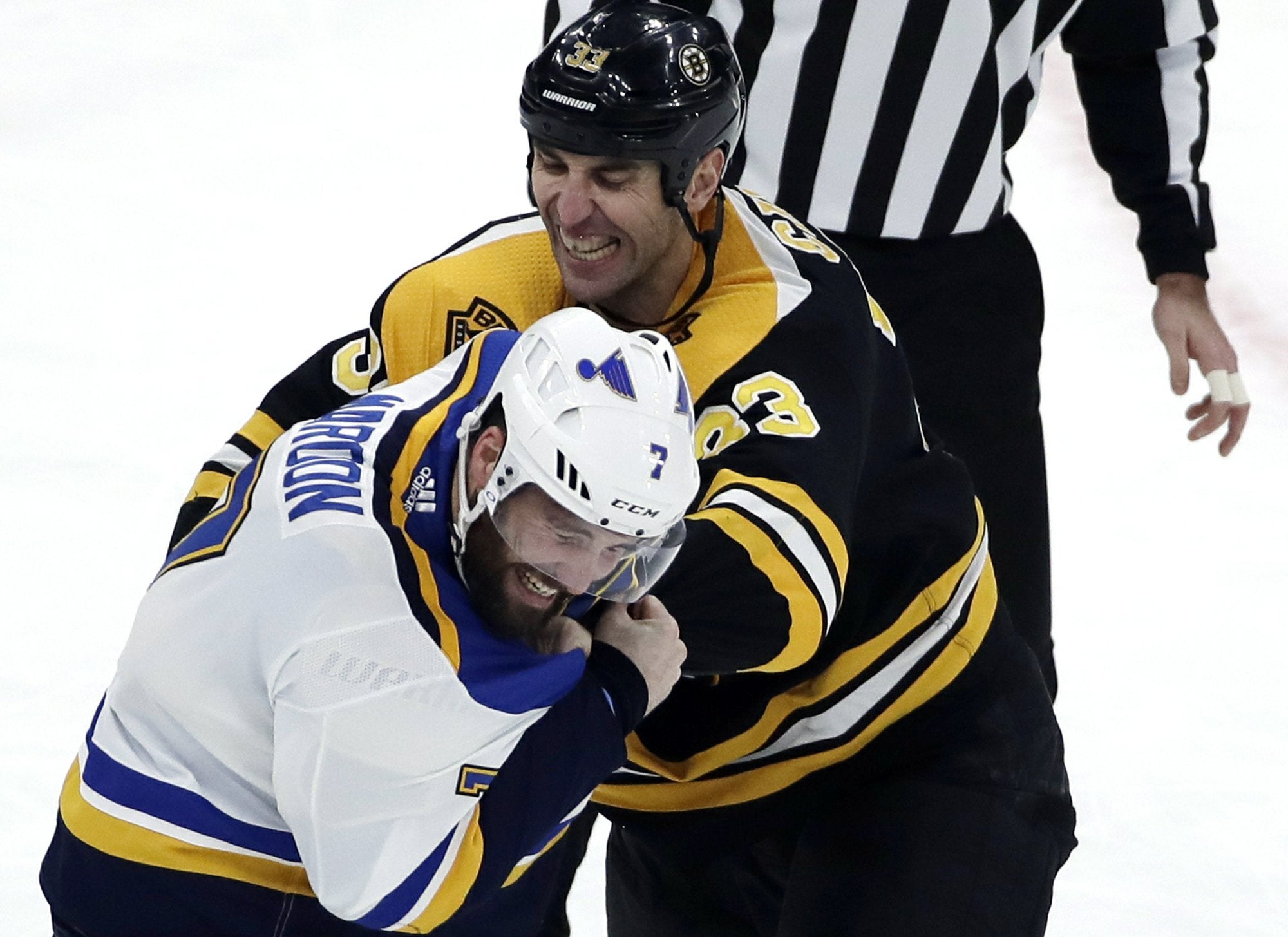 FILE – In this Jan. 17, 2019, file photo, Boston Bruins defenseman Zdeno Chara (33) and St. Louis Blues left wing Pat Maroon (7) fight during the first period of an NHL hockey game, in Boston. Game 1 of the Stanley Cup finals between the Bruins and Blues is Monday, May 27. (AP Photo/Elise Amendola, File)

BOSTON — When the NHL altered its rules with an eye toward speed and skill, this is not the Stanley Cup Final it had in mind.

Hockey is becoming less of a big man’s game, offense is up and it’s faster than ever. Then there’s the big and tough St. Louis Blues facing off against the bigger and tougher Boston Bruins in the final that shows size still matters in the playoffs.

“They are physical, we’ll be physical,” Bruins coach Bruce Cassidy said Sunday. “I don’t think we shy away from that type of game.”

The past decade-plus has been a study in the NHL getting younger and quicker, and previous champions like Chicago in 2013 and 2015 and Pittsburgh in 2016 and 2017 exemplified that. The 2019 champion will show there are still many kinds of blueprints for winning, though skill is still needed along with size and physicality.

When the puck drops on Game 1 Monday night, the bruises will begin in what should be a throwback series with the Stanley Cup on the line.

“At this point you’re going to get both teams coming out of the gates laying their hits,” big Blues defenseman Robert Bortuzzo said. “It’s going to be a heavy series. It’s hard to say how much physicality will be going both ways. I’m sure guys will be looking to get their licks in.”

Boston and St. Louis don’t lack high-end skill, from goaltenders Tuukka Rask and Jordan Binnington to scorers Brad Marchand and Vladimir Tarasenko. They do resemble their coaches — Cassidy, who has become a mature, straightforward communicator and Craig Berube, a no-nonsense, team-first guy who has turned the Blues into a north-south, no frills team.

These teams are in many ways mirror images of each other based on their gritty styles and how tough they are to crack.

“The two hardest, heaviest teams are in the final,” San Jose Sharks coach Peter DeBoer said after his team was eliminated by the Blues in the Western Conference final. “Everybody talks about skill and speed, there’s room for all these small players. There is a room for that. But I don’t think it’s an accident.”

It’s certainly no accident that the Bruins and Blues like to make opponents black and blue. Bruins forward Danton Heinen said physicality is what he and his teammates have tried to deliver all year long and will continue to, but the Blues figured out last round that they need to be more selective about dishing out punishment.

“You can’t just run around out there,” St. Louis forward Oskar Sundqvist said. “When you’re going to hit, you need to hit with a purpose.”

The purpose now is to lift hockey’s hallowed trophy. After Bruins center Patrice Bergeron played the 2013 final with broken ribs and a punctured lung, there’s not much guys won’t do this time of year at their own expense.

“This is the Stanley Cup. This is what everyone plays for,” Boston forward Jake DeBrusk said. “It’s going to be fun, physical and pretty intense, so hopefully the body holds up for everybody here.”

With a league-best 1.42 goals-against average and .942 save percentage, Rask is the front-runner to win the Conn Smythe Trophy as playoff MVP. Rask is in his second final as a starter after being on the Boston team that lost to Chicago in six games in 2015.

“It’s a team sport,” Rask said. “Everybody has to pull their load. That’s the only way you can win.”

All the Blues is win, win, win no matter what since Binnington made his first NHL start in early January. They won 30 of their final 45 games to get into the playoffs, and Binnington has a 2.36 GAA and .914 save percentage in the playoffs.

No goalie has won the Conn Smythe since Jonathan Quick with Los Angeles in 2012.

The Bruins and Blues play similar styles yet have very different levels of winning this time of year.

Five Boston players — Rask, captain Zdeno Chara, Patrice Bergeron, Brad Marchand and David Krejci — are still around from the 2011 Cup-winning Bruins, and Joakim Nordstrom won in 2015 with the Blackhawks. St. Louis has two players with Cup rings, though even that should have an asterisk because Jordan Nolan (2012 and 2014 Kings) hasn’t played since January and Oskar Sundqvist (2016 Penguins) only skated 20 regular-season and playoff games with Pittsburgh that year.

“Our guys that have been there, that have won a Cup, have lost a Cup, that should give us an edge,” Bruins coach Bruce Cassidy said.

Of course, a year ago the Washington Capitals had only one Stanley Cup winner in Brooks Orpik before Alex Ovechkin lifted it in Las Vegas. Armstrong is banking on his players earning their experience in the final.

“Hopefully a year from now we’ll say, geez, St. Louis has got a lot of championship experience,” Armstrong said.

To say this has been a weird playoffs would be the understatement of the league’s 101-year history. Top seeds Tampa Bay and Calgary were knocked out in the first round along with fellow division winners Washington and Nashville, and the Lightning were actually swept by Columbus.

But there has also been a strange pattern with sweeping teams that the Bruins hope is a coincidence and not a trend related to too much time off. The New York Islanders swept Pittsburgh in the first round, then got swept by the Carolina Hurricanes in the second round. Carolina? Yeah, swept in the Eastern Conference final by the Bruins.

Boston also beat Columbus after the Blue Jackets swept the Lightning, making teams that won their previous series four games to none a combined 0-3 so far.

“It’s something that naturally you’re going to think about a little bit,” DeBrusk said.

Attrition to the San Jose Sharks helped St. Louis get through West final, and despite their physicality, the Blues and Bruins have been fairly fortunate when it comes to injuries this postseason. St. Louis defenseman Vince Dunn missed the past three games with an upper-body injury but returned to practice wearing a full shield over his face, and forward Robert Thomas skated Saturday after leaving early in the third period West final clincher Tuesday.

Dunn is unlikely to play in Game 1 but could be available later in the series. Thomas is expected to play despite not practicing Sunday.

The Bruins have had a week and a half off to heal up, which is good news for captain Zdeno Chara, who was injured and didn’t play in Game 4 of the East final. They got a bit of a scare when Marchand jammed his left hand after bumping into teammate Connor Clifton during an intrasquad scrimmage to stay sharp during the long layoff.

Marchand missed practice Sunday, but coach Bruce Cassidy said it was for maintenance and expects Boston’s leading scorer to be good to go for Game 1.