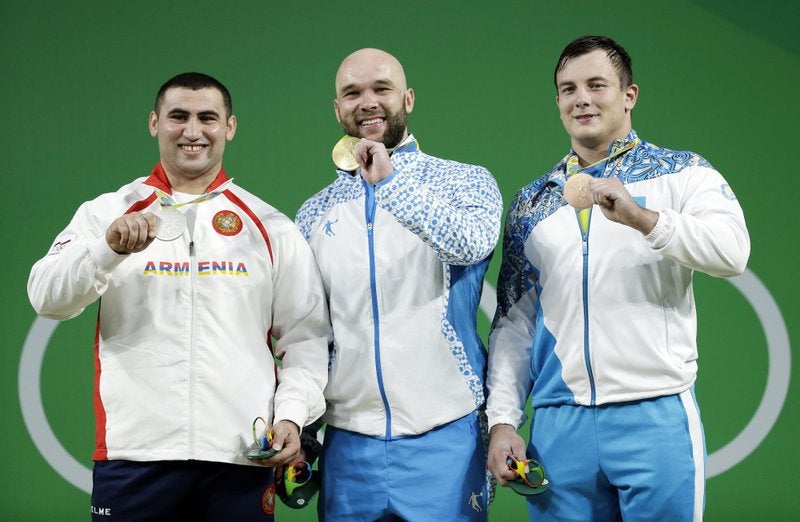 File – In this Monday, Aug. 15, 2016 file photo, Ruslan Nurudinov, of Uzbekistan, center, holds his gold medal as he is joined by silver medalist Simon Martirosyan, of Armenia, left, and bronze medalist Alexandr Zaichikov, of Kazakhstan, right, during the medal ceremony for the men’s 105 kg weightlifting event at the 2016 Summer Olympics in Rio de Janeiro, Brazil. Nurudinov has been disqualified from the 2012 London Games for doping with an anabolic steroid. The Court of Arbitration for Sport says its new anti-doping chamber stripped Nurudinov of fourth place in London in the 105-kilogram weight class. The 27-year-old lifter from Uzbekistan now faces a ban from the International Weightlifting Federation. (AP Photo/Mike Groll, File)

LAUSANNE, Switzerland — A weightlifting gold medalist at the 2016 Rio de Janeiro Olympics has been disqualified from the 2012 London Games for doping.

The Court of Arbitration for Sport’s new anti-doping tribunal stripped Ruslan Nurudinov of fourth place in London in the 105-kilogram weight class, the CAS said Monday.

He tested positive for the anabolic steroid oral turinabol in re-analysis of London samples.

The 27-year-old lifter now faces a ban from the International Weightlifting Federation, which provisionally suspended him in December.

The 105-kilogram gold medalist in London, Oleksiy Torokhtiy of Ukraine, was also provisionally suspended in December. CAS did not announce a ruling in his case Monday.

The CAS anti-doping tribunal was created to judge cases on behalf of the IOC and sports governing bodies. Verdicts can be challenged at the separate and long-standing appeals division of sport’s highest court.