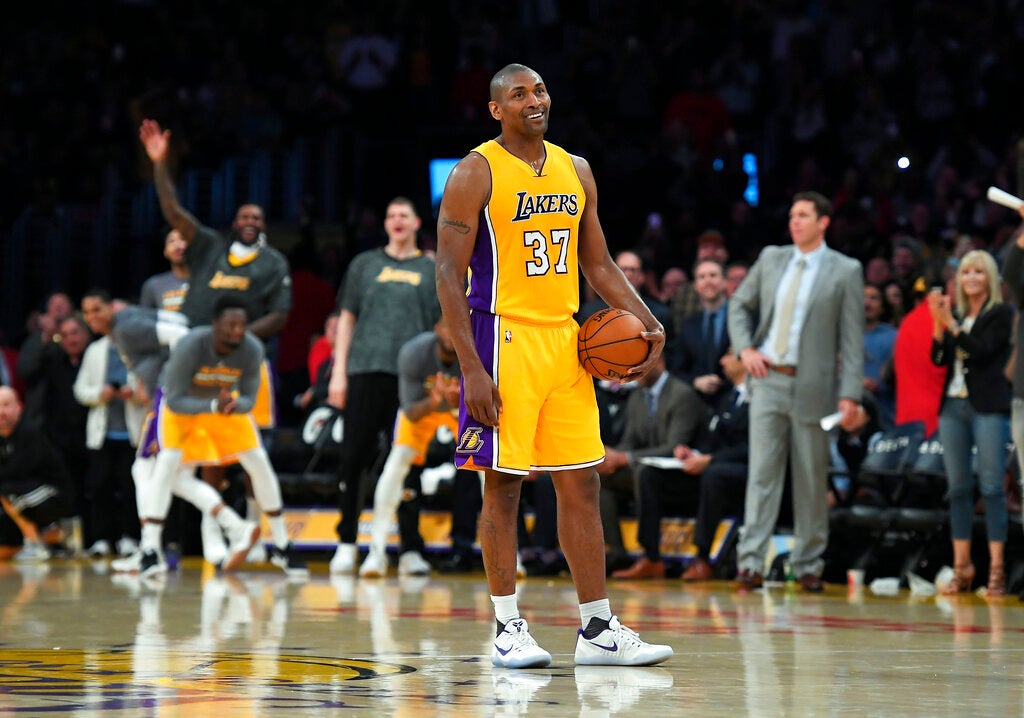 FILE – In this Tuesday, April 11, 2017, file photo, Los Angeles Lakers forward Metta World Peace stands on the court while teammates and fans cheer as the 24-second clock runs out near the end of the team’s 108-96 victory against the New Orleans Pelicans in an NBA basketball game in Los Angeles. Metta World Peace needed to win a championship ring so his career wasn’t defined only by one angry moment in Detroit. (AP Photo/Mark J. Terrill, File)

Metta World Peace needed to win a championship ring so his career wasn’t defined only by one angry moment in Detroit.

Before he could get it with the Los Angeles Lakers, though, World Peace had to heal his mind. The therapy had to come first if the former Ron Artest was to make it to Game 7 of the 2010 NBA Finals against the Boston Celtics.

“I would not have been able to deal with the adversity. I would have been ejected,” World Peace said about the therapy that finally helped lift him out of the dark places he always seemed to frequent. “I would have probably gotten into a fight or done something stupid. I don’t think the old Ron Artest would have been ready for that final.”

The old Ron Artest, of course, was best known for going into the stands in 2004 in Detroit to battle fans in what became known as “Malice at the Palace.” He was a hard-nosed defensive specialist who brought playground grudges from the housing projects in Queens onto the court, often with bad consequences.

The new World Peace was not only a good teammate but an NBA champion so thankful for his awakening that he raffled off his championship ring to help mental health causes.

On the eve of this year’s NBA Finals, World Peace is, well, at peace with himself. The 39-year-old lives happily retired in Southern California, working with developing players and developing his assorted business interests.

He’s also the subject of a new documentary being broadcast by Showtime during Mental Health Awareness Month for a reason. The documentary, which airs Friday at 10 p.m. EDT, traces Artest’s rise from a playground player in the projects to perhaps the most vilified player in the NBA and, finally, to his championship season alongside Kobe Bryant in Los Angeles.

It’s a raw look at a raw subject, though for the most part sympathetic to World Peace and his issues. It’s also a story with a happy ending, although one that World Peace wasn’t all that eager to fully tell.

“For me, I don’t really care necessarily how people look at me,” he said in a recent interview with The Associated Press. “I’m happy with just doing my daily routine and enjoying life. I’m not looking for any feedback or publicity or to build my image.”

Unlike some documentaries that use D-list celebs to recount what people might have thought, the makers of “Quiet Storm: The Ron Artest Story” go right to the sources who were involved in his life — and to World Peace himself — to tell his remarkable story.

And most of them are there, beginning with his father, Ron, who recounts playing one-on-one with his son in 10-degree weather on the courts at the dangerous Queensbridge housing project. The elder Artest made up a rule that layups were to be denied at all costs, the perfect training ground for a playing style that would carry Artest through a rough-and-tumble 17-year NBA career.

But it’s the interviews with former teammate Jermaine O’Neal that resonate the most. While World Peace has tried to make amends with those in his past, he and O’Neal are still trying to figure out how to repair a relationship that was fractured because O’Neal believes World Peace broke up an Indiana Pacers team that had the potential to win multiple NBA titles in the early 2000’s.

A good part of the documentary — which was produced by Bleacher Report — revolves around the November 2004 game in Detroit, where the defending champion Pistons took a beating at home from the up-and-coming Pacers — and then the real beatings began.

Artest remains unapologetic for going into the stands after a Diet Coke landed on his chest following a brawl that was precipitated by a hard foul World Peace made on Pistons center Ben Wallace in the final seconds of the game. He would later reach out to the man who threw the drink, though for some reason not the man he went into the stands to beat up after mistakenly believing he was the culprit.

A livid NBA commissioner David Stern suspended World Peace for the remainder of the season — which cost him $5 million in salary — and the NBA changed its rules and policies to prevent future altercations. But while World Peace would begin therapy and medication, it wasn’t until intense therapy while playing in Sacramento in 2008 finally began making him into the man he wanted to be.

He sees some of himself in Golden State’s Draymond Green, with one big difference. Green plays hard and with passion, too, but unlike World Peace knows how to set limits and stay in control.

And for that World Peace does have some regrets.

“Although I can’t go back in time I can always dream, I can always envision to myself, how it would have been if I could have had that type of attitude,” he said.

Like Green, though, World Peace can say he is an NBA champion, something he helped ensure by taking a pass from Bryant with one minute left and sinking a 3-pointer that helped seal the Game 7 win against the Celtics.

And the first thing World Peace did in his joyous on court interview afterward?

He thanked his therapist.

Read Next
PVL: PetroGazz bags back to back wins after blanking BanKo
EDITORS' PICK
SWS: Around 3.5M adult Filipinos got stranded in July due to quarantine
After Duterte push, House tackles death penalty bills amid pandemic
DOH, LGUs to go house-to-house in select brgys to identify those with COVID-19 symptoms
Water remains our saving grace right now
On becoming a champion of protection
Smart 5G goes live
MOST READ
2 Filipinos die, 6 others injured in Beirut blasts — DFA
P15 billion went to PhilHealth ‘syndicate’ – whistleblower
Arroyo hits critics of Duterte’s COVID-19 response: So easy to play Monday morning quarterback
Inflation quickens to 2.7 percent in July
Don't miss out on the latest news and information.