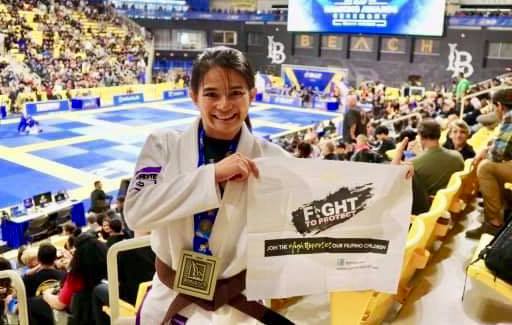 MANILA, Philippines—Margarita “Meggie” Ochoa came within a step closer to another trip atop the podium only to lose her footing through a technical miscue.

The face of the country’s promising jiujitsu program eventually settled for the bronze medal in the World IBJJF Jiu-Jitsu Championship at the Walter Pyramid in Long Beach, California.

Carving her name in the sport with a gold medal in the previous world championships, Ochoa grappled with Amber Rymartz Freitas of Team Gracie Barra in a winning position that could have sent her to another finals’ appearance.

But with 10 seconds left, Ochoa was disqualified due to technicality, bidding the title in the -48.5kg brown belt rooster weight division adieu.

“I was trying to submit the foot and we rolled into an illegal position,” said Ochoa, who defeated Luna Barea of Spain and Japan’s Iori Echigo in the preliminaries to set up a semifinal clash with Freitas.

Ochoa, seeking for a possible qualification to the 2020 Tokyo Olympics where the sport will make its debut, is focused on winning the gold medal in the coming 30th Southeast Asian Games.

Up next for the Asian Games bronze medalist is the JJAU Asian Championship in Mongolia next month.