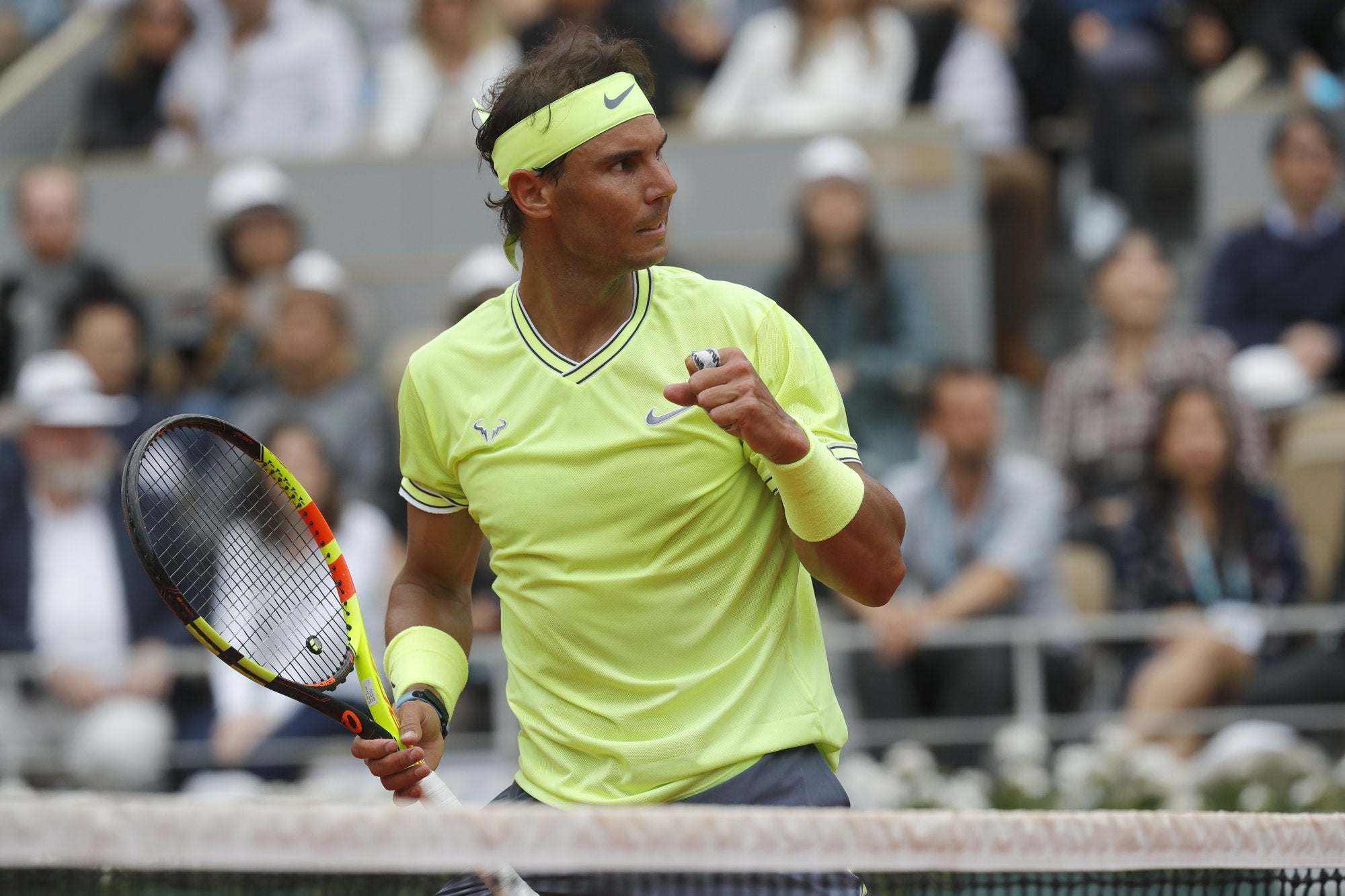 Spain’s Rafael Nadal clenches his fist after scoring a point against Austria’s Dominic Thiem during the men’s final match of the French Open tennis tournament at the Roland Garros stadium in Paris, Sunday, June 9, 2019. AP

PARIS — For a few, fleeting moments Sunday, Rafael Nadal found his French Open supremacy seemingly threatened by Dominic Thiem, a younger, talented opponent challenging him in the final for the second consecutive year.

A poor game from Nadal allowed Thiem to break him and even things at a set apiece. That development brought fans to their feet in Court Philippe Chatrier, roaring and clapping and, above all, wondering: Was this, now, a real contest? Could Thiem push Nadal more? Could he make this surge last? Would Nadal falter?

That the questions were raised at all was significant. The answers, perhaps not surprisingly, arrived swiftly. Nadal reasserted himself, as he usually does at Roland Garros, by grabbing 16 of the next 17 points and 12 of the remaining 14 games, pulling away to beat Thiem 6-3, 5-7, 6-1, 6-1 for his record-extending 12th championship at the French Open.

No one in tennis ever has won any major tournament that many times. Then again, no one ever has been as suited for success on any of the sport’s surfaces as this 33-year-old Spaniard is on red clay: Nadal is 93-2 for his career at Roland Garros, winning four in a row from 2005-08, five in a row from 2010-14, and now three in a row.

Looking at the bigger picture, Nadal is now up to 18 Grand Slam trophies, moving within two of Roger Federer’s men’s record of 20.

Thiem, a 25-year-old Austrian who was seeded No. 4 and upset No. 1 Novak Djokovic in the semifinals, was eyeing his first major title in this rematch of the 2018 final in Paris. But again, he couldn’t solve Nadal.

“First thing that I want to say is congrats to Dominic. I feel sorry, because he deserves it here, too,” Nadal said during the trophy ceremony. “He has an unbelievable intensity.”

This one began on a cloudy afternoon, with the temperature in the low 60s (mid-teens Celsius) and only a slight breeze. In the initial game — interrupted briefly by a baby wailing in the stands, drawing a laugh from other spectators and prompting Nadal to back away from the baseline between serves — three of the five points lasted at least 11 strokes.

And, thereby, a pattern was established: By the end of the 3-hour, 1-minute match, a total of 46 points went 10 strokes or more. Each man claimed half.

Both men would station themselves along the baseline and sprint, scramble, slide, stretch to somehow reach just about each and every ball that came their way, not merely putting a racket on it but responding with a booming reply. It was an impressive display of athleticism, skill and will, with Thiem managing to give just as good as he got, particularly with his ferocious backhand.

From the get-go, it was such a physical grind that Nadal was soaked with sweat and changed neon yellow shirts after seven games and 45 minutes, eliciting some whistles and catcalls from the crowd.

Early on, there were no signs of fatigue for Thiem, even though he was competing for a fourth straight day, because of rain that jumbled the schedule. Nadal, meanwhile, entered Sunday having played just once in the previous four days.

Not only that, but while Nadal dismissed Federer with relative ease in a straight-set semifinal that concluded Friday, Thiem was forced to work overtime, eliminating Djokovic in a five-setter that wrapped up less than 24 hours before the final began.

Thiem showed he can play defense. Showed he can flip to offense in a blink. Showed power off both sides. Showed precision, too, making only three of the match’s first 12 unforced errors.

Indeed, it was Thiem who nosed ahead first, closing a 12-stroke exchange by ripping a forehand winner to earn the first break point of the final, then converting it with an overhead to cap a 20-stroke point for a 3-2 edge. He turned with a clenched right hand to face his guest box, where all of his supporters were on their feet, yelling and shaking fists, too, including his girlfriend, French tennis player Kristina Mladenovic, who won the women’s doubles championship earlier in the day on the same court.

Nadal snapped to, immediately. He grabbed 13 of the set’s last 18 points, and its final four games, doing so with elan, using a drop shot to help him break Thiem for a 5-3 lead, then a serve-and-volley to help hold for the set.

That must have been demoralizing for Thiem. How couldn’t it be?

To play as well as he did, for as long as he did, going toe-to-toe with — by any measure, objective or subjective — the greatest clay-court performer ever, and even taking the lead, yet end up with absolutely zero to show for it?

At the ensuing changeover, Thiem didn’t whack a ball toward the stands, as Roger Federer memorably did during his semifinal loss to Nadal. He didn’t spike a racket or kick a tennis ball. He casually sat in his gray sideline seat, bounced his legs and chewed on an energy bar, furtively glancing to his left at Nadal.

Perhaps Thiem was thinking: Is there anything I can do?

The answer, it turned out, was “Yes.” But only briefly.

They appeared headed for a tiebreaker in the second set when Thiem broke to take it. Talk about a stunning shift: Nadal had a run in which he took 25 of 26 points on his serve, before a loss of focus, perhaps, did him in. With spectators trading between-point chants of nicknames — “Ra-fa!” and “Do-mi!” — Nadal pushed a backhand long. That gave Thiem the first set he’d managed to steal from Nadal in four career meetings at Roland Garros.

But Thiem, put simply, wilted a bit. He made three unforced errors in the fourth set’s first game to get broken at love. Thiem created an opening and Nadal barged through. By now, Nadal was creating magic at the net, and he won the point on 23 of 27 times he went forward. One drop volley was spun so marvelously that it landed on Thiem’s side, then bounced back toward the net. All Thiem could do was watch — and offer an appreciative thumbs-up.