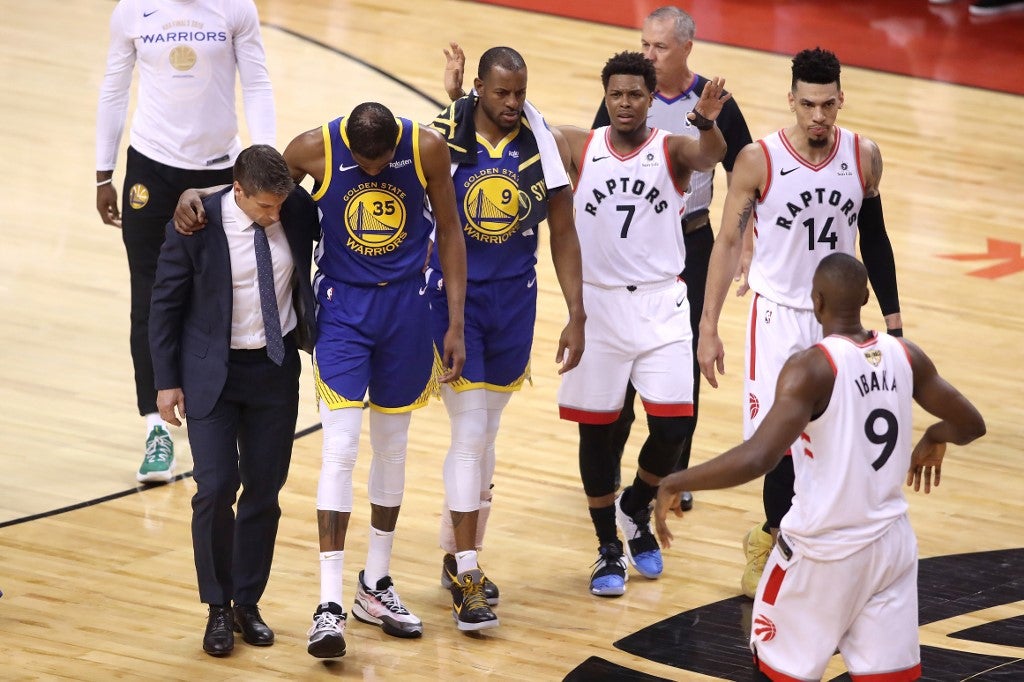 TORONTO, ONTARIO – JUNE 10: Kyle Lowry #7 of the Toronto Raptors reacts as Kevin Durant #35 of the Golden State Warriors is carried off the court in the first half during Game Five of the 2019 NBA Finals at Scotiabank Arena on June 10, 2019 in Toronto, Canada. Claus Andersen/Getty Images/AFP

When Kevin Durant fell to the court with a right Achilles injury, he sent shockwaves across the NBA, some teams having prepared for years to make him huge free agent offers in July.

Now the Golden State Warriors superstar forward is looking at a year of intense rehabilitation and another season working his way back to peak form, changing the dynamic of where dozens of top players might play next season.

Durant, who missed the past month with a right calf injury, suffered a right Achilles tendon injury in Golden State’s 106-105 NBA Finals victory over Toronto on Monday, pulling the Warriors within 3-2 in the best-of-seven series.

Suddenly the landscape of decision making has changed under NBA salary cap rules, the first domino expected to fall having been Durant’s choice.

Now maybe he doesn’t opt out of his Warriors contract and takes $31.5 million to rehabilitate in familiar surroundings with teammates who see him as a “brother.”

“This is the best player in the world. With him we are really one of the greatest teams to ever play.”

Or maybe he’s unhappy about how he was used by the Warriors while hurt and is pushed to leave even more, having already been 2017 and 2018 NBA Finals Most Valuable Player in winning his first two league crowns.

Then there is the market of NBA clubs. Do they risk a maximum offer to an injured Durant who might never again be the same dominating player he has been?

The New York Knicks, Brooklyn Nets, Los Angeles Clippers and Los Angeles Lakers are among clubs that have made moves for years to clear cap room for this moment. But Durant’s impact on the court is delayed at least a year if not longer.

Durant, who turns 31 in September, jilted Oklahoma City and star playmaker Russell Westbrook to join the Warriors after the 2016 campaign.

His fate will still impact the next teams for such stars as Toronto’s Kawhi Leonard, who can opt out of his contract even if he leads the Raptors to the NBA crown, plus Boston’s Kyrie Irving and Philadelphia’s Jimmy Butler.

Teams might also work harder for a deal with New Orleans for star big man Anthony Davis rather than take a Durant risk.

Durant’s injury factor can impact other players also. If the Nets tried to land Durant and Irving, how would a year with Durant sidelined impact both men’s desire to make the move?

Thompson and Leonard are both from Los Angeles and the Clippers could try for both. The Lakers want another star to pair with LeBron James, whose pairings with two other stars brought NBA titles in Miami and Cleveland.

As Durant hobbled out of the arena on crutches, some of the best salary cap plans of NBA clubs went with him.

Warriors basketball operations director Bob Myers, his voice breaking, offered to take the blame for playing Durant and having him incur a much worse injury than he had before, rushed back in a must-win sitiuation in the eyes of many.

“I don’t believe there’s anybody to blame,” Myers said. “If you have to, you can blame me. I run our basketball operations department.”

‘People have no clue’

If Durant thinks Myers and Golden State players reach him on that personal level, it might entice him to stay and try and add a future crown with the Warriors.

“It’s more than basketball. But no one wants to understand that part,” Warriors swingman Andre Iguodala said.

“It’s so much deeper than playing basketball for money. People still don’t really grasp what we’re talking about. When we say this is like a real brotherhood, people have no clue what goes into that and how we feel about each other.”

Durant has known the Warriors since they came to recruit him as a group in 2016 free agency.

“Life is more important in terms of caring about an individual and what they’re going through,” Warriors guard Stephen Curry said.

“When you get to know somebody and see how genuine they are, you root for those type of guys.