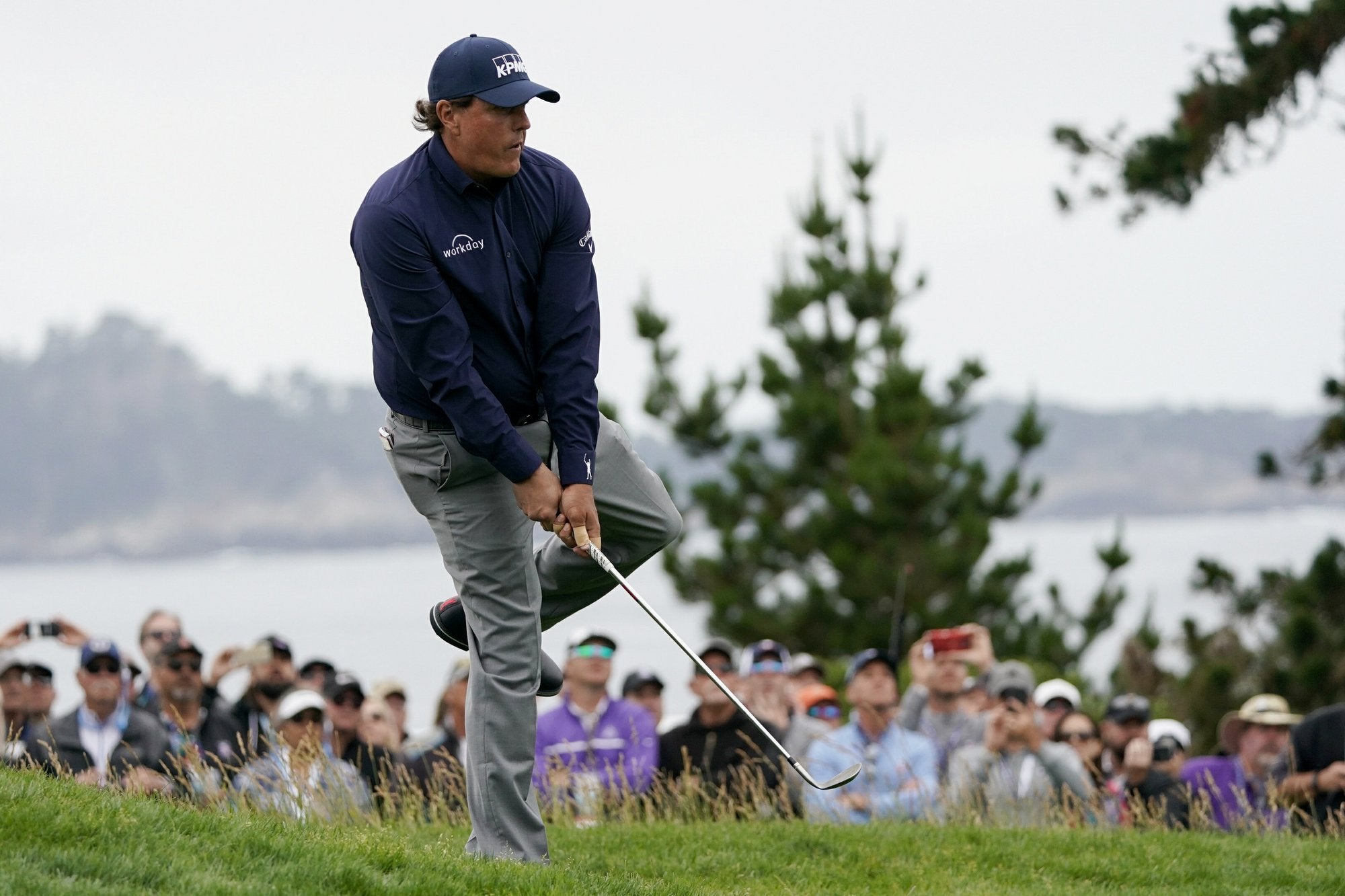 Phil Mickelson reacts to a shot on the 12th hole during the second round of the U.S. Open golf tournament Friday, June 14, 2019, in Pebble Beach, Calif. (AP Photo/Carolyn Kaster)

PEBBLE BEACH, Calif. — Phil Mickelson looks like he won’t be able to celebrate his 49th birthday by completing the career grand slam.

Needing to post a low score in the third round at Pebble Beach to get into contention Saturday, Mickelson failed to drain birdie putts early and self-destructed late to finish with a 4-over 75 and another disappointing weekend at the U.S. Open.

“Today was the day I needed to go low,” Mickelson said. “I played well enough to do it. I had many opportunities. Didn’t putt well. Didn’t get them to go in. I left them short the whole time. And then I finished poorly.”

Mickelson, who turns 49 on Sunday, heads into the final round at 3-over par and far behind the leaders as he is running out of chances to add the final piece of the career grand slam to his impressive career. Mickelson is playing his 28th U.S. Open and has a record six runner-up finishes.

This was his fifth try at completing the slam since he picked up the third leg at Muirfield in the 2013 British Open. Now he will try to become the sixth player to do it when the U.S. Open returns to Winged Foot, where he had a one-shot lead going into the final hole of the 2006 U.S. Open and made double bogey to finish a shot behind.

This might have been his best chance remaining at one of his favorite courses, where his grandfather served as a caddie back when it opened 100 years ago. Mickelson has won the regular PGA Tour stop here five times, including back in February, but will fall short once again when the biggest prize is at stake.

He missed the cut here in his first tournament as a pro in 1992, tied for 16th in 2000 when Tiger Woods posted a record-setting win, tied for fourth in 2010 and is out of contention this year heading into the final round.

“When I’m here at Pebble Beach, there’s no place that I am more grateful for the life that I’ve been able to lead and my career and my family and so forth,” Mickelson said. “And especially going back with my grandfather being here and what this place here at Pebble Beach has meant to me over the years and having so many great moments here that I can’t help but walk this golf course and feel grateful to all the great things in my life.”

While Mickelson might have been in a sentimental mood, this round won’t be one he remembers fondly.

He missed birdie putts at Nos. 7, 8 and 9 as he failed to take advantage on the scoring holes early.

Mickelson’s big problems came on the back nine with a bogey on the par-5 14th and a bogey from the bunker on the par-3 17th. And then it really came undone on the par-5 18th, when he drove left into the Pacific. He hit a wedge into a bunker and when he finally walked off the green, Mickelson had a triple bogey.

“I felt like I played a lot better than I’m scoring,” Mickelson said. “And certainly didn’t finish this round very well. I’m really happy that I had this chance, this opportunity this week.”

Mickelson even had praise for the USGA and the setup of the course after losing his cool last year at Shinnecock Hills and saying in the lead up to this year’s Open that the USGA messes up the course “100 percent of the time” if it doesn’t rain.

Mickelson tried to make a point last year with his frustration over the lightning-fast putting greens by swiping at his ball on the 13th green while it was still rolling, incurring a two-shot penalty on Saturday.

There were no complaints this year except with his own play.

“I just think that you’ve got to give credit when they do a good job like this,” he said. “They’ve done a great job. There have been many times where one or two yards’ difference in hole location would have made a world of difference, given the conditions being so tough. And this week they’ve done a good job in doing that.”