Tokyo Olympic tickets: Be prepared to be disappointed 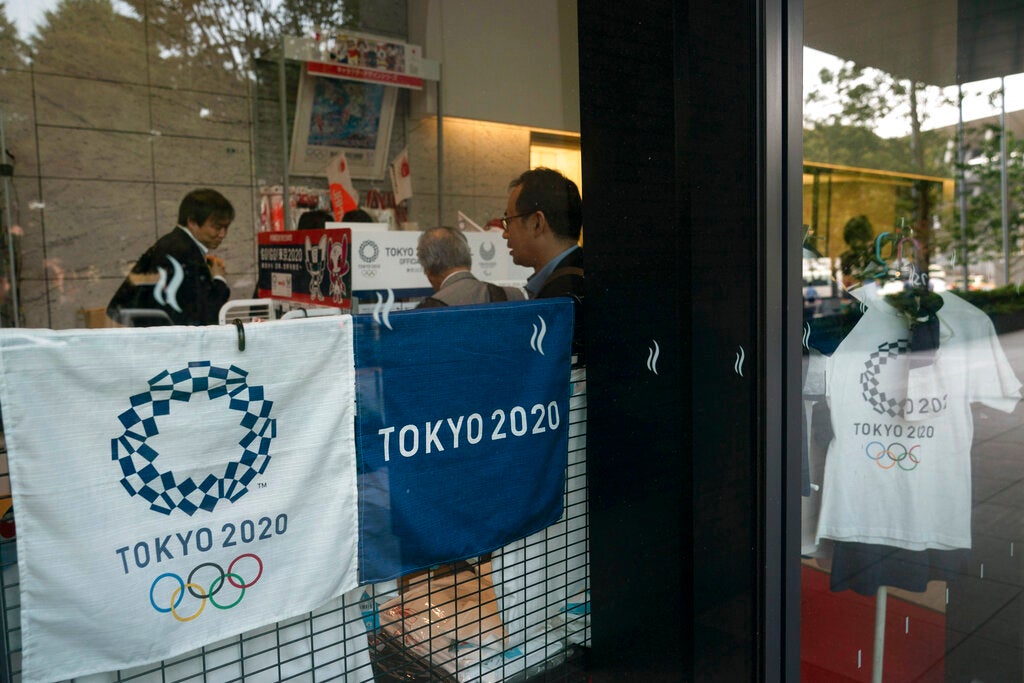 In this Wednesday, June 19, 2019, photo, people shop at a store selling Olympic souvenirs in Tokyo. Millions were going to be disappointed starting Thursday when applicants in a ticket lottery, for Japan residents, only, began learning if they landed tickets. The same will be true for residents outside Japan who could experience a similar dejection: too much demand and too few tickets. (AP Photo/Jae C. Hong)

TOKYO — Want tickets for next year’s Tokyo Olympics? Prepare to be let down.

Millions were disappointed starting Thursday when applicants in a ticket lottery — for Japan residents, only — began learning if they landed tickets. The answer is going to be overwhelmingly — no. The same will be true for residents outside Japan who could experience a similar dejection: too much demand and too few tickets.

This was not the case at the last several games — the 2018 Winter Olympics in Pyeongchang and the 2016 Summer Olympics in Rio de Janeiro — when tickets were given away and volunteers were often summoned to fill empty seats for the television cameras. At times, there were too many empty seats to fill.

“This is probably going to be the most popular Olympics, and possibly one of the most popular events of all time,” Ken Hanscom, the chief operating officer of TicketManager, told The Associated Press in an interview.

His Los Angeles-based company does not buy or sell Olympic tickets, but manages tickets for corporate clients, several of which are major Olympic sponsors.

Hanscom said he follows ticketing patterns for every major event and estimates that 80-90% of Japan residents who applied for tickets could get nothing.

“I’m interested in seeing what the reaction is and how the organizing committee addresses this,” Hanscom said. “It’s good news for the demand, and bad news on the ticket side and the public.”

Tokyo’s organizing committee was unable Thursday to say how many Japan residents got tickets, and it’s unclear if — or when — it will disclose the overall numbers. Organizers will run a second ticketing phase where the odds will probably be even worse.

Japanese media immediately began reporting about disheartened fans. Organizers said the ticket website slowed to a crawl early in the day as more than 1 million people tried to learn their fate. A completely unscientific AP survey of a few fans showed one ticket awarded in 15 application attempts.

The millions who failed got this message in email from Tokyo organizers: “Thank you for your interest in purchasing Tokyo 2020 tickets. The demand for tickets was incredibly high, and unfortunately, you were not awarded any of the tickets you requested in the lottery.”

Tokyo organizers say that 7.5 million residents of Japan registered to apply for tickets through the lottery system. Extrapolating from the 2012 London Olympic lottery, Hanscom estimates that Tokyo organizers may have received 70-85 million individual ticket requests. This could be at least 10 times more than what’s available. Maybe more.

Organizers estimate there are 7.8 million tickets for all Olympic events, but 20-30% of those are for distribution outside Japan where buyers could face the same problems and end up paying more.

Buyers outside Japan must get tickets from Authorized Ticket Resellers, companies appointed by national Olympic committees. They were authorized to begin sales on Thursday.

The reseller for the United States is CoSport, which also handles sales in Australia, Jordan and several European countries. Cartan is the reseller for much of Latin America including Mexico.

Resellers are allowed to charge a 20% handling fee on every ticket. They can also use a generous currency exchange rate, and often package desirable tickets with top hotels that charge way over the usual going rate during the Olympics.

Ticket prices for buyers in Japan vary greatly and are listed in the competition section on the organizers’ website.

Even with the soaring demand, many venues could still wind up with hundreds of empty seats that are typically set aside for International Olympic Committee officials, corporate sponsors, and local dignitaries. Often they don’t show up while angry fans line up outside without tickets.

“I expect there will be a problem in Tokyo,” Hanscom said. “The industry figure is that 40% of tickets that sponsors buy go in the trash,” he said. He said the problem was acute for the Olympics and World Cup.

“Every Olympics you have a new group of people running ticketing,” he said. “And you have new technology. So you’re always scrambling to put the process together.”

Even athletes could have a tough time landing many tickets for family members and friends.

“The United States Olympic Committee has confirmed it will continue its program of supplying Team USA athletes with two complimentary tickets for each event they compete in,” the USOC told AP in a statement. The USOC said this was in addition to tickets coming from the organizing committee.

Hanscom pointed out that “many countries don’t make the same gesture, and many athletes who qualify late have added problems.”

Given the shortage, scalping is sure to be a big problem, as it is at every Olympics and soccer World Cup.

The ticketing system for the Olympics and soccer’s World Cup is murky, allowing for abuse, anger, and confusion with tickets often appearing in the hands of high-ranking officials.

Three years ago at the Rio de Janeiro Olympics, International Olympic Committee member Patrick Hickey of Ireland was arrested on suspicion of ticket scalping. He is suspended from the IOC, but remains a member and has denied any wrongdoing. This was not the first time that a high-ranking member of the IOC or FIFA — soccer’s governing body — was implicated in profiteering on the black market.

Hanscom predicted a “vibrant secondary market” will appear despite a law that went into force a few days ago in Japan that prohibits ticket scalping with the penalty of a 1 million yen ($9,100) fine and a one-year jail term — or both.

However, the law has a large loophole and does not apply to tickets distributed for free or given away as gifts, or tickets without a purchaser’s name. This could apply to many tickets coming from the IOC, the 200 national Olympic committees, or some major Olympic sponsors.

Local Japanese Olympic sponsors have paid over $3 billion in sponsorship fees, and also sure to get a slice of tickets before they hit the public market.

“What I always say is that tickets are temptation,” Hanscom said. “It’s going to be challenging to enforce sales that happen internationally. I would expect there to be a large market that’s outside the rules and regulations. These types of rules are not going to constrict the biggest brokers who have been doing this for 20 years.”

Read Next
Furious rally
EDITORS' PICK
Honolulu Café is the cure for your Egg Tarts and Roastings cravings
Luxe property: A way to build, preserve wealth
House energy committee chair Arroyo bats for cheap electricity
DOJ-led panel drops 29 cases of torture, EJKs
Duterte signs law giving rights, more protection to foundlings
Comelec won’t proclaim party-list groups yet
MOST READ
Heart Evangelista gets a ‘no’ from Chiz Escudero after asking, ‘Do I deserve a bag?’
Man posing as Marcos spox revealed to be an inmate in Bilibid — Guevarra
CebuPac places pilot under disciplinary review after ‘baseless’ post vs Robredo
3 Iloilo residents found with Omicron subvariant
Don't miss out on the latest news and information.