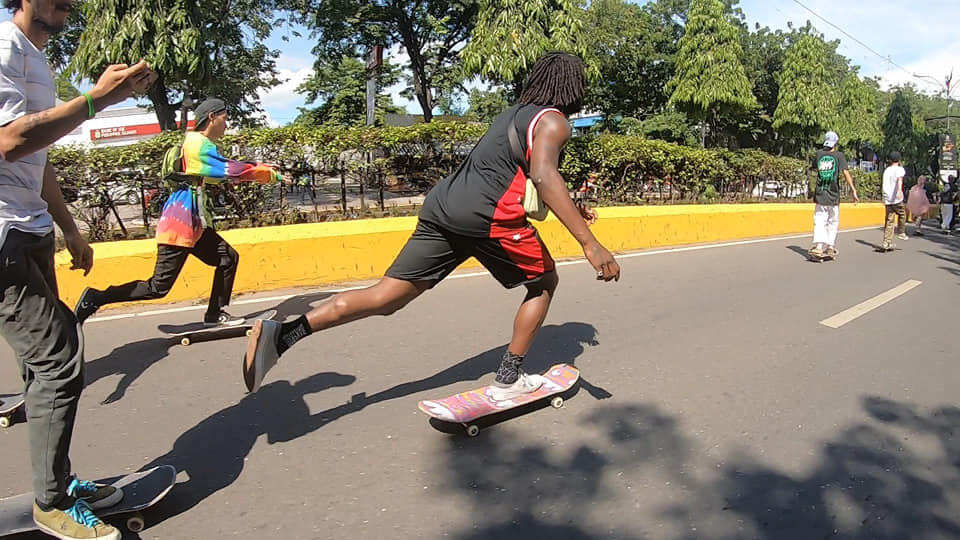 At least 400 skateboarders skate from Fuente Osmena to Plaza Independencia in downtown Cebu City to open the World Go Skateboarding Day on Friday. An exhibition competition with the local skateboarding community was scheduled on Saturday. Contributed

CEBU CITY — Visiting international skateboarding superstars saw a huge potential for skateboard athletes in Cebu City but they lacked the “park” where they can develop their skills.

The four skateboarding champs were surprised at how “huge” the skating community here in Cebu, which is also home to Asian Games skateboarding Gold Medal winner Margielyn Didal.

But they noticed that Cebu City skateboarders had to park to hone their skills.

“The level of skating is way high. These kids really need a skatepark so that it is where they go to skate. They really need that. All they need a facility where they can go and skate,” said Melbourne’s Shaun Paul in an interview.

For Cyril Jackson, the potential of getting more local skateboarding champs are happening. “The epidemic is already starting,” the DC brand endorser said.

Ramirez on the other hand, said if people want to help these kids become superstars, “then they should get that (skating) park (built) out there.”

While there are no skateparks yet in Cebu City, Jackson said private lots should share the space to skaters.

“They should somehow share the concrete that they have. They should allow you to skate more often and not getting chased by some security off.”

“Just give the securities some Sunday’s off,” Jackson quipped.

Lawton, on the other hand, said the skatepark need not be too expensive. All the skaters need are just a bunch of space where they can play.

Four of the world’s skateboarding superstars are in Cebu for a series of events including the World Go Skateboarding Day last Friday and an exhibition competition with the local skateboarding community on Saturday.

Last Friday, June 21, at least 400 skateboarders registered and joined the “push rally” where they skated from Fuente Osmena Circle to Plaza Independencia park, a distance of about 4 km.

After Didal won the Gold Medal in the Asian Games, the Cebu City government promised to build a skatepark for local athletes here. The promise is still in the site development stage in the construction.

The four skateboarding superstars are in Cebu to kick off their Southeast Asian tour.

Local skateboarding champion, 13-year-old Renz Gilig of Barangay Pajo in Lapu-Lapu City was in awe as his idol skateboarders came down to Cebu.

Gilig, who was one of the winners in the amateur skateboarding competitions in Manila and Iloilo cities, immediately asked four international athletes to sign his skateboard. (Editor: Leti Z. Boniol)