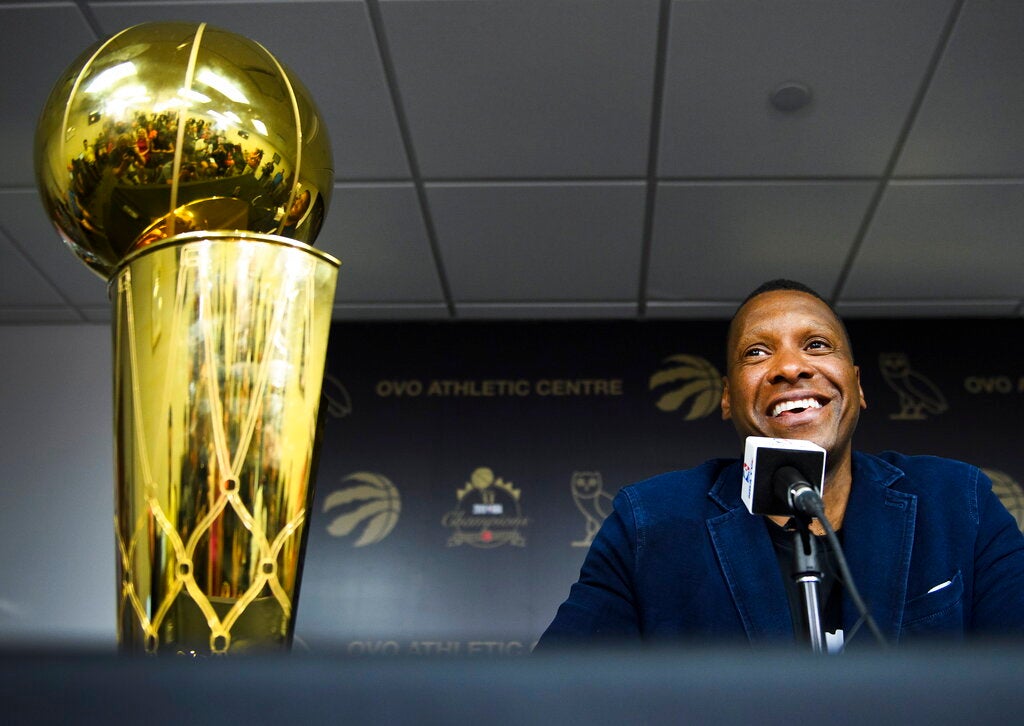 TORONTO — Still absorbing the magnitude of his team’s accomplishment, Raptors President Masai Ujiri is confident Kawhi Leonard and the rest of Toronto’s core will reunite next season in a bid for another title.

“We’re on to the next issue, which for us is coming back and being champions again,” Ujiri said Tuesday in his first news conference since Toronto won its first title nearly two weeks ago. “We want to experience this moment here again and again and again.”

Retaining Leonard is the most pressing issue. The two-time finals MVP is expected to opt out of the final year of his contract and become a free agent. Toronto can offer a five-year deal worth about $190 million — one year and some $50 million more than any other team.

“I know what we’ve built here,” Ujiri said. “I’m confident, and you see how these things go.”

“I said we have to be ourselves, and we were ourselves for the whole year,” Ujiri said. “I think he saw that. I think we built a trust there.

“I believe winning a championship, him seeing who we are, working with his medical staff combined with our medical staff and getting him to where he wanted to be,” Ujiri added.

Injured for all but nine games in his final season with San Antonio, Leonard played 60 games this season and another 24 in the playoffs. After averaging career bests of 26.6 points and 7.3 rebounds in the regular season, Leonard raised his averages to 30.5 and 9.1 in the playoffs.

Ujiri says he and Leonard have had multiple talks the past several days, discussions he called “positive.”

The Raptors will stay in touch and meet formally once free agency begins Sunday. After that, Ujiri is not worried about how long Leonard takes to decide.

“I texted Kawhi last night, I talked to his uncle this morning,” Ujiri said. “For us, there’s that trust regardless of wherever it goes, and there’ll be constant communication.”

Center Marc Gasol also has a player option for next season, and guard Danny Green is a free agent.

“I think they know what the effect of Kawhi’s decision is, but we’re really approaching it like we want to bring everybody back on this team,” Ujiri said. “That’s a priority for us.”

Less urgent is a potential extension for forward Pascal Siakam, a runaway winner of the NBA’s Most Improved Player award. The parties plan to meet during the summer league.

“Pascal has gotten to a place where he’s definitely a priority for us and it’s definitely going to be a conversation that we’ll have,” Ujiri said.

Ujiri said little about his confrontation with a deputy following the Game 6 clincher. The deputy’s lawyer, David Mastagni, says his client is on medical leave with a concussion and jaw injury and is considering a lawsuit.

Ujiri says his lawyers are updating him about the investigation.

“I am confident about who I am as a person, my character and as a human being,” Ujiri said. “For now, I’ll just respect their process there and wait for the next steps.”

“My kids are Canadians,” he said. “For me, the blessing is being wanted here and finding a place that makes you happy and finding challenges that really make you grow as a person.”

As for celebrating the NBA title with political leaders, Ujiri says the team has yet to decide on a White House visit if invited. He adds that seeing Canada’s prime minister would be a “priority.”

Ujiri did have one regret Tuesday — not bringing the Larry O’Brien Trophy with him. But minutes before the news conference ended, the golden trophy arrived and was placed on the table next to him. Ujiri carried it out as he left.