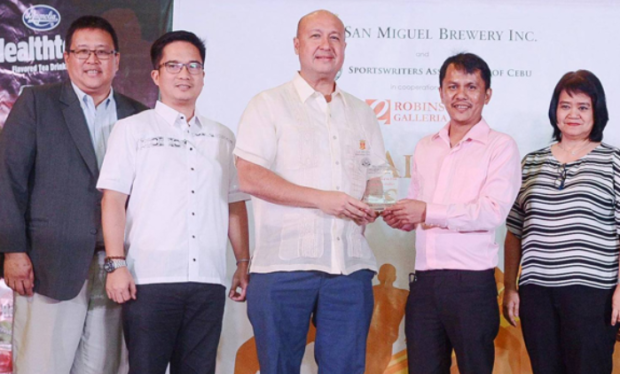 Jean Henri Lhuillier was named the Sportsman of the Year in 2018 by the Sportswriter Association of Cebu. This award was given in recognition of Lhuillier’s significant contributions to sports in the country.

Jean Henri Lhuillier, a long-time Philippine Sports patron, was awarded last year as Sportsman of the Year in the 36th Sportswriter Association of Cebu (SAC) Awards.  The recognition was well-deserved by someone who has served and supported Philippine Sports for more than 3 decades in the fields of basketball, tennis, softball, while throwing support also to select athletes in bowling and swimming.   Lhuillier was recognized for his efforts in sports grassroots development and support to national teams in softball and tennis in the country.

“It was a recognition that I do not take lightly; it encourages me to continuously do my part in bringing glory to Philippine sports,” said Lhuillier who is also the President of the Amateur Softball Association of the Philippines (ASAPHIL) and the Unified Tennis Philippines (UTP).

Nowadays, Lhuillier has been focusing on bringing Philippines to the summit of softball and tennis greatness. Lhuillier is the man behind former world number 17 doubles player Treat Huey and Ruben Gonzales who currently represents the nation in some of the world’s greatest tennis tournaments such as Davis Cup and tennis grand slams.

Lhuillier is also the man behind the 2020 Tokyo Olympics quest for the RP Blu Girls, who has made an impressive run in world–class softball tournaments securing wins over world’s top 10 teams such as Australia, Canada, China, Chinese-Taipei, Mexico, along the way.

Despite all these achievements, Lhuillier is not about to stop yet.   “I’m just getting started.  I have high hopes for both Philippine softball and tennis and softball as these are 2 sports that I firmly believe that we have what it takes to be the world’s best and I vow to give my best to make these dreams a reality,  said Lhuillier.”

Through the Unified Tennis Philippines which he co-founded and now spearheads as its president, Lhuillier has planned out 104 tournaments nationwide from open, age-group and club tournaments.  National junior teams’ exposure to tough tournaments in Asia are lined up also as well as continuous support of top players Huey and Gonzales.

For softball, Lhuillier ensures that RP Blu Girls’ quest for an Olympic slot goes in full swing with major tournaments lined up such as the USA World Cup, Canada Cup, and the Asia-Oceania Qualifying tournament in Shanghai, China on September before ending their 2019 campaign in the Southeast Asian Games.  Lhuillier has high hopes also for the RP Blu Boys and he has lined up the World Men’s Championship in June and the Southeast Asian Games for the men’s softball team.