LeBron James gives jersey no. 23 to Anthony Davis as he returns to 6 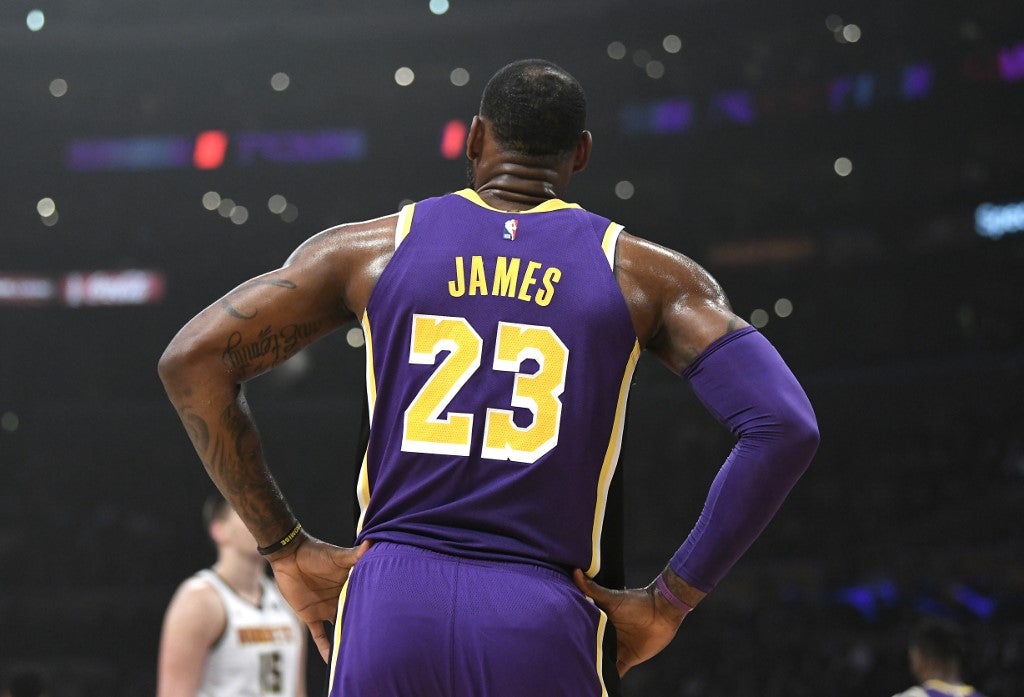 (FILES) In this file photo taken on March 6, 2019 a detail of the jersey of LeBron James #23 of the Los Angeles Lakers is seen during the first quarter against the Denver Nuggets at Staples Center in Los Angeles, California. – LeBron James will give up his number 23 jersey to new Los Angeles Lakers teammate Anthony Davis, who will sacrifice a trade bonus to help finance NBA free agency moves, ESPN reported June 27, 2019. James has worn number 23 during both stints with the Cleveland Cavaliers and with the Lakers last season after he departed his hometown club a year ago in free agency. (Photo by ROBERT LABERGE / GETTY IMAGES NORTH AMERICA / AFP)

James has worn number 23 during both stints with the Cleveland Cavaliers and with the Lakers last season after he departed his hometown club a year ago in free agency.

Davis wore number 23 for seven seasons while playing for the New Orleans Pelicans.

Citing unnamed sources, ESPN said James will return to wearing the number 6 jersey he used while winning his first two NBA crowns during a four-season stint with the Miami Heat.

A trade deal for Davis will be completed on July 6, when free agent contract signings can be announced, but details about the move revealed Thursday indicated the Washington Wizards are now involved in the transaction.

The Lakers will have $32 million to spend in free agency under NBA salary cap rules, according to ESPN, after the Lakers sent Mo Wagner, Isaac Bonga and Jemerrio Jones to Washington to maximum clear salary-cap space.

Davis has also agreed to waive a $4 million trade bonus to create additional salary cap space that would enable the Lakers to pursue another maximum level NBA free agent.

The move allows the Lakers to build a supporting cast around James and Davis, who could combine into a formidable Lakers duo in the mold of Shaquille O’Neal and Kobe Bryant or the Lakers’ 1980s “Showtime” era stars Magic Johnson and Kareem Abdul-Jabbar.

The Lakers could also go for another top-level talent to form a star trio the way James did with Dwyane Wade and Chris Bosh in Miami or alongside Kevin Love and Kyrie Irving in Cleveland.

To help complete the Davis to LA deal, the Wizards will send money to the Pelicans and the Lakers will send a 2022 second-round NBA Draft choice to Washington.

The Lakers were expected to make a run at 2014 and 2019 NBA Finals Most Valuable Player Kawhi Leonard, a Los Angeles native coming off a championship run with the Toronto Raptors.

The Los Angeles Clippers are also expected to meet with Leonard next Tuesday while the Raptors reportedly will be allowed to make the last presentation to Leonard next week before he decides on his options for next season.