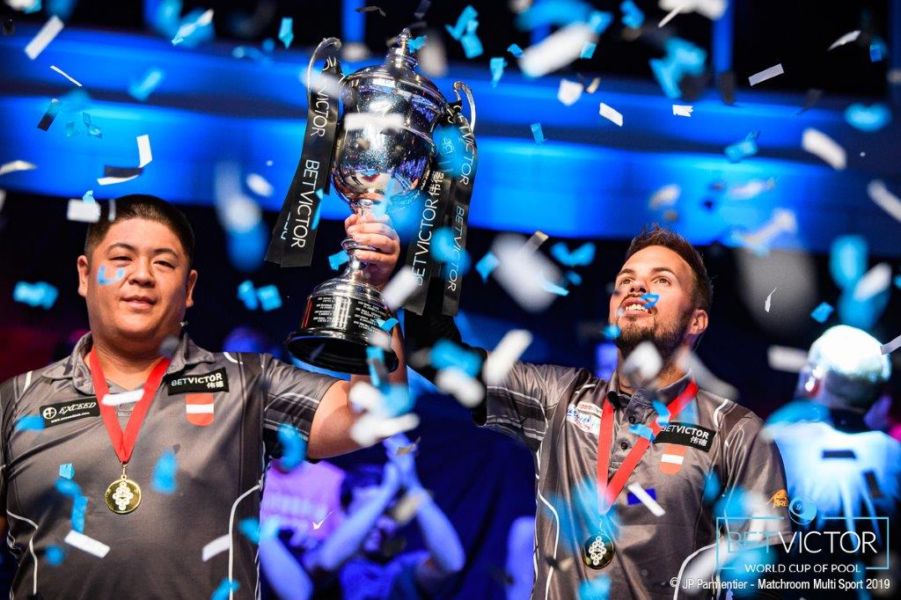 Mario He and Albin Oushcan of Austria hoist the trophy after beating Carlo Biado and Jeff De Luna of the Philippines in the 2019 World Cup of Pool final in Leicester, United Kingdom. Photo from matchroompool.com

The Philippines’ Carlo Biado and Jeff De Luna bowed to Austria’s Mario He and Abin Oushcan in the 2019 World Cup of Pool final Sunday at Morningside Arena in Leicester, United Kingdom.

“I feel really great, I am really happy to win,” said He. “It means the world, especially playing with Albin. We play great together and it is a joy for me to play with him.

“I was a little nervous in the first round but Albin helped me out and after that I played really well. I didn’t feel like this when we won in 2017.”

It was the second time in three years that He and Oushcan won the title after hoisting the trophy in 2017.

The Philippines entered the championship round after turning back Netherland, 9-6, in the semifinal.

Austria, meanwhile, also made short work of Spain, 9-3, in their semifinal matchup.