Warriors owner: No other player will wear Kevin Durant’s No. 35 | Inquirer Sports

Warriors owner: No other player will wear Kevin Durant’s No. 35 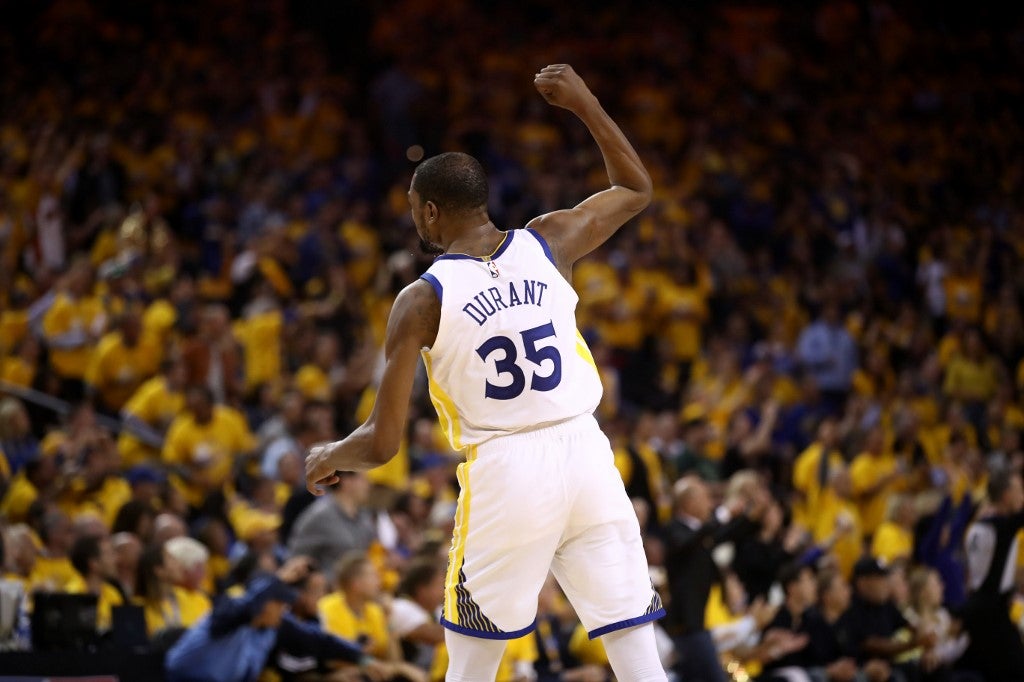 OAKLAND, CALIFORNIA – MAY 08: Kevin Durant #35 of the Golden State Warriors reacts during their game against the Houston Rockets in Game Five of the Western Conference Semifinals of the 2019 NBA Playoffs at ORACLE Arena on May 08, 2019 in Oakland, California. NOTE TO USER: User expressly acknowledges and agrees that, by downloading and or using this photograph, User is consenting to the terms and conditions of the Getty Images License Agreement. Ezra Shaw/Getty Images/AFP

OAKLAND, Calif. — Golden State Warriors owner Joe Lacob is showing his appreciation for Kevin Durant’s contributions to three successful seasons by promising that no other player will wear jersey No. 35 as long as Lacob is team chairman.

Lacob released a statement Monday thanking Durant, the two-time NBA Finals MVP who helped the Warriors win back-to-back championships in 2017 and ’18 before his postseason was shortened by injury this year. Durant on Sunday announced he would be signing a contract to join the Brooklyn Nets.

He is expected to miss all of next season while he recovers from surgery for a ruptured right Achilles tendon suffered in Game 5 of the finals, which Golden State lost in six games to the Toronto Raptors.

“Today, as he starts a new chapter in his incredible career, we thank KD for all of his contributions, for being an integral part to one of the most prolific runs in NBA history and wish him well as he continues his Hall of Fame journey,” Lacob said. “As long as I am Co-Chairman of this team, no player will ever wear (No.) 35 for the Warriors again.”

Golden State had hoped Durant would choose to stay for about $221 million over the next five seasons, but he chose to join the Nets and play alongside Kyrie Irving instead.

On behalf of the franchise, Lacob applauded Durant for his efforts on and off the court representing the Warriors.

“Three years ago, we were thrilled with the arrival of Kevin Durant, a transformative NBA player and one of the best to ever play the game,” Lacob said. “He provided our fans and franchise with numerous highlights during his stay here_two NBA championships, two NBA Finals MVPs, three trips to the Finals, unparalleled efficiency_and carried himself with class and dignity both on and off the court. His commitment to our community was evident each day, including last season when his philanthropic efforts earned him the NBA’s annual Community Assist Award.”

Warriors coach Steve Kerr made it clear when the season ended everyone understood Durant had earned the chance to pursue every opportunity.

“I know that we all want him back, and we think this is a great situation for him and vice versa,” Kerr said. “So, hopefully we get him back and keep this thing going with the understanding that he’s a free agent and we want what’s best for him, and he’s free to make any choice he wants. Hopefully he’s back, and we will all give him any advice, any counsel that he needs. And ultimately he’s going to make his own decision. He’s earned that.”

On June 12, the 30-year-old Durant posted a photo on Instagram showing himself in a hospital bed and announced his surgery. He had returned two nights earlier from a nine-game absence with the calf injury. When he got injured again, a teary, emotional Warriors general manager Bob Myers asked anyone who was looking to place blame to do so on him — not on Durant, the medical staff or athletic trainers who worked so tirelessly to get him back.