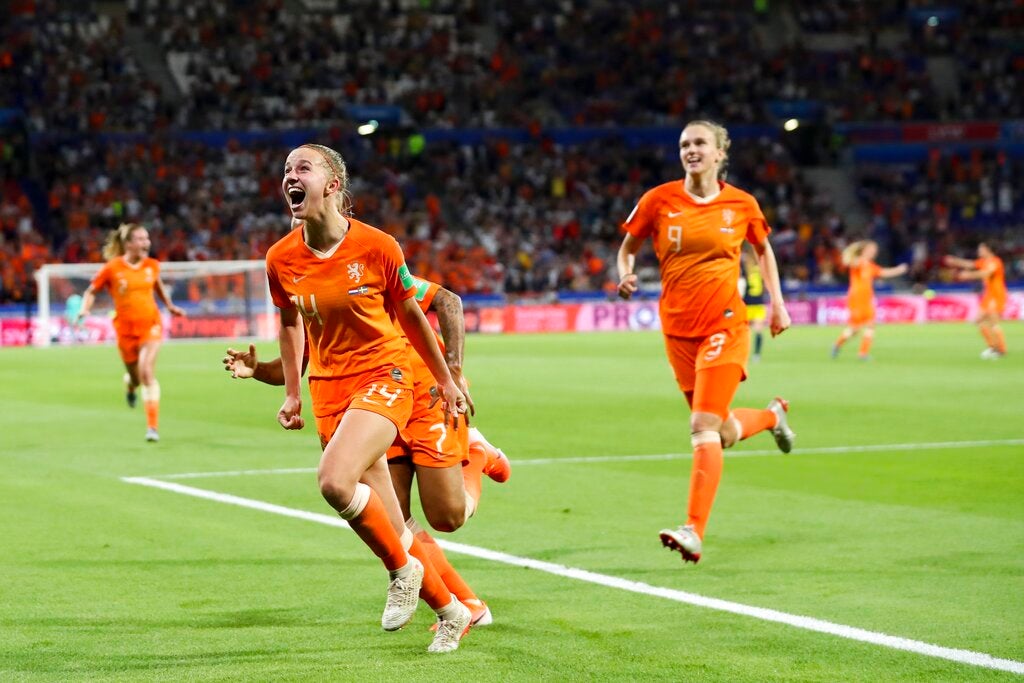 LYON, France — Netherlands midfielder Jackie Groenen’s route to the World Cup final has been unusual by any standards, one which saw her starring at judo before attempting to represent a different nation at football.

Born in the Netherlands, the 24-year-old Groenen grew up in a small Belgian village in the province of Antwerp. She won two Dutch judo championships at the youth level and another at the under-20 level, and also took the bronze medal at the European Cadets Championships in 2010.

But after breaking a hip she committed herself to football.

Surprisingly, perhaps, it wasn’t Holland she envisaged playing for at senior level. Five years ago FIFA rejected her request to switch to Belgium. She must be relieved football’s governing body denied her wish.

Because her extra-time strike in a 1-0 win against Sweden on Wednesday night took the Dutch women’s side into their first World Cup final, and fourth overall for the football-mad Orange-shirted fans after three losses in the final by the men. The Netherlands face the United States in the championship game on Sunday.

The first of those was in 1974 — when the astonishingly skilled Johan Cruyff was the talk of world football.

Just like Cruyff, her football idol, Groenen proudly wears the No. 14 jersey.

It was hard not to admire Cruyff, who died in 2016, because he was such a ground-breaker.

The brazenly skillful forward dared to wear No. 14, for example, when outfield players traditionally only wore Nos. 1-11, and now players can choose 99, 77, 44 or any other number they cherish.

But Cruyff mostly caught the eye because of his mesmerizing ball control, allied to his searing pace and twinkling feet.

He helped the Dutch men’s team expand football minds by establishing the concept of Total Football, whereby all outfield players are seamlessly interchangeable on the field, allowing them to switch positions without affecting the shape of the side.

It was so easy on the eye, but incredibly difficult to defend against when orchestrated properly by Cruyff and his long-haired gang. All the players had to be technically proficient and skilled, even defenders. The Dutch thrilled fans with this wonderful new concept in the 1970s — and reached the World Cup finals in 1974 and ’78.

In the ’74 final, the Dutch took the lead in the second minute from the penalty spot, after Cruyff was hacked down following a slaloming run, but lost to West Germany 2-1.

It was also at that tournament where Cruyff produced a magical move now engrained in football folklore — the Cruyff Turn.

Receiving the ball near the byline, with a Swedish defender on his back, he flicked it behind his standing leg while turning at full speed.

Cruyff bemused the Swedish defense that day, and fittingly there was some slick Dutch technique in Groenen’s extra-time winner against the Swedes again on Wednesday night.

Three players combined intricately with quick passes, setting her up for a low and clinical shot from just outside the penalty area.

“I just saw a nice angle,” Groenen said modestly after the game.

A modesty explained by the fact it was only her third international goal in 53 appearances.

“We’ve been discussing this for a couple of weeks; that I need to shoot more. The ball came really nicely, so I just thought, ‘Let’s do it,'” she said with her trademark grin. “I think (midfielder) Danielle Van de Donk is very proud of me, because she told me to take these shots.”

A first World Cup goal for a player used to firsts. Groenen became the first overseas signing for Manchester United after the recently formed women’s team was promoted to England’s Super League in May.

She has her mind set on another first — a desperately-awaited World Cup title for the Dutch.

The men and women have won the European Championship once.

Inspired by the flamboyant Ruud Gullit and Marco van Basten, the men won Euro in 1988 in West Germany.

The women matched that by winning Euro 2017 on home soil, thanks largely to the scoring prowess of striker Vivianne Miedema.

Now they have a chance to go one better than the men, who lost another World Cup final in 2010.

On Sunday, they must beat the defending champion United States, the lavishly skilled tournament favorite gunning for a fourth title.