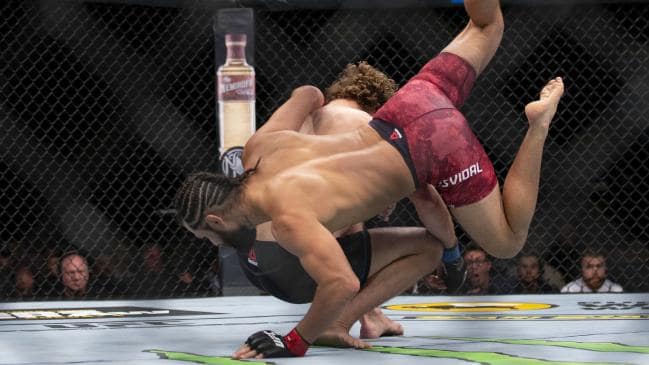 Jorge Masvidal, lands a flying knee on Ben Askren at the start of their welterweight mixed martial arts bout in UFC 239. AP

Jorge Masvidal knocked out Ben Askren with a sensational flying knee just 5 seconds into their bout at UFC 239.

Masvidal delivered the fastest knockout in UFC history in jaw-dropping fashion. After listening to the opening bell while touching his own fence, Masvidal took three running steps out of his corner and sailed directly into the face of Askren (19-1), who had never been beaten in his 10-year pro mixed martial arts career.

Masvidal and Askren had exchanged numerous insults in the promotion for their bout. Masvidal landed two punches to the unconscious Askren’s head before the referee could stop the bout.