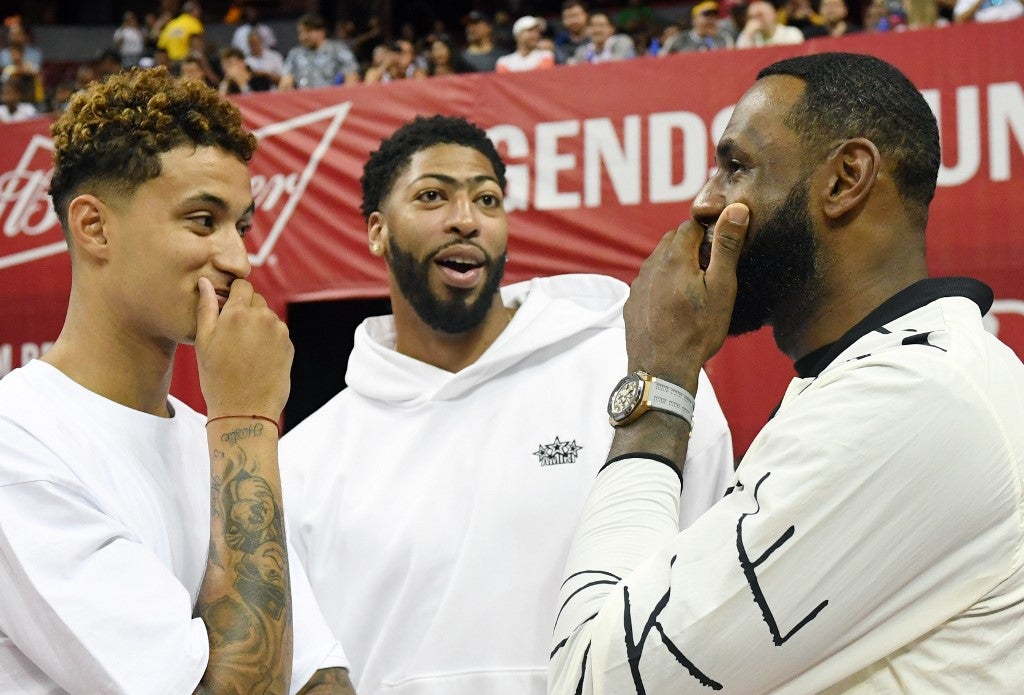 LAS VEGAS, NEVADA – JULY 06: (L-R) Kyle Kuzma, Anthony Davis and LeBron James of the Los Angeles Lakers talk before a game between the Lakers and the LA Clippers during the 2019 NBA Summer League at the Thomas & Mack Center on July 6, 2019 in Las Vegas, Nevada. Ethan Miller/Getty Images/AFP

The Los Angeles Lakers made it official on Saturday, announcing they have signed forward Anthony Davis, who they hope will form a dynamic one-two punch with superstar LeBron James.

“Anthony Davis is arguably the most dominant all-around young player in today’s NBA,” said Lakers general manager Rob Pelinka. “Anthony represents everything we stand for, with his unwavering commitment to excellence as both a person and athlete.

“This is a historic moment for the Lakers franchise, and we couldn’t be more proud to have him.”

The Davis signing took place on the first day NBA teams were allowed to officially sign free agents to contracts that were already negotiated over the past week.

The Lakers reiterated in their statement that they have acquired Davis in a trade from the New Orleans Pelicans in exchange for Lonzo Ball, Josh Hart, Brandon Ingram, the draft rights to De’Andre Hunter, two first-round picks, and cash.

As part of the trade, the Lakers also sent Isaac Bonga, Jemerrio Jones, Moritz Wagner and a second-round draft pick to the Washington Wizards, who in return, sent cash consideration to the Pelicans.

Davis is a six-time NBA all-star who has averaged more than 23 points per game through seven seasons with New Orleans, who drafted him with the first overall pick in 2012.

The Lakers announced several other signings on Saturday, including deals with Quinn Cook, DeMarcus Cousins, and Danny Green.

A four-time all-star, Cousins has played in 565 career games for Sacramento, New Orleans, and Golden State, averaging 21.2 points and 10.9 rebounds.

The Lakers did not release any details about the deals but the US media reported that Cousins’ deal is for one year and worth $3.5 million.

The Miami Heat were also believed to be interested in Cousins but Davis, a former teammate of Cousins with the Pelicans, helped convince him to go to Los Angeles.

Cook was a member of the 2018 Golden State championship team.