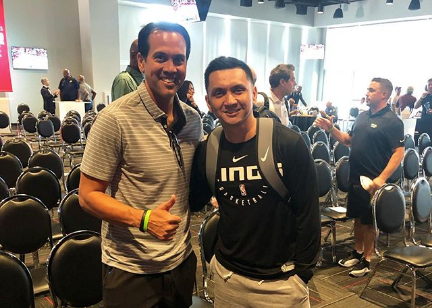 MANILA, Philippines—Jimmy Alapag is surely making the most out of his experience as an assistant coach of the Sacramento Kings in the NBA Summer League.

Alapag on Sunday even got the chance to meet up with Miami Heat head coach Erik Spoelstra in Las Vegas for the NBA Coaches Summit.

“Great seeing two-time NBA Champion of the Miami Heat Erik Spoelstra here at the NBA Coaches Summit in Las Vegas,” wrote Alapag on his Instagram post. Honored to listen and learn from some of the best minds in the game.”

Alapag previously led Alab Pilipinas to the 2018 ASEAN Basketball League title and is one of the most decorated Filipino basketball players, having won six PBA titles, a PBA MVP plum, and named as one of the PBA’s 40 Greatest Players.

The 5-foot-9 point guard is also a two-time silver medalist in the Fiba Asian Championship and a two-time winner in the Southeast Asian Games.

Spoelstra, meanwhile, is of Filipino-American descent and led the Heat to two straight titles in 2012 and 2013 and coached future Hall of Famers LeBron James, Dwyane Wade, Chris Bosh, and Ray Allen.