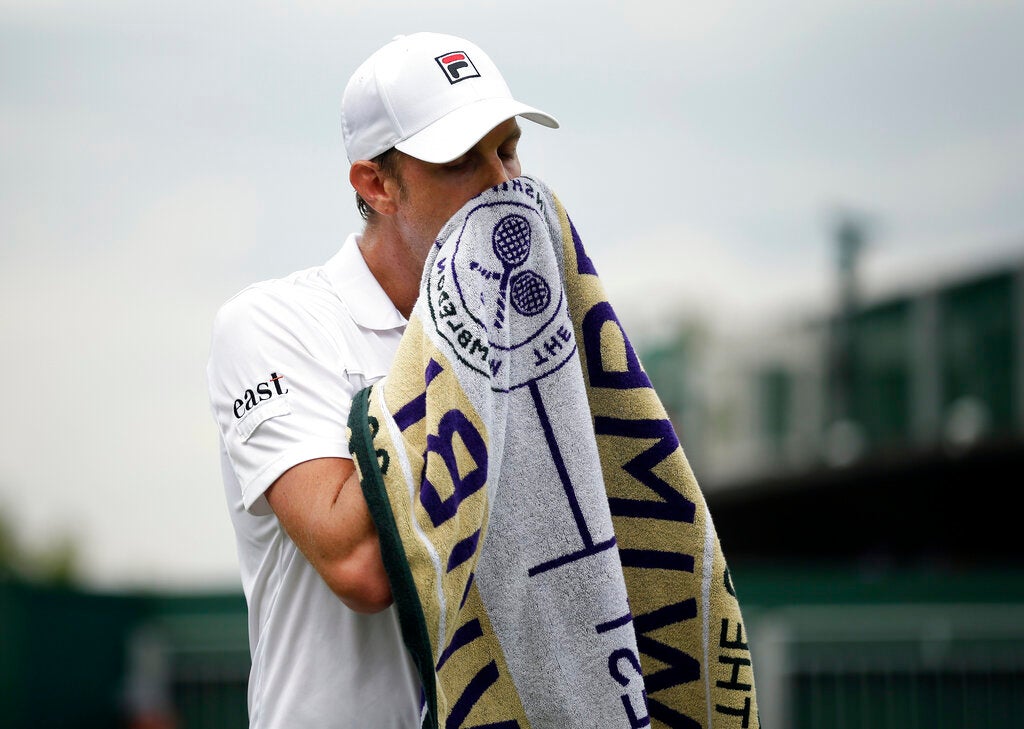 WIMBLEDON, England — Sam Querrey is in the Wimbledon quarterfinals for the third time in four years. His reward as he seeks to reach his first Grand Slam final? A matchup against 18-time major champion Rafael Nadal.

“It’s going to just get harder and harder,” the American said. “It’s his least favorite place of the Slams — and he’s ‘finaled’ it five times. And he’s been rolling through guys.”

“I love playing here and I’m getting more comfortable every year. I like playing on the grass,” Querrey said. “It’s becoming more of a thing when I get here: I don’t care so much who I’m playing, because I have just the confidence that I can make a run, regardless of who’s in front of me.”

In 2016, he upset defending champion Novak Djokovic on the way to the quarterfinals.

In 2017, he upset defending champion Andy Murray on the way to the semifinals.

Now comes Nadal, who won Wimbledon twice and was the runner-up three other times in a span of five appearances from 2006-11.

“I’m going to have to serve incredibly well, take my chances when I get them,” Querrey said, “and, you know, hopefully I can have a good day out there.”

Nadal, who is seeded third, carries a 16-match winning streak into Wednesday’s quarterfinal against Querrey. That includes a 12th trophy at the French Open last month.

“When he plays well, he can be very, very dangerous in all surfaces,” Nadal said. “But, of course, in fast surfaces, when he serves with his aggressive game, maybe more.”

Nadal never had a bit of trouble during his 6-2, 6-2, 6-2 victory over Joao Sousa of Portugal on Monday. Djokovic and Roger Federer also breezed through.

On Wednesday, Djokovic meets No. 21 David Goffin of Belgium, Federer plays No. 8 Kei Nishikori of Japan, and No. 23 Roberto Bautista Agut of Spain faces No. 26 Guido Pella of Argentina.

This is the 24th time the Big Three all reached the quarterfinals of a major tournament; one of them ended up with the title on 20 of the previous occasions.

“It’s pretty incredible, their dominance. They don’t seem to take a Slam off, rarely a Masters Series off,” Querrey said. “They’re engaged and focused — match-in, match-out — for 15 years.”

The best Grand Slam tournament of Alison Riske’s career is happening as her wedding date approaches. So after upsetting No. 1 Ash Barty in three sets Monday to reach Wimbledon’s quarterfinals, Riske joked: “I wish I could get married more often.”

No word on how her husband-to-be, Stephen Amritraj, feels about that sentiment.

“Maybe we’ll have to renew our vows, because it’s worked out well having that on the horizon,” said Riske, a 29-year-old from Pittsburgh. “I’m looking forward to it so much.”

The 55th-ranked Riske will take on 23-time major champion Serena Williams on Tuesday.

And what about all the planning involved in having a wedding?

“Everything is pretty much already in stone. I’m not really stressed about it. I haven’t been stressed about it, really, from the beginning,” Riske said with a laugh, “probably because my fiancé has been doing all the work.”

Since every celebrity couple needs a nickname, there’s been some discussion about what the all-star mixed doubles pair of Serena Williams and Andy Murray should be called.

He tweeted a suggestion of “SerAndy,” which combines the first syllable of her name with his name — and also is a play off the fact that he’s known as Sir Andy, on account of his knighthood.

Williams responded on Twitter by offering up the alternative of “MurRena,” using the first syllable of his last name and last syllable of her first name.

She then repeated her preference for that one when speaking to reporters Monday.

Williams is scheduled for double duty at Centre Court on Tuesday: She plays her singles quarterfinal to open the day’s program there, then returns with Murray for their second-round doubles match.