Keith Thurman has appetite for destruction of ‘legend’ Manny Pacquiao 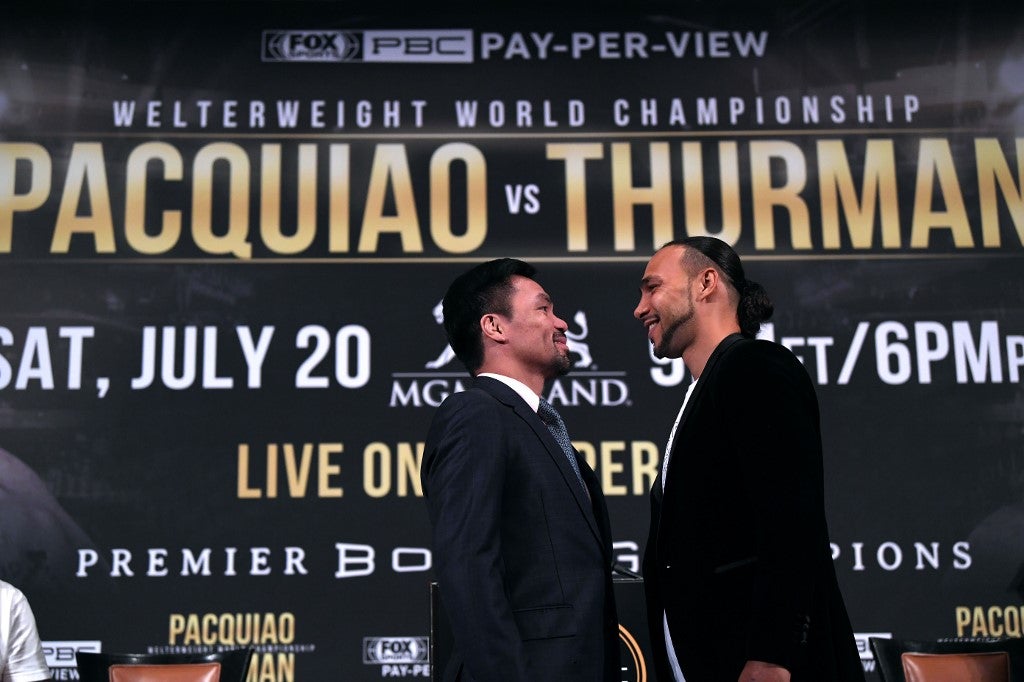 Manny Pacquiao faces off with Keith Thurman during a press conference before their WBA Welterweight Championship fight at The Beverly Hills Hotel on May 22, 2019 in Beverly Hills, California. Harry How/Getty Images/AFP

Keith Thurman warned Tuesday he is targeting the destruction of Filipino boxing icon Manny Pacquiao when the two welterweights face off in Las Vegas later this month.

The undefeated Thurman puts his World Boxing Association welterweight crown on the line against the 40-year-old Pacquiao on July 20 at the MGM Grand.

Thurman, 30, has relentlessly fanned the flames for the contest by stating he plans to send Pacquiao into retirement.

On Tuesday, Thurman took a more respectful tone against Pacquaio, the eight-division world champion who remains one of boxing’s biggest draws as he prepares for the 71st fight of a two-decade professional career.

Thurman said he plans to take an aggressive approach into the fight as he chases an emphatic victory.

“This is a once in a lifetime opportunity to destroy a legend and create my own legacy,” Thurman said on a conference call.

“How can I not Babe Ruth it and step up to the plate, point and start swinging. How can I not go for it? I’ve got an ‘0’ and I’m not afraid to let it go.

“It is what it is. But when Keith Thurman steps into the ring, you’re dealing with Keith Thurman. And he’s a bad man.”

Thurman sees the fight as his chance to claim victory over one of the greats of boxing in Pacquiao (61-7 with two drawn and 39 knockouts).

“This is Manny Pacquiao. It’s a tremendous feeling and it’s going to feel even greater when my hand is raised at the end of the night.”

Thurman (29-0, 22 KOs), who last fought in January when he was made to work hard for a majority decision win over Josesito Lopez, said Pacquiao’s victory over Adrien Broner, also in January, had inspired him.

“He wants to prove his greatness. He’s still reaching for greatness at the age of 40 and it’s admirable,” Thurman said.

“I was impressed by his performance against Adrien Broner. It was inspiring. After watching him, I got out into the streets and ran at one in the morning. Because I just watched a 40-year-old man beat a much younger man. Manny has done so much, but he wants to do more,” Thurman said.