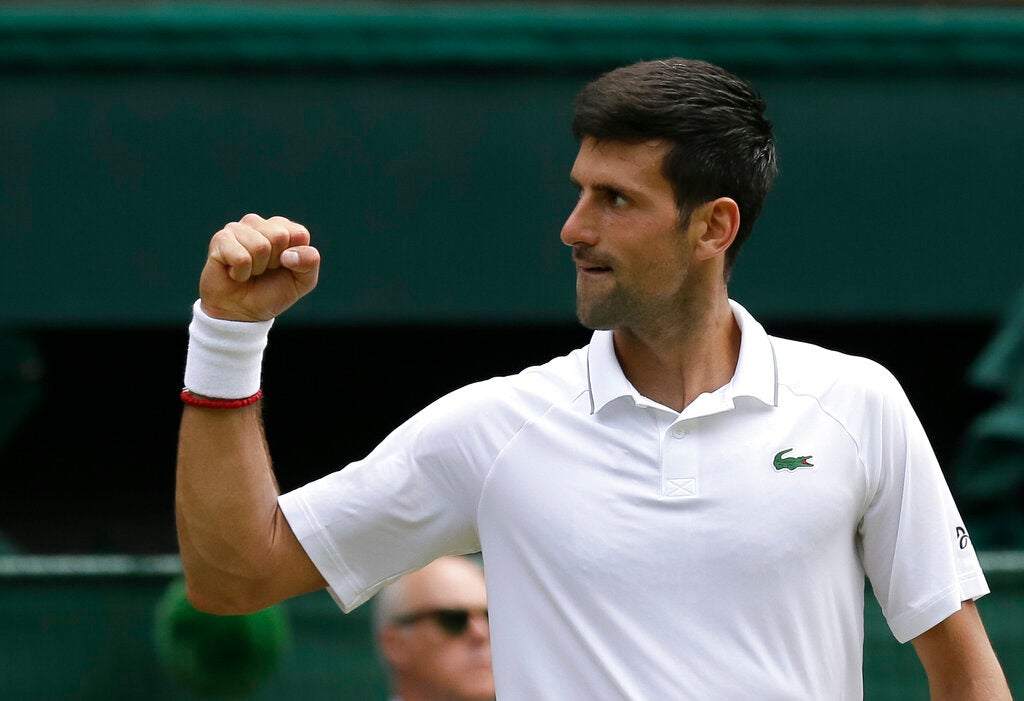 WIMBLEDON, England— Novak Djokovic only has to look back a few months to remind himself that he shouldn’t underestimate his next opponent at Wimbledon.

The top-ranked Serb will be facing Roberto Bautista Agut, a player who beat him in both of their meetings in 2019 — on hard courts in Doha and Miami.

So while the match is pitting a four-time Wimbledon champion with 15 major titles against a player in his first Grand Slam semifinal, recent history suggests that things might not be quite so one-sided.

“He has won twice against me so far this year. That’s certainly going to give him confidence coming into the match,” Djokovic said.

Ahead of the quarterfinals, Bautista Agut was — somewhat surprisingly — the only player who hadn’t dropped a set this tournament. That streak ended against Guido Pella, but the 23rd-seeded Spaniard still won 7-5, 6-4, 3-6, 6-3. Djokovic had an easier time against David Goffin after erasing an early break, winning 6-4, 6-0, 6-2.

Djokovic is known for his ability to extend rallies and keep the ball in play with his defensive ability, and Bautista Agut said that’s a style of play that suits him well.

On the grass at Wimbledon, though, there might not be so many of those rallies. But Djokovic thinks Bautista Agut could be even more dangerous on the quicker surface.

“The ball bounces lower on the grass, which is I think more suitable to his style of the game. He doesn’t like when the ball bounces higher to his backhand,” Djokovic said. “Obviously playing on grass, it’s different. Semifinals of Grand Slam, (I’m) going to try to use my experience in being in these kind of matches.”

With Roger Federer and Rafael Nadal set to square off in the other semifinal, Bautista Agut is the odd man out in a final four that includes the sport’s ever present Big Three. In fact, it seems not even he had expected to make it this far.

The Spaniard had scheduled his bachelor party for this week instead.

“I had planned to be in Ibiza right now. We had everything organized already. My friends, six of them, are all there,” Bautista Agut said. “Well, it feels better to be here in London.”

Playing mixed doubles at Wimbledon, Serena Williams and Andy Murray seemed to be having fun out there on court.

They definitely had time for some laughs in their post-match news conferences — even after losing in the third round.

Williams said she enjoyed appearing in front of the media alongside the two-time men’s champion at the All England Club because much of the focus was on Murray and his chances of returning to singles.

“Andy gets asked every question about his body and the U.S. Open. Literally every question in a different way, but it’s the same question,” Williams said after losing to top-seeded Bruno Soares and Nicole Melichar 6-3, 4-6, 6-2. “It’s great for me because I get to sit here and just look.”

Then, as if she were one of the reporters, Williams started a mini-exchange with her doubles partner.

“How is your body?” she asked.

“Feels good, thanks,” came the reply.

“Are you going to be able to play New York?” Williams asked, trying to suppress her laughter.

“I don’t know,” Murray answered, mimicking previous replies he’d given this week. “I need to train, get stronger. We’ll see. I’m not sure.”

Murray missed last year’s Wimbledon tournament with a hip injury. Since hip replacement surgery this year, he has been playing only doubles.

On Tuesday, after reaching the third round in mixed doubles, Murray was asked repeatedly if he would be able to get back to singles, possibly in time for the U.S. Open. He wasn’t able to give a definitive answer, but while he was trying to satisfy the questioners, Williams looked on laughing to herself.

After missing the French Open with an injury, a run to the Wimbledon quarterfinals has given Sam Querrey high hopes for the rest of the season.

Querrey pushed Rafael Nadal hard in the opening set on Wednesday before losing 7-5, 6-2, 6-2 to the third-seeded Spaniard, and said his recent performances on grass has given him a “boost” heading into the American hard-court season. Querrey also reached the final at the Eastbourne grass-court warmup.

“To have three months off, come back, make a final and a quarterfinal, I feel confident,” Querrey said. “Hopefully this will carry over to the summer.”

Querrey has beaten both Novak Djokovic and Andy Murray at Wimbledon in the past and made the semifinals in 2017. But he has fallen to 65th in the rankings, having been as high as No. 11 last year. If he keeps playing like he has been at the All England Club, though, he could soon be knocking on the door to the top 10 again.

“This is a good stepping stone for that,” he said. “Hopefully I can win a handful of matches (in the U.S.) and keep my ranking going in the right direction.”