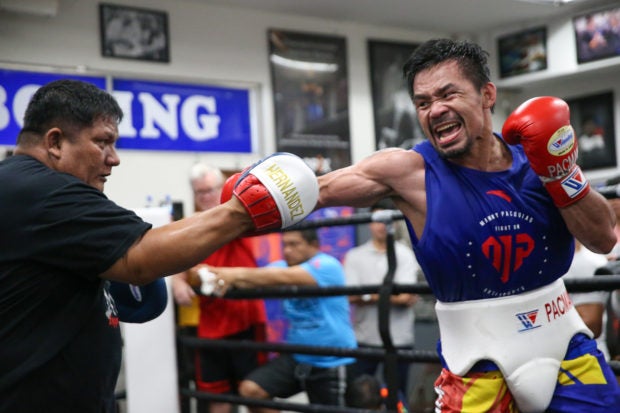 HOLLYWOOD—Keith Thurman sees clearly the short cut to the Hall of Fame: Be the man to finally end Manny Pacquiao’s fighting career.

“What a better way to go into Hall of Fame than being the last man to fight Manny Pacquiao—the last man to ever put him down,” Thurman said on Friday from his own training camp in Florida.

The statement highlights the stark difference between the two camps preparing for the WBA welterweight championship bout in Las Vegas on July 20 (July 21 in Manila).

Thurman continues to spew the trash-talking, a necessity in a fight game that relies heavy on pay-per-view buys while Pacquiao keeps runs a cheery, good-vibes-only camp.

One that went on a break on Friday.

A day after a rigorous workout that involved eight rounds of sparring against two opponents, the 40-year-old Pacquiao decided to take a day off.

He still jogged at Griffith Park. But the scheduled workout at Wild Card was scrubbed off the day’s schedule.

His corner, including trainers Freddie Roach and Buboy Fernandez and conditioning coach Justin Fortune, was already at Wild Card gym when word from his Plymouth Blvd. residence on the cancellation reached Vine St. here.

“No training today, you guys can all go home,” Fernandez said.

“I don’t think it will end early. Both are tough guys and usually are in long distance fights so I think Manny’s gonna knock him out about the ninth round,” Roach said. “I think Thurman can’t handle Manny’s speed and Manny’s speed is continuous, it doesn’t go away halfway through the fight.”