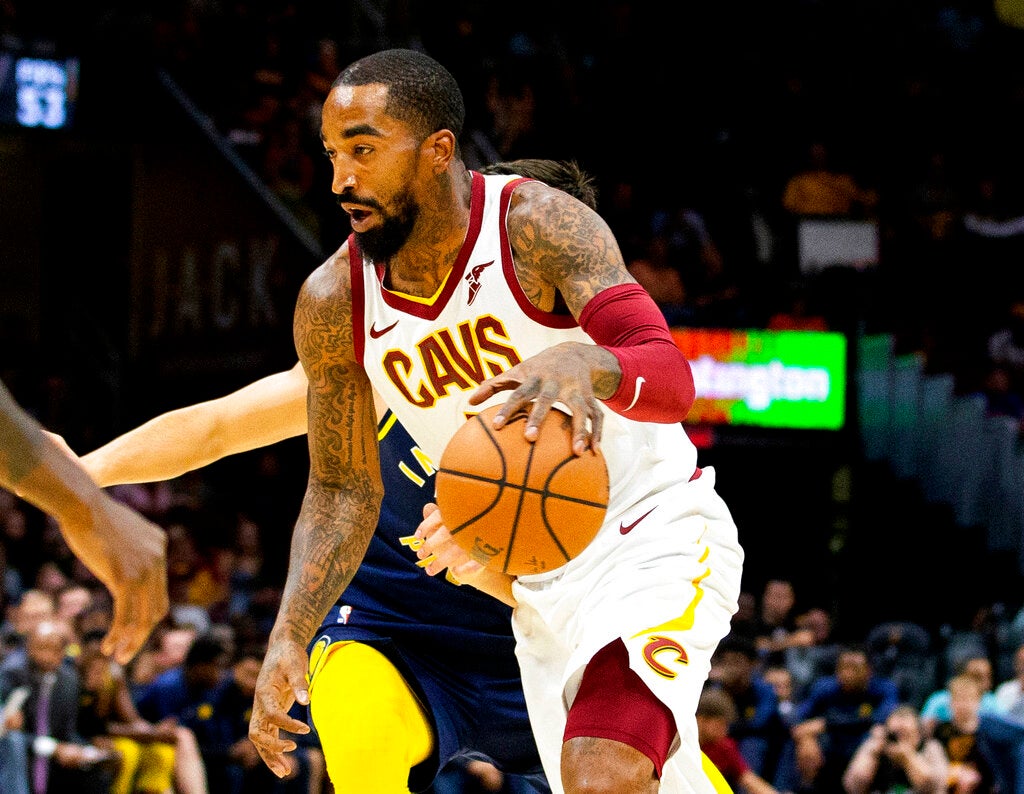 FILE – In this Oct. 8, 2018, file photo, Cleveland Cavaliers guard J.R. Smith dribbles to the basket during the first quarter of a preseason NBA basketball game against the Indiana Pacers in Cleveland. The Cavaliers waived Smith, ending his eventful tenure with the team. Cleveland tried to trade Smith, but could not find the right package and released him to cut space under the salary cap and avoid paying any luxury taxes. (AP Photo/Scott R. Galvin, File)

CLEVELAND — J.R. Smith’s never-a-dull-moment run with the Cavaliers is over.

Cleveland released the colorful shooting guard Monday before his $15.6 million contract for next season became guaranteed. The Cavs had been trying to trade Smith for months, but the team was unable to find the right deal even after he agreed to extend his guarantee date from June 30 to July 15.

By waiving Smith, the Cavaliers will open salary-cap space and will move under the luxury tax threshold for next season.

The 33-year-old played in just 11 games last season after he stepped away from the team in hopes of being traded or released. It was a mutual decision because he wasn’t happy with his role and the Cavaliers didn’t want him to be a negative influence on their young players.

Once he clears waivers, Smith will be a free agent and can sign anywhere. Last week, Smith said he wasn’t finished playing and smiled when asked if it’s been strange not being part of a team for the past eight months.

“Technically my whole career’s been in limbo, so this is easy for me,” he said before playing in the All-Star Celebrity Softball Game.

Smith’s release ends an interesting tenure with the Cavaliers, who acquired him in a trade from the New York Knicks in 2015.

He was both loved and loathed by Cleveland fans, who were never quite sure what he might do on or off the floor.

One of the NBA’s most accurate 3-point shooters, Smith played a vital part in Cleveland winning the 2016 championship, ending a 52-year title drought for the city’s three major sports teams. Smith made two 3-pointers during a critical stretch of Game 7 of the Finals, helping the Cavaliers complete a historic comeback from a 3-1 series deficit to dethrone the Golden State Warriors.

A few days after the team’s victory, Smith further endeared himself to Cleveland fans by going shirtless and exposing his numerous tattoos while riding in the Cavs’ celebratory parade through downtown.

Smith will also be remembered for a gaffe in Game 1 of the 2018 Finals.

In the closing seconds, he grabbed an offensive rebound after a missed foul shot and dribbled out the clock to end regulation, thinking the Cavs were ahead. The game was tied, and Cleveland lost in overtime on the way to being swept in four straight games by the Warriors.

Smith knows some fans won’t forgive him, but there are others who appreciate his quirkiness.

Cleveland will always be special.

“That’s one of the more stress relievers is being able to feel wanted, even if it’s not by the organization, it’s the city,” he said. “That’s bigger to me than anything. The people who spent their hard-earned money to come cheer for you, root for you.”

A father of four daughters, Smith said he hopes to be picked up by another team. But if not, he has no regrets.

“I live a good life,” Smith said. “There’s no reason for me to be stressed or be dissatisfied. I’ve got four amazing kids. I went through one of the toughest parts of my life with my (premature) daughter. This is easy. This is a cakewalk. Just stay in shape and stay ready to play basketball when I’m called. If I’m not called, I still get to be home with my family.”