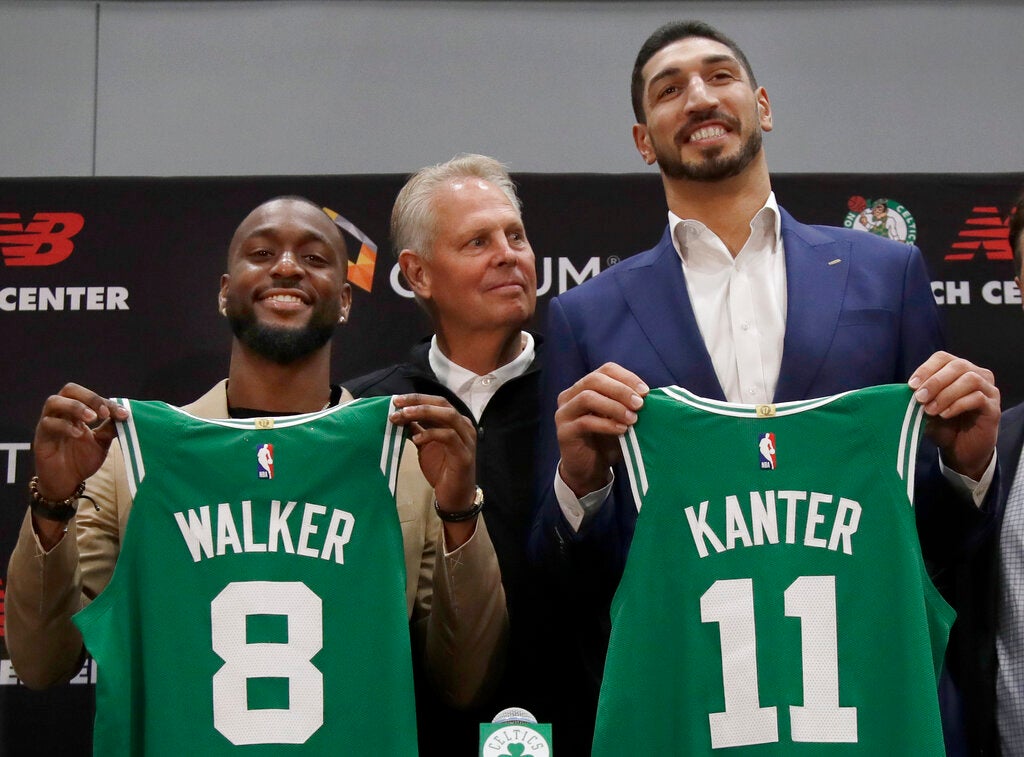 BOSTON — Enes Kanter took a playful swipe at him.

Kemba Walker will try to replace him.

Kyrie Irving is no longer with the Celtics, but his brief flameout in Boston is still on the minds of fans in the city and even, apparently, players who have yet to play a minute for the team.

On the day that the Celtics introduced Walker as their point guard of the future, Kanter said he chose the No. 11 last worn in Boston by Irving in part because it was his number in Oklahoma City in 2016-17. But he also quoted a commercial in which Irving aspired to have the number retired in his honor.

“I want to be the reason no one else wears it,” Kanter said, cracking up himself and the media at the introductory news conference he shared with Walker. “I had to say it.”

Irving was the Celtics’ big free agency splash two summers ago, when he asked the Cleveland Cavaliers to trade him and they shipped him to Boston for the immensely popular Isaiah Thomas. The Celtics, who had just lost to Cleveland in the conference finals, returned to the East finals the next year — when Irving was injured — but bowed out in the second round this season, when he was healthy.

“The last point guard, it didn’t end like we wanted this year, but it certainly wasn’t his fault,” Ainge said.

Irving, who had spoken about his desire to finish his career in Boston — and have his number retired — opted out of his contract and signed with the Brooklyn Nets. Fans were mostly glad to see him go, and Walker played along on Wednesday, joking with a reporter about the Earth being flat — a reference to another famous Irving comment.

Al Horford also jumped ship, meaning the Celtics had lost their biggest acquisition from two of the last three offseasons.

Instead of adding role players to make another run at an 18th NBA title, they needed replacements for their stars. But coach Brad Stevens said he never spent any time worrying about whether the roster was in need of a multi-season rebuild.

“We always go through every scenario,” he said. “But nobody was looking at what we weren’t going to be. We don’t ever look at it that way.”

That’s when Ainge went to work.

Walker was signed to a four-year, $141 million deal — the most Boston could offer, but $80 million less than the Charlotte Hornets could have paid him over five seasons. (The Celtics also announced on Wednesday that they have re-signed forward Daniel Theis and guard Brad Wanamaker.)

“This was our Plan A,” Ainge said, sitting between Walker and Kanter for the news conference at the team’s practice facility. “Getting Kemba was a top priority in free agency.”

Walker won the NCAA championship at UConn, beating Stevens’ Butler team in the 2011 title game. He referred to the championship banners hanging from the ceiling at the Auerbach Center, and the new Boston Garden, and said he hoped to have a chance to win again after reaching the playoffs just twice, losing in the first round both times, in eight seasons with the Hornets.

“Charlotte is all I’ve known,” he said. “It all came down to my happiness and how I want to compete night in and night out. My time was up there. I’m ready to start a new chapter.”

Ainge wasted no time — even before Walker agreed to a deal — putting him to work. The GM handed Walker his phone so he could help recruit Kanter.

“That made me very excited,” Kanter said. “An All-Star guy, a superstar, calling me and saying he wants me to be here. That made me feel very special. I called my manager and said that seems like a good place to be.”