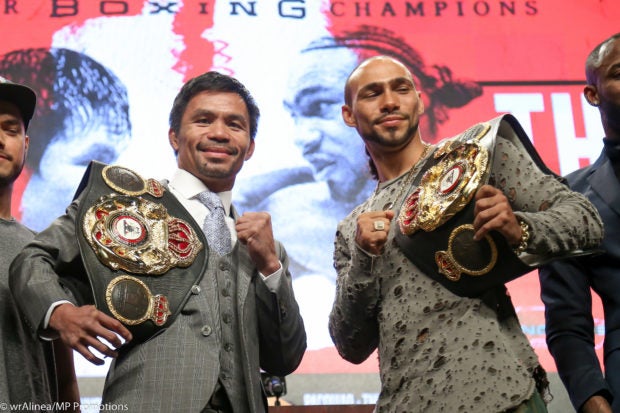 Thurman, the undefeated welterweight champion, has been talking trash since his welterweight showdown with Manny Pacquiao was announced several months ago and now he’s putting his money where his mouth is.

“At the end of the day, it’s a sport. I’m a winner in life, but to bet on myself for the opening rounds makes me do what I said earlier which is ‘swing swing swing.’ You gotta swing to hit a home run. You can’t just sit there and pump fake all day. I just wanna encourage myself.”

The 30-year-old Thurman, who hails from Clearwater, Florida,  said going all-in on himself pushes him more to keep his promise of closing the curtains on the Filipino legend’s career.

That and, of course, it’s always nice to take home more dollars apart from his paycheck.

READ: Thurman looking forward to Pacquiao fight: I get to punch a senator with T-rex arms

“In boxing, we don’t really have a knockout bonus so if ‘One-Time’ Thurman gets a first round knockout somebody’s gotta pay me so at least the MGM Grand can pay me. It’s fun, it’s playful and it’s a little bit part of my strategy. I don’t recommend it for every fighter at home, but I like it.”

It’s not an official bet yet but Thurman, who is now the slight underdog against Pacquiao after opening as the favorite, said it would be by Friday on the eve of fight night.

“We’re waiting. We believe that the odds are gonna keep being not in our favor which is gonna allow me to maximize my bet,” he said.

READ: Once inspired by Manny Pacquiao, Keith Thurman turning out to be an admirer

“I went to the bank today. We got the money ready, but we haven’t gotten the ticket yet because you know they’re still gonna shift. It’s not Friday night. All the fans aren’t here at the MGM yet. The Asians have been getting it in,” he added.

Money down or not, Thurman is eager to cash in.

“I’m an undefeated champion for a reason. I’ve been presented with many challenges in the ring and I’ve always overcome these challenges. I’m ready for anything that Manny Pacquiao is going to throw at me.”