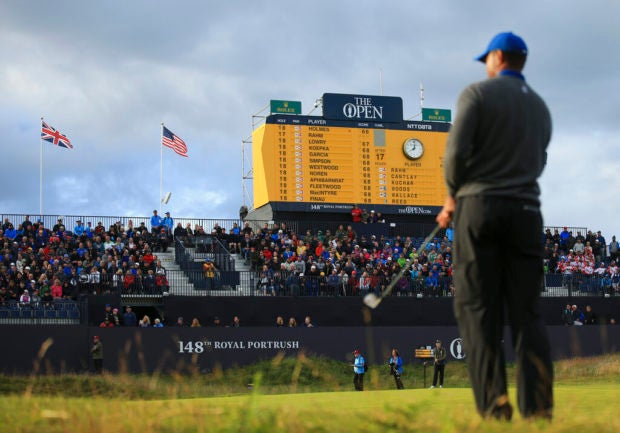 Tiger Woods of the United States prepares to chip onto the 18th green, as the scoreboard shows the leading players and Woods score been at bottom left, during the first round of the British Open Golf Championships at Royal Portrush in Northern Ireland, Thursday, July 18, 2019.(AP Photo/Jon Super)

Woods, Rory McIlroy and others who got off to a rugged start faced a daunting task trying to make the cut on a links course with ever-changing conditions and a steady challenge.

Woods didn’t make a birdie until the 15th hole in his opening round of 78, his worst start in a British Open and third-highest score in a major championship.
McIlroy played reasonably well except the start (quadruple bogey) and finish (triple bogey) in his round of 79.

J.B. Holmes set the pace with a 5-under 66 and played Friday morning under a mostly blue sky and mild wind. That could change without notice.