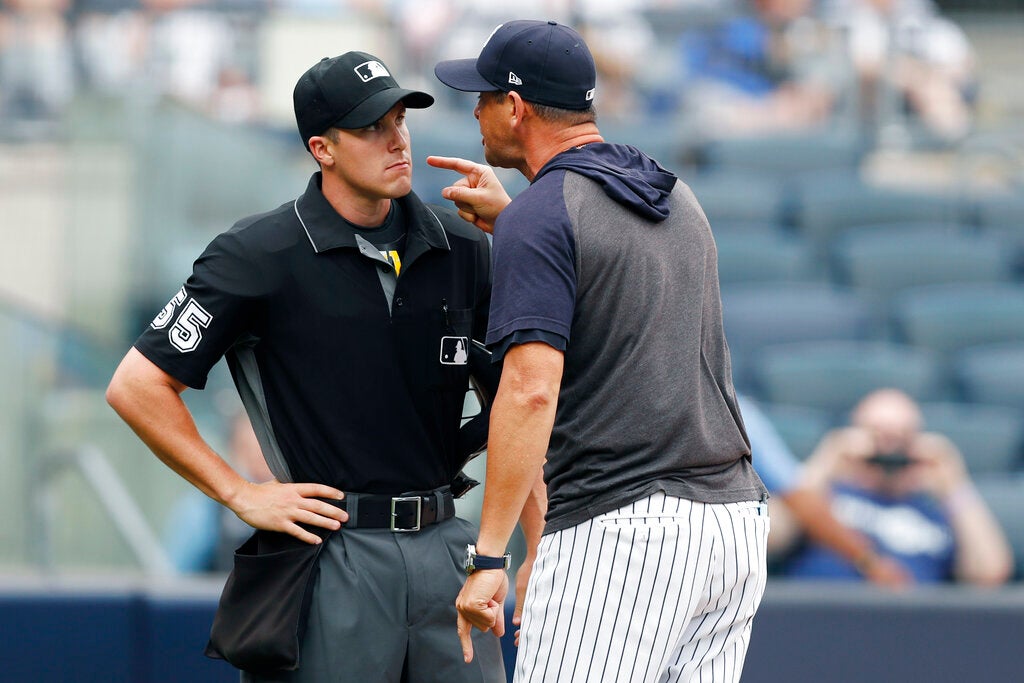 NEW YORK — Yankees manager Aaron Boone got fired up at a rookie umpire in a profane rant, and New York awoke from a sleepy start to rally past the Tampa Bay Rays 6-2 in a doubleheader opener Thursday.

New York rallied to win the second game 5-1 and reopen an eight-game AL East lead over the second-place Rays. Luke Voit tied the score in the fifth with his first home run since June 14, and catcher Mike Zunino caused Charlie Morton to balk home the tiebreaking run in a four-run sixth that included Didi Gregorius’ two-run single. The Yankees won three straight after wasting a ninth-inning lead in the series opener and improved to 34-11 against the AL East, including 12-5 against Tampa Bay.

After Domingo Germán (12-2) gave up solo homers to his first two batters in the first game, Gio Urshela hit a tying home run in the second off Yonny Chirinos (9-5), and Gary Sánchez smashed a go-ahead 110 mph single off the glove of third baseman Yandy Díaz during a three-run fifth. Díaz had helped the Yankees come alive when he dropped Didi Gregorius’ leadoff popup in the second for a two-base error.

Boone fumed after rookie umpire Brennan Miller called Brett Gardner out on strikes in the second inning. Miller, umpiring behind the plate for the fifth time in the major leagues, had punched out Aaron Judge in the first. Gardner batted in the second after Urshela’s tying, two-run homer and struck out on a 1-2 pitch.

Gardner returned to the dugout, slammed his bat into the bat rack nine times, then eight times into the dugout roof. Microphones caught Boone yelling that the pitch was outside to Miller, a Triple-A International League crew chief who made his big league debut April 20 as a call-up umpire.

Miller said, “I heard you, Aaron,” and when Boone persisted, the umpire ejected him. Boone ran out and kept up the argument, getting close to Miller’s face and clapping his hands for emphasis. He repeatedly called his players “savages” in the batter’s box and told Miller to “tighten it up right now, OK?”

PHILADELPHIA — Bryce Harper tied it in his Phillie Phanatic headband with an RBI single and Rhys Hoskins ripped a two-RBI single in the seventh inning to rally Philadelphia over Los Angeles.

Hoskins ripped one to right off Joe Kelly to cap a four-run seventh for the Phillies and a 7-5 lead.

Phillies closer Hector Neris, pitching while appealing a three-game suspension, gave up a solo homer to Alex Verdugo in the ninth to make it 7-6. But he got the final out for his 18th save. He upset the Dodgers by yelling into their dugout after getting the final out.

Ranger Suarez (2-0) pitched 1 1/3 scoreless innings in relief to help the Phillies split the four-game series with the Dodgers. Dylan Floro (4-3) took the loss in relief.

CLEVELAND  — Trevor Bauer struck out 10 in 6 2/3 innings, José Ramírez hit a go-ahead home run in the sixth and Cleveland beat Detroit for the 11th straight time.

Cleveland swept the four-game series and moved to 12-1 against Detroit this season. The Indians have won five straight and 11 of 13 overall.

Bauer (9-7) has been the subject of trade rumors as the July 31 deadline approaches. Several scouts were seated behind home plate to watch Bauer, who could be one of the big names dealt by end of the month.

Brad Hand recorded the final four outs — all on strikeouts — for his 26th save in 27 chances. Tigers starter Matthew Boyd (6-8), another trade candidate, gave up the home run to Ramírez that broke a 3-all tie.

BOSTON — Chris Sale and two relievers combined on a two-hitter, and the Boston left-hander struck out 12 in six innings for his first regular season win at Fenway Park in more than a year.

Rafael Devers hit a three-run homer off Thomas Pannone (2-4), who matched Sale into the fifth inning before giving up Sam Travis’ double and Sandy León’s RBI single. After Mookie Betts walked, Devers hit the first pitch out to right-center to make it 4-0 and chase Pannone.

The slam came one pitch after the Reds just missed what would have been an inning-ending double play. Reliever Robert Stephenson (2-2) retired pinch-hitter Yairo Munoz on a bases-loaded fly to right fielder Yasiel Puig, and Puig’s throw home kept Matt Wieters at third. Catcher Juan Graterol’s throw to first almost caught Kolten Wong off the bag, but Wong got his hand to the base a split-second before Joey Votto’s tag.

Eugenio Suarez hit a solo home run in the first inning and added a sacrifice fly in Cincinnati’s two-run third as the Reds built a 3-0 lead.

ATLANTA — Stephen Strasburg had a three-run homer among his three hits and set a franchise-record for a pitcher with five RBIs to help surging Washington beat Atlanta.

The Nationals, who have won 14 of their last 18 games, cut Atlanta’s lead to 5 1/2 games in the NL East by winning the opener of a four-game series.

Strasburg (12-4) improved to 3-0 against Atlanta this season by winning his fifth straight start. He lasted only 5 1/3 innings, allowing eight hits and three runs. His effort on the mound was overshadowed by his career highs in hits and RBIs.

After the Nationals knocked rookie right-hander Kyle Wright (0-3) out of the game in the third, Strasburg hit Touki Toussaint’s second pitch 420 feet over the Washington bullpen behind the left-field wall for a three-run homer and an 8-1 lead.

Rosario produced the first pinch-hit homer of the year for the Twins and helped snap their season-high three-game losing streak. Mitch Garver and C.J. Cron each went deep in the eighth to pad the lead, and Taylor Rogers held the A’s down for two innings to record his 14th save in 17 tries.

Springer drove four home runs during the four-game series, tying Craig Biggio for the most when batting leadoff in a series in franchise history. Biggio had his four connections during a three-game set against the Cubs in 1998.

The Angels didn’t get much of a lift from the return of Mike Trout, who missed three games with a strained right calf. Trout was the designated hitter and went 1 for 4.

Springer’s solo shot to right-center off Matt Harvey (3-5) in the third inning was his 22nd of the season, matching his total from last year. Bregman’s homer to lead off the sixth gave Houston a 6-0 lead.

PHOENIX— Orlando Arcia hit a tiebreaking single in the eighth inning to decide a duel between Milwaukee’s Zach Davies (8-2) and Arizona’s Merrill Kelly.

Arizona hitters only struck out once, when Matt Albers got Nick Ahmed looking for the game’s final out. It’s the first time a major league team has had one strikeout in a game since April and came a night after the Diamondbacks tied a franchise record for a nine-inning game with 19 runs against the Texas Rangers.

Davies got a lift with Lorenzo Cain robbed Eduardo Escobar of a home run in the first inning. He pitched one-run ball over seven innings, same as Kelly.

The Brewers scored three runs off Yoan Lopez (1-3) in the eighth.

MIAMI — Brian Anderson doubled home the winning run with one out in the ninth inning and Miami earned its first walkoff victory of the year.

The score was 3-all when Garrett Cooper singled in the ninth against Trey Wingenter (1-3). Pinch runner Yadiel Rivera stole second and scored without a play on Anderson’s hit into the left field corner.

The Marlins were 1 for 13 with runners in scoring position before Anderson came through. Five Marlins pitchers combined for 15 strikeouts. Sergio Romo (2-0) had two strikeouts in a perfect ninth.

Ian Kennedy gave up a run in the ninth but struck out A.J. Reed looking with the tying run on second base to clinch the win and earn his 16th save in 19 opportunities. Brad Keller (6-9) recovered from a rocky start to get the win.

The White Sox have lost seven in a row since coming back from the All-Star break and drop a season-worst nine games under .500. Yoan Moncada matched his career high, set last year, with his 17th home run in the top of the third to make it 3-0 before the Royals scored. Ross Detwiler (1-1) took the loss.