Jinkee Pacquiao nervous as Manny faces younger Thurman, but ‘he told me to just relax’ 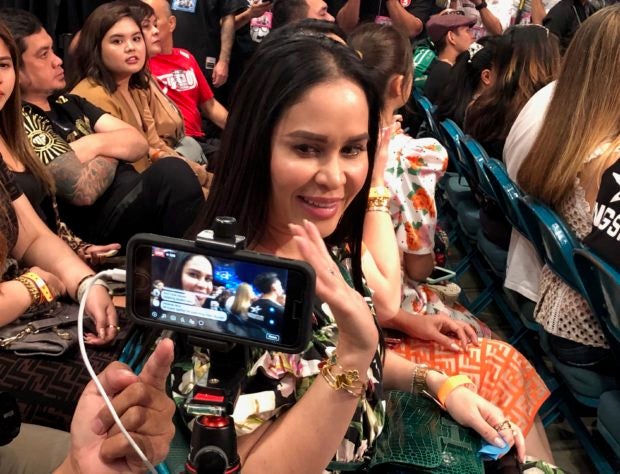 Jinkee Pacquaio during the weigh ins for Pacquiao-Thurman. Photo by Mark Giongco

LAS VEGAS—Manny Pacquiao assured his wife Jinkee that there’s no need to worry when he steps into the ring for his 71st professional fight against undefeated champion Keith Thurman on Saturday.

Oddsmakers have Pacquiao as the favorite to win but the Filipino boxing superstar is expected to be in a gauntlet against the bigger and much younger Thurman.

“Manny told me to just relax,” Jinkee said in Filipino before the official weigh-in on Friday. “I’m nervous because there’s a big age difference.”

Jinkee has no other predictions than a victory for the eight-division champion. Her other wish is for the fighting senator to be safe and sound after the bout.

“Of course, he will win. I’m just praying that he will be safe after the fight.”

READ: If Jinkee Pacquiao had her way, no more boxing for Manny

Their two sons Jimuel and Michael, however, foresee a resounding victory over Thurman.

Jimuel, the eldest who has aspirations of becoming a world champion boxer as well, sees a late-round stoppage while Michael predicts a TKO win in the middle rounds.