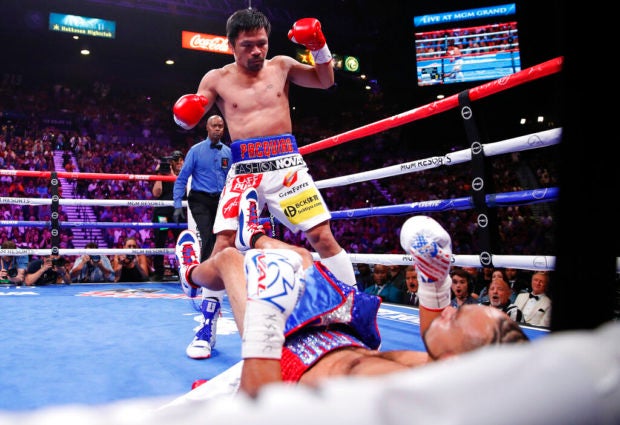 Manny Pacquiao, reacts after knocking down Keith Thurman in the first round during a welterweight title fight Saturday, July 20, 2019, in Las Vegas. (AP Photo/John Locher)

LAS VEGAS—As often as he blitzed foes while hopping through weight classes in his prime, Manny Pacquiao—now 40 and fast gaining on the end of his career—keeps serving up reminders of his greatness.

On Saturday night, he came up with another virtuoso performance, throwing in another snapshot to add to his greatest hits collection, and eked out a split decision victory over Keith Thurman to wrest the WBA welterweight super championship before an adoring crowd at MGM Grand.

“I did my best, he (Thurman) did his best,” Pacquiao said after the bruising, action-packed match that lived up to the hype.

It certainly wasn’t the bell-to-bell performance of the old Pacquiao, the one who crushed foes with a potent mix of speed and power. There was a sense that Pacquiao eased up toward the end of the fight, allowing Thurman to keep the fight close.

But early on, it was vintage Pacquiao.

With the fight still warming up, Pacquiao caught Thurman with a left flush to the chest, and as the American was backing up, he slammed a solid right to the face, sending him to the canvas right in the first round.

That certainly made the difference in a fight judged closely.

Blitzed early, Thurman fought with the same audacity he showed during prefight interviews, “trying to get the judge to my side.”

He began controlling the middle rounds with stinging jabs that stifled Pacquiao’s bouncy, in-and-out movement and brought the fight to the eight-division champ’s doorstep.

“I felt like I was gonna give him a pressing fight even though he knocked me down; I didn’t care about getting in his face,” Thurman said. “I felt like he was getting maybe a little bit tired in the later rounds.”

But of all the weapons Pacquiao has in his arsenal, it was his vast ring experience that kicked in. Boxing’s only eight-division champion worked on Thurman’s body, mostly finding his mark in the 10th, stalling Thurman’s momentum.

“It was slightly in the solar plexus and slight under the ribs,” Thurman said of one of the punches that made him bend over in pain.

“I’m sure the fans are very happy because of the results although it favored me,” said Pacquiao, who sported heavily tinted shades during postmatch presser as he reportedly had an eye irritation. (See related story on Page A2.)

“But you know, I wanna clap my [hand for my] opponent here,” Pacquiao said. “He’s very tough. He’s very young. I can say he’s heavy-handed, man. Not like my other opponents.”

Thurman charged into this showdown saying he would send Pacquiao into retirement, adding he would use a gallant victory here to push his case for greatness.

But on the eve of the fight, Pacquiao warned that he would school Thurman.

The American learned his lesson—and was thankful for it.

“You get blessings and lessons. Tonight was a blessing and a lesson. Thank you, everybody, and thank you, Manny Pacquiao.”

Pacquiao said the first-round knockdown was the turning point of the match, acknowledging that it could have gone either way had he not floored his foe considering their many furious exchanges.

“He reminded me of [Antonio] Margarito,” Pacquiao said, referring to his 2010 opponent for the WBC light middleweight title. He said he suffered from those heavy hits he didn’t bother to defend the title.

Pacquiao’s face was banged up when he showed up at the press conference.

Complaining of pain in his eyes, Pacquiao, according to wife Jinkee, will not be able to attend President Duterte’s State of the Nation Address and will rest upon doctor’s advice.

Pacquiao did not complain of any other injuries.

Some 14,356 spectators showed up, including celebrities like NBA champion Kawhi Leonard and Floyd Mayweather.

Mayweather walked out of the arena even before the decision was read. He was there as one of the promoters of the fight.

But even then, his presence kept the hope of a rematch with Pacquiao before they both head off to the sunset together.

Pacquiao didn’t mention Mayweather in the interviews but clearly indicated that he’s not hanging his gloves just yet.

“You know I can still fight,” he said. “I can give a good fight. I can entertain the fans.”

Pacquiao reportedly earned $10 million from the fight, while Thurman, who readily asked for a rematch, took $2.5 million.