Tim Duncan returning to Spurs as an assistant coach 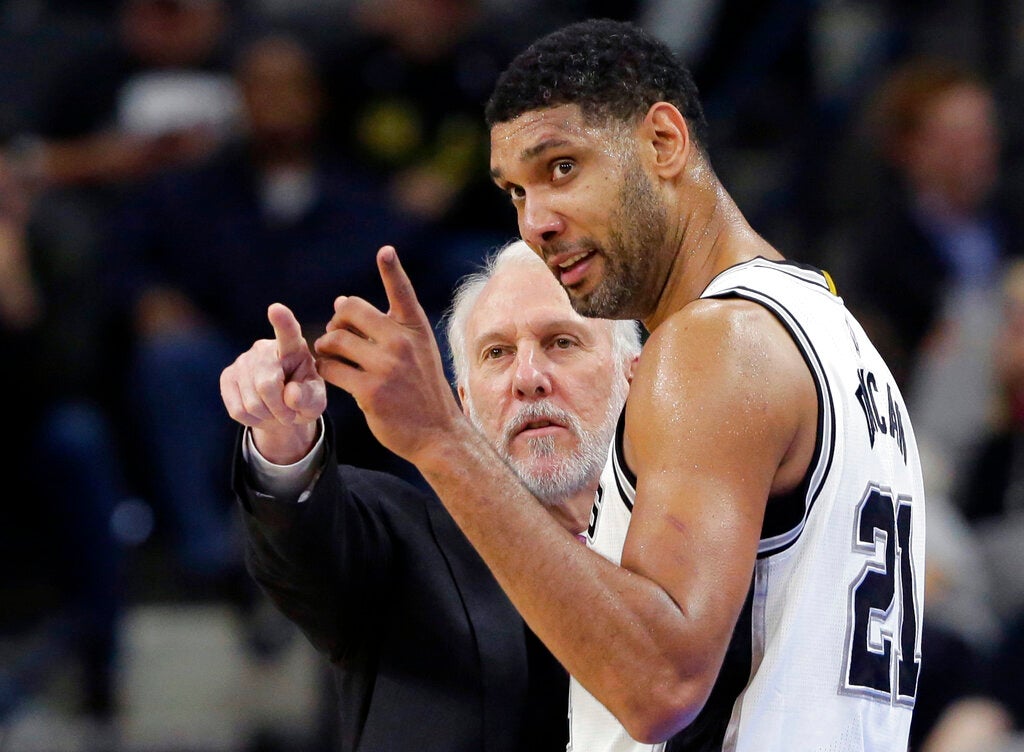 FILE – In this Dec. 2, 2015, file photo, San Antonio Spurs head coach Gregg Popovich, left, talks with forward Tim Duncan (21) during the second half of an NBA basketball game against the Milwaukee Bucks in San Antonio. Duncan is back with the Spurs, this time as an assistant coach. Duncan won five championships in a 19-year career with the Spurs. Popovich, in a release distributed by the team, says “it is only fitting, that after I served loyally for 19 years as Tim Duncan’s assistant, that he returns the favor.” (AP Photo/Eric Gay, File)

Tim Duncan is back with the San Antonio Spurs, this time as an assistant coach under Gregg Popovich.

Duncan, the Spurs’ all-time leader in points, rebounds and blocked shots — and the only player to be on all five of San Antonio’s NBA championship teams — officially returned to the franchise Monday. The Spurs, per their usual style, made the announcement in a very understated way, not even putting Duncan’s name in the headline of the news release.

“It is only fitting, that after I served loyally for 19 years as Tim Duncan’s assistant, that he returns the favor,” Popovich said in the release.

Duncan didn’t even get top billing in the announcement. That went to Will Hardy, who will be taking on an expanded role as one of the Spurs’ assistant coaches. Hardy has been with the Spurs since 2010, working his way up from the video room at first.

“Will Hardy is a talented, young basketball mind who has earned a great deal of respect from everyone in the organization thanks to his knowledge, spirit and personality,” Popovich said.

The entirety of the Spurs’ description of Duncan in the release was this: “Duncan, a 1997 Wake Forest graduate, played 19 seasons with the Spurs before retiring in the summer of 2016.” No mention of his rings, his 15 All-Star nods, his three NBA Finals MVP awards, his two NBA MVP awards or anything else.

Duncan retired from playing three years ago, but has worked at times with San Antonio’s post players. He has long been one of Popovich’s favorites, even going back to 1997 in the days leading up to San Antonio taking Duncan with the No. 1 overall pick in that year’s draft.

Popovich went to the Virgin Islands before that draft to get to know Duncan, and was immediately sold.

“We lived on the beach for a few days and we swam and we talked,” Popovich said at Duncan’s retirement ceremony. “From that moment I knew he was a special individual because he basically talked about everything but basketball. And we’ve been the recipients of that intelligence and that outlook on life since he’s walked in here.”