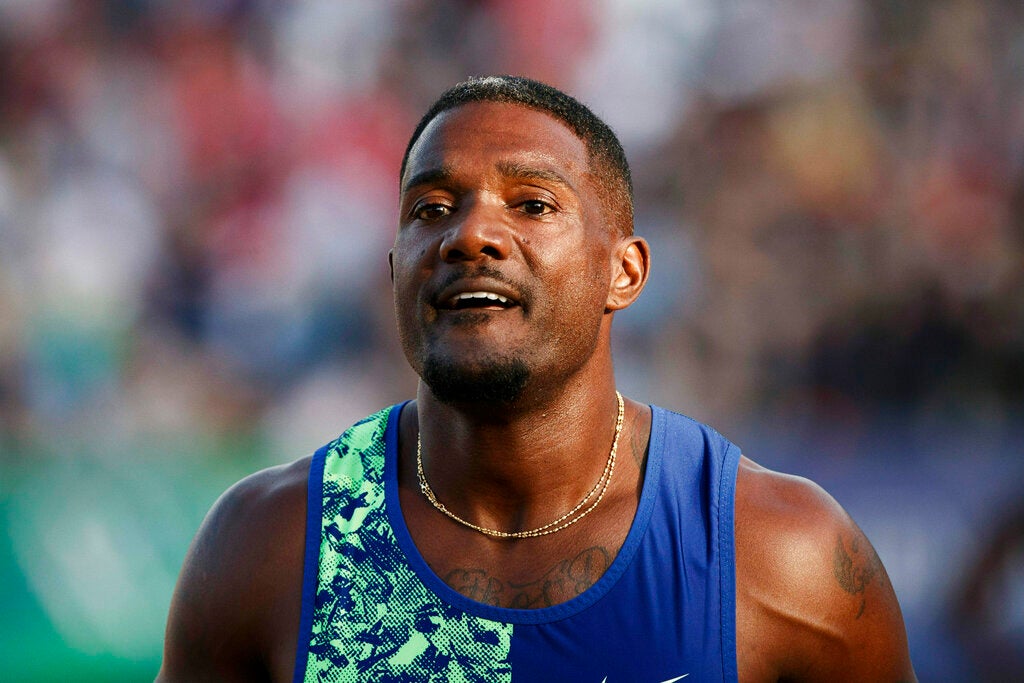 FILE – In this June 11, 2019, file photo, Justin Gatlin competes in the men’s 100 meter final during the Paavo Nurmi Games in Turku, Finland. Reigning world 100-meter champion Justin Gatlin is 37 and still feels like he can keep up with the new kids in the starting block. He does feel old from time to time when he thinks about all the familiar faces who are no longer competing. (Roni Rekomaa/Lehtikuva via AP, File)

DES MOINES, Iowa — Sometimes after a particularly grueling workout, sprinter Justin Gatlin will turn to his younger training partners and inquire: “Are you sore, too?”

It’s just an age check. He doesn’t feel 37 except on rare occasions. Like at big races when he sees so much youth on the starting line and not the familiar faces from years gone by.

Missing, of course, is his biggest rival, Usain Bolt, the Jamaican standout who rewrote the record book before saying goodbye to track nearly two years ago.

Arriving on the scene, a slew of 20-somethings such as Americans Christian Coleman and Noah Lyles who present another challenge for Gatlin, the defending 100-meter world champion.

“I don’t think about age. I don’t think about being old,” said Gatlin, who will compete in the 100 at the U.S. championships this week in Des Moines, Iowa. “I just feel like a time traveler in a way. I’m still here, still running, still putting down good times, still training really well. Just staying focused on what the goal is.”

“These young athletes, they make me feel young,” said Gatlin , who doesn’t consider the Tokyo Olympics next summer his finish line as he contemplates racing through the 2021 world championships in Eugene, Oregon. “They’re running super-fast times that I ran before so it gives me a target. It gives me a sounding board to know where I have to be and how I’m going to have to compete.”

Throughout his career, Gatlin has been a polarizing figure. With his doping past — his four-year suspension ended in 2010 — Gatlin’s been booed (like the night he beat Bolt for gold at the ’17 world championships in London) and hounded (he gestured toward a heckler bothering his mom in the stands during the medal ceremony at the ’15 worlds in Beijing). He’s never let it bother him.

Instead, he lets his performances do most of his talking.

“I’m an enigma,” Gatlin said. “I’ve had my dark times and I’ve gone through an area where normally someone who’s been away from the sport or had a ban would never come back from. … I defied those odds to a point where I think that it made people uncomfortable because not only did I come back, but I came back better.”

He said the younger generation doesn’t judge him. An up-and-coming sprinter once joked with Gatlin that he happened to be in first grade when Gatlin won the 100-meter title at the 2004 Athens Olympics.

“Those kinds of things always shock me, how time really works. But it still doesn’t make me feel old,” said Gatlin, whose best 100 time is 9.74 seconds in Doha on May 15, 2015. “I’ve gained so many more followers just off of the respect of me working hard, me climbing, keep fighting for it no matter my age, no matter how many times I lost to Usain. It was all about staying the course, which was my course, and not veering from and trying to be something that everyone wanted me to be. I just wanted to be Justin.”

Gatlin surprised the track world at worlds in ’17 by beating Bolt in Bolt’s final major 100 race. Gatlin also edged Coleman, who came in second that night with Bolt taking third.

Not having Bolt at the world championships this fall in Doha remains hard to fathom for Gatlin. They’ve had so many epic races over the years, like at worlds in ’15 when Bolt eclipsed Gatlin at the line.

But this thought keeps Gatlin working: The next Bolt is out there. It could be Lyles. Or Coleman. It could be Andre De Grasse of Canada or Matthew Boling, the teen from Texas who is headed to Georgia for college and who became a viral sensation this spring when he ran a wind-aided 9.98 in the 100 (Bolt’s world record is 9.58).

It could be anyone.

“Track and field is a beautiful, beautiful novel with many, many unique chapters,” Gatlin said. “I’m excited about what’s going to come after and how it’s going to be unique and maybe bigger and better than a Usain Bolt.”

At nationals this week, Gatlin’s plan is modest. He will run a round of the 100 — he already has an automatic spot to worlds — and see how he feels. If he feels good, he may chase after the title. If not, he won’t. Gatlin is planning to skip the 200 as he tries to get his hips and hamstrings feeling 100%.

To keep his legs fresh at 37, Gatlin has learned to take rest days. To keep his mind fresh at 37, he works out with younger training partners who bring new energy and ideas.

“That,” Gatlin said, “is really what keeps me young.”