Pacquiao to Mayweather: Want fans to stop asking for rematch? Then fight me again 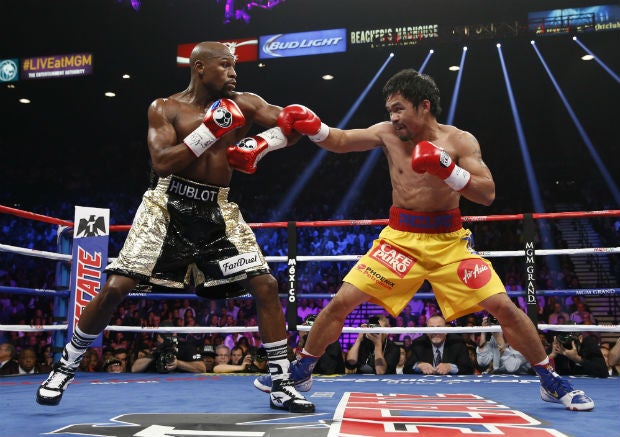 FILE – Manny Pacquiao, right, from the Philippines, trades blows with Floyd Mayweather Jr., during their welterweight title fight on Saturday, May 2, 2015 in Las Vegas. AP

If you want critics to stop talking, then fight me again.

“My comment is, he should come back and fight again,” said Pacquiao in Filipino in an ambush interview at the Senate Wednesday.

READ: Pacquiao hits back at Mayweather: You come to my fights and I’m the one trying to stay relevant?

The Filipino boxing champion, who is also a senator in the Philippines, and Mayweather exchanged verbal jabs Wednesday after the retired American fighter said that Pacquiao built his entire legacy “off its association with my name.”

This after calls for a rematch gained steam again following another victory by Pacquiao, this time against much-younger Keith Thurman in Las Vegas, where Mayweather was again in attendance, last Sunday.

“If he wants fans to stop asking him [about a rematch], then we should fight again,” Pacquiao said. “Because that’s what the fans want.”

READ: Floyd Mayweather: Manny Pacquiao built his legacy off association with my name

Pacquiao, who surprised the trash-talking Thurman with a vintage performance but absorbed solids blows himself, said he’s ready to fight anybody. His team, though, has mentioned fighters like Danny Garcia and Mikey Garcia as possible opponents.

“Me, I can fight anybody, no problem,” said boxing’s only eight-division champion.

Pacquiao said he doesn’t know why Mayweather is calling him out again.

“Fans have been asking me when we’re fighting again. O don’t even answer anymore, because people keep on asking me about him even when he’s not my opponent.”