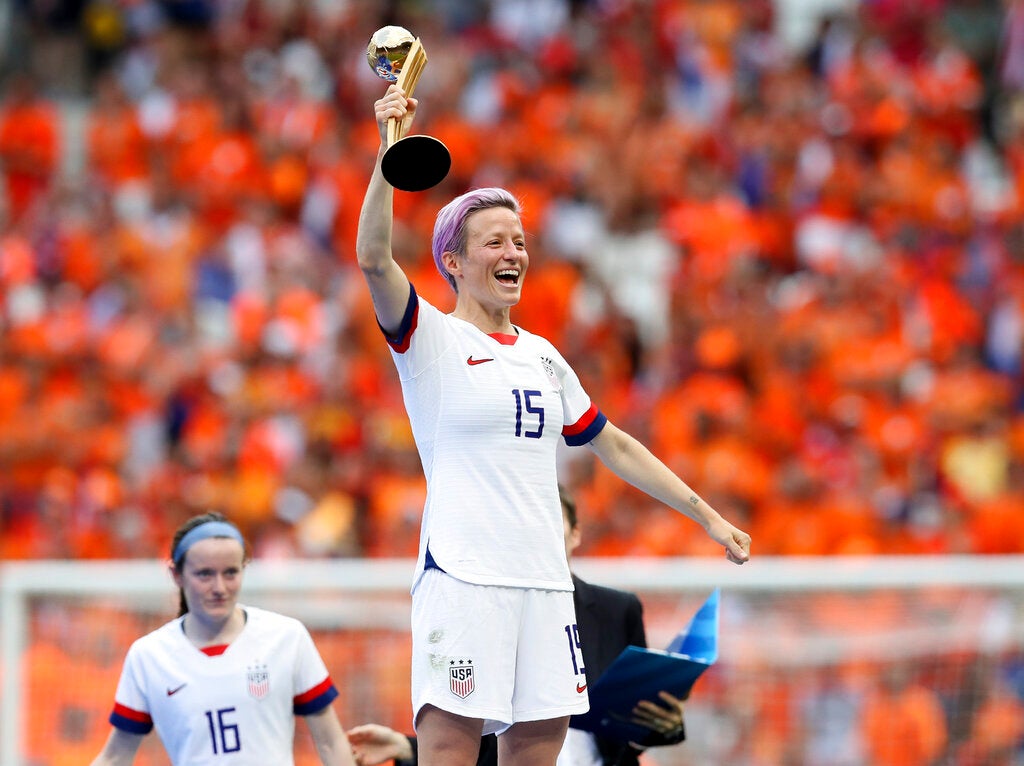 FILE – This July 7, 2019 file photo shows Megan Rapinoe celebrating her team’s victory after the Women’s World Cup final soccer match between U.S. and The Netherlands outside Lyon, France. Penguin Press announced Thursday, July 25, that Rapinoe’s book, currently untitled, will come out in Fall 2020. Penguin is calling the book a “perfect vehicle” for an “honest, thoughtful, unapologetic” take on everything from soccer to nationalism to gay rights. (AP Photo/David Vincent, File)

FIFA wants its ruling council to fast-track expansion of the next Women’s World Cup to 32 teams.

In a document seen by The Associated Press, FIFA asked council members Friday to approve adding eight more teams within days and without a formal meeting. Agreement would include urgently rebooting the ongoing bid contest to host the 2023 tournament.

FIFA believes the 2019 World Cup, won by the United States in France this month, showed a bigger tournament is commercially possible, and would speed development of the women’s game.

“FIFA has a responsibility to ensure that its women’s competitions not only showcase women’s football at the highest level, but also act as a catalyst to grow the game,” council members have been told.

A faster timetable is needed because the 37-member FIFA Council next meets in person from Oct. 23-24 in Shanghai.

FIFA now wants to modify the bid process in August by asking the nine federations to re-confirm interest for a 32-team tournament, and inviting other federations to enter. Bids would be submitted in December and a FIFA-run evaluation of the candidates would be published in April.

If council members agree to the expansion by next week, FIFA suggests they would pick the host next May instead of March as previously scheduled.

It is unclear how the extra eight places would be allocated, with FIFA proposing to consult its continental governing bodies.

“Such proposal would be formally approved by the FIFA Council at a future meeting,” FIFA said.

The 32-team men’s World Cup allocates 13 qualifying places to Europe for the 2022 edition, five guaranteed places to Africa, four each to South America and Asia, and three to the North American region known as CONCACAF. Two more places are decided by intercontinental playoffs that exclude Europe or Africa.

The 2019 Women’s World Cup allocated eight qualifying slots to Europe, not including host France. Five went to Asian teams, three each to Africa and CONCACAF, two to South America and one to Oceania. One was decided by a North America-vs.-South America playoff.

FIFA is also likely to change the commercial structure of the Women’s World Cup, giving it dedicated sponsors. Currently, FIFA’s sponsors have deals across the men’s and women’s tournaments.

FIFA noted Friday that “the current economic model has the possibility to shift from being subsidized by men’s football to becoming a sustainable revenue stream.”