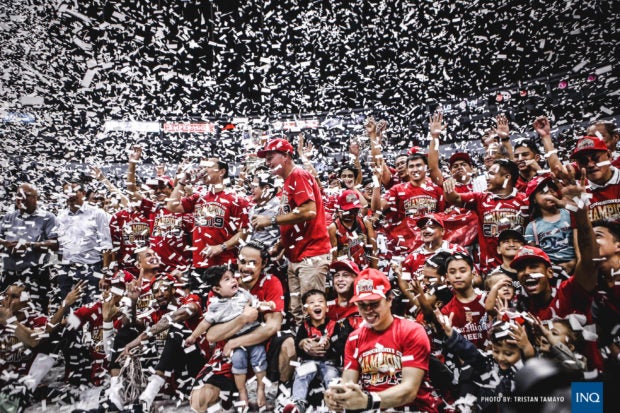 Bring out the confetti and the chilled beer—and the Grand Slam talk. The league’s winningest franchise is on top of the world again.

San Miguel Beer started strong and finished even stronger to trounce TNT, 102-90, in Game 6 of the Finals series and claim the PBA Commissioner’s Cup title at Smart Araneta Coliseum on Friday.

“Our journey to the Finals [was like] a roller-coaster [ride],” said San Miguel coach Leo Austria, referring to the Beermen’s sputtering start to the conference. But that even made things sweeter for San Miguel, which won its 27th franchise crown with a piece of history attached to it: The Beermen became the lowest seeds to win a PBA crown.

“The players really worked hard because they knew what was at stake in this conference,” Austria added.

Taking the fight straight to the KaTropa right at the opening bell, the Beermen assembled several double-digit spreads early before flooring the gas pedal in the third period, where a Chris Ross triple stretched a 10-point halftime lead to 63-44, 5:47 remaining.

Jayson Castro tried to keep TNT in the fight and set the KaTropa up for a late haymaker, hitting the big shots that trimmed the deficit to 74-65, 11:37 left in the game.

Christian Standhardinger bunched most of his 18 points during that Castro-led uprising, giving the Beermen enough breathing room to recoup and assemble a 9-2 exchange that helped them weather that challenge and forge an 83-67 lead, 8:50 remaining.

“I just wanted to give my best in the game,” Standhardinger said.

And with the KaTropa’s weapon of choice—the three-point shot—conking out at the most inopportune moment, TNT couldn’t muster any fight the rest of the way.

TNT—the conference’s top seed—made just seven of 28 shots from beyond the arc, missing a lot of wide open treys and allowing San Miguel to complete a remarkable climb from the No. 7 seed to the throne.

Chris McCullough, who vowed to turn a 2-win, 7-loss club into a champion when he was signed to rescue a flat-lining campaign, delivered 35 points, 13 rebounds and four blocks in the closeout match that pushed San Miguel to the doorstep of a second franchise Triple Crown.

The Beermen completed their first Grand Slam in 1989 and were also on the cusp of a season sweep when they assembled this talent-rich squad and won the 2017 Philippine Cup and Commissioner’s Cup titles.

But San Miguel Beer faltered in the Governors’ Cup, shelving its dreams of a Grand Slam.

“This is our second chance [for a Triple Crown],” Austria said.

Terrence Romeo, who provided the Beermen with valuable scoring spark off the bench in crucial victories in Games 2 and 4, was named Finals MVP after averaging 14.8 points and 4.3 assists in the series. He finished with 10 in Game 6, one of five Beermen in double figures.

Terrence Jones, the NBA veteran whose prolific all-around game was supposed to help end TNT’s title drought, finished with 41 points for the KaTropa, scoring heavily when the game was beyond reach. Castro added 16 while RR Pogoy made 14.