Return of the Mac-killer: Nate Diaz ends hiatus at UFC 241 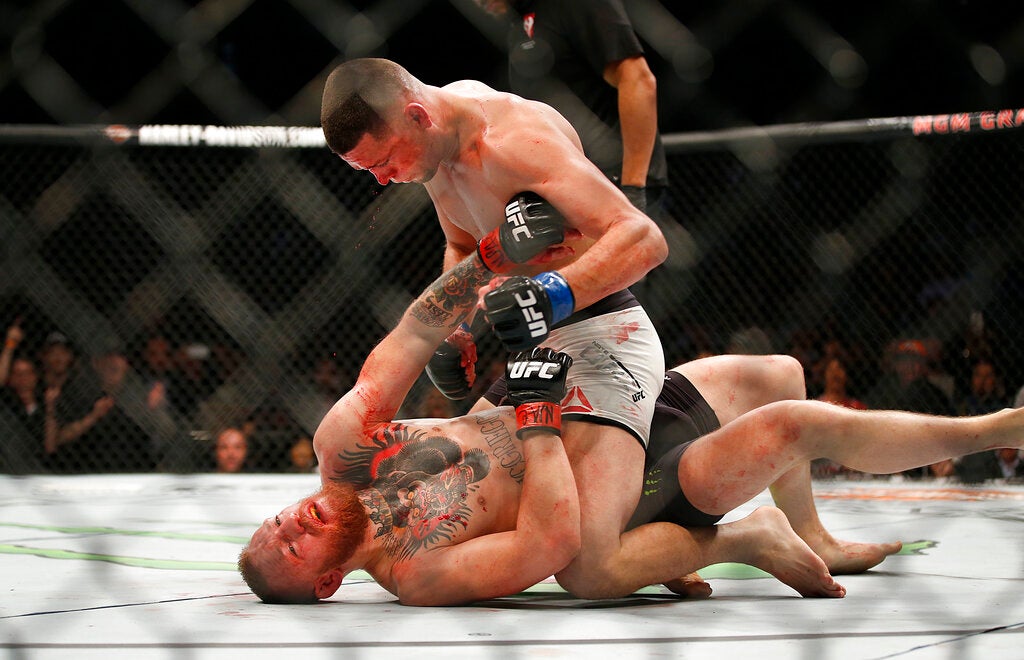 ANAHEIM, California — The mostly empty arena rumbled with outsized excitement when Nate Diaz stepped onto the stage. The fans erupted into cheers while Diaz lit a joint and took a big drag before doing a little shadowboxing for the cameras.

Even before he said a word at his open workout four days before UFC 241, Diaz showed he can captivate an audience like no active fighter in the mixed martial arts world. Fighters can train for almost every skill in the game except charisma, and the Diaz brothers are laden with it.

The younger Diaz (19-11) returns from a three-year hiatus on Saturday night, taking on Anthony Pettis in his first bout since his two showdowns with Conor McGregor in 2016. A heavyweight title rematch between Daniel Cormier and Stipe Miocic is the main event, but many fans at Honda Center and around the world will be watching mostly to see what Diaz does next.

“I’m here as a businessman and a natural born killer,” Diaz said. “I’m here to get the job done, and he’s the guy to do it on, so there’s no problem. It’s all good with me. I’m just here to kill and stay alive for the weekend.”

Diaz and his older brother, Nick, receive a level of adulation in the MMA world that exceeds even their considerable accomplishments. It’s difficult to explain the Diaz appeal to observers who don’t have a full historical perspective on the pugnacious, thoughtful brothers’ omnipresence in their sport’s attitudes and images during the past 15 years, even when they weren’t competing very often.

Their swashbuckling attitude, angry disregard for authority, profane words of wisdom and athletic fighting styles all appeal tremendously to many people who support a young sport that’s still seen as repellent counterculture by a big segment of mostly aging sports fans.

Put it this way: A 22-year-old Nate Diaz once completed a submission finish with his legs while simultaneously thrusting two middle fingers in the air. You might love that or hate it, but you have an opinion.

“That’s the way I’ve been from Day One,” Diaz said. “It’s going to stay this way, too, until I’m 100 years old. I’m the Don of all this. If anybody is going to step in this room and say they’re the (butt)-whipper, I beg to differ.”

Even Anthony Bourdain, the late traveler and gourmand, famously filmed a segment with Nick and Nate for his CNN show on Los Angeles, not because the Northern California natives knew much about LA and its cuisines — other than the best weed, probably — but simply because Bourdain, a jiu-jitsu practitioner and MMA fan, was fascinated by the brothers’ outlaw ethos.

Some of the brothers’ behavior seems performative, but some of it isn’t: Both Nick and Nate have essentially walked away from the UFC for long stretches of their prime, turning down countless millions in prize money because they refused to compromise what they considered to be their principles.

Diaz split two tremendously entertaining matchups with McGregor and became one of the UFC’s biggest stars in 2016, but he is 34 years old now, and Saturday’s fight will be only his fifth since November 2013.

Diaz said he felt mistreated by the UFC, although he struggles to explain how its persistent attempts to book one of its most popular fighters constitute disrespect. Diaz turned down matchups worth millions, including a probable shot at Georges St. Pierre, and he lost a chance to return last year when future champ Dustin Poirier was injured before their bout.

Diaz also said he doesn’t fight for money. He and his brother, Nick, who hasn’t fought in nearly five years, are busy with Nick’s thriving gym in their native Stockton, California. Nate said they’ve also got a successful CBD business, to absolutely nobody’s surprise.

“They’ve been trying to degrade me the whole time I’ve been out,” Diaz said. “They’re trying to put me low on the card against not very big names. They also tried to give me huge names, but those fell through. It don’t matter. I believe I’m the main event in any event they’ve got. They’ll do the best they can to keep me from that.”

Diaz’s complaints are more likely a distilled version of that everyone-is-against-me mentality that drives so many athletes. But he was tempted back by a matchup with Pettis, who nurses a grudge against Diaz that apparently isn’t mutual.

Diaz dismissively refers to Pettis as “this Wheaties box” in reference to Pettis’ former endorsement deal with the cereal, but has mostly ignored Pettis’ pointed criticisms.

Diaz won’t say whether he plans to fight again, or whether he would like his first UFC title shot since 2012. He will stick to his own timetable and goals while nursing the same attitude that kept him on top of the UFC star pyramid even during three years away.

“No one on the roster for the last three years even read the blueprints,” Diaz said. “I’m right there. Why don’t you go take it? And nobody did, and tomorrow, if some of these young guys say they’re going to step up and take my position, I’m not with that.”