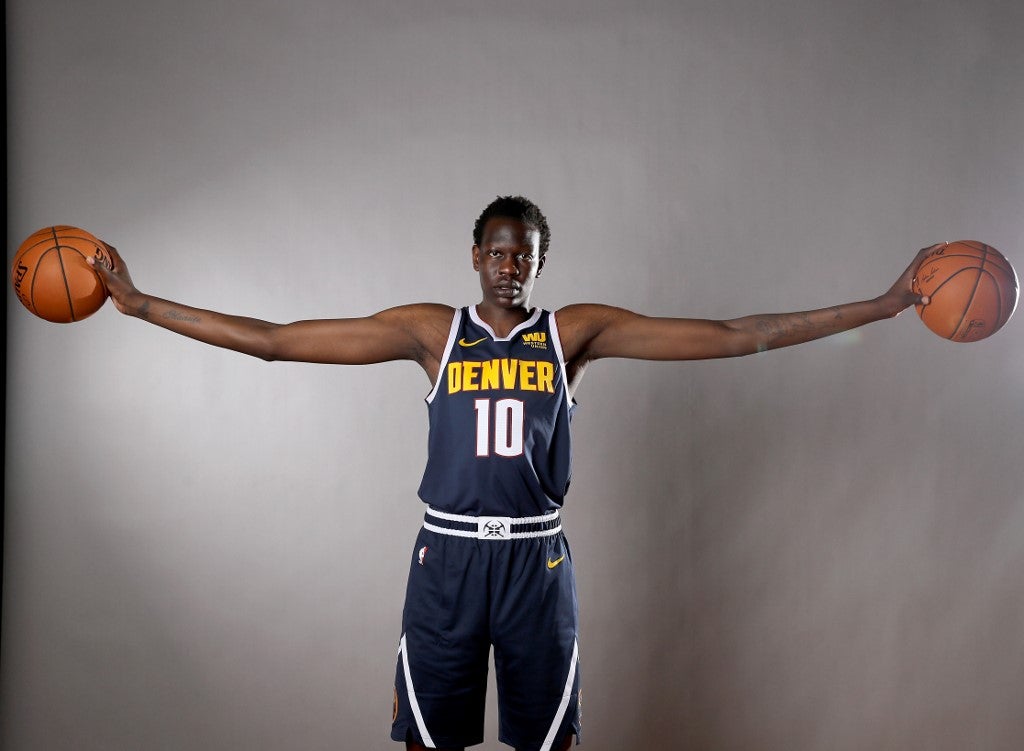 Bol Bol of the Denver Nuggets poses for a portrait during the 2019 NBA Rookie Photo Shoot on August 11, 2019 at the Ferguson Recreation Center in Madison, New Jersey. Elsa/Getty Images/AFP

Teen center Bol Bol, the Sudanese-American son of the late NBA star Manute Bol, is confident and excited to begin his own NBA journey with the Denver Nuggets.

The 7-foot-2 (2.18m) 19-year-old has an amazing 7-foot-8 (2.37m) extended fingertip reach, impressive outside shooting and dribbling moves to match his formidable shotblocking skills and is back to full strength after a left foot fracture cut short his US college career.

Bol averaged 21.0 points, 9.6 rebounds and 2.7 blocked shots a game in nine appearances for the University of Oregon, connecting on 56.1 percent of his shots, including 52 percent from 3-point range.

“I can just do a lot of things that people my size can’t do,” Bol said after the draft. “I can dribble pretty well, can shoot from anywhere pretty well and my passing is pretty good.”

He was touted as a top-five talent for the NBA Draft but went 44th over concerns about his foot.

“Everything is perfect. Everything has fully healed,” Bol said. “I’ve been working out in the morning and coming back at night.”

Retired NBA legend Shaquille O’Neal told complex.com that if he had to pick one player to build an NBA team around, the Hall of Fame center would select Bol over top draft pick Zion Williamson.

“I’ve seen the potential of what this kid can do,” O’Neal said of Bol. “He has got it all. He’s (tall), can shoot, dribble, pass. Nobody knows it because he was hurt all the time.”

Bol also will have the chance to learn at Denver from Serbian center Nikola Jokic, an NBA All-Star and All-First Team selection. And the Nuggets are expected to contend for supremacy in a wide-open Western Conference.

“I’m coming into a really great team,” Bol said. “I know my role as a rookie is to be prepared as much as I possibly can and be ready for anything.”

The Nuggets see Bol as a long-term impact player whose versatility will cause trouble for opponents.

“With his length and ability to protect the rim and stretch the floor, it’s a pretty rare combination,” Nuggets president of basketball operations Tim Connelly said. “We think his skillset, his pedigree, who he is as a guy, will fit in well in the locker room.”

Bol moved a step closer to realizing his NBA dream this week by taking part in the league’s rookie orientation program, learning about such off-court skills as financial planning, a post-NBA career, education and coping with the issues of an NBA lifestyle.

“Quite a lot of stuff I didn’t know, money management, being safe off the court — they taught me a lot of things I would never have known,” Bol said.

The 33-year-old program, part of a year-long preparation regimen for NBA life, included a record 84 players and advice from current and former league players on the challenges to be faced off the court.

“This is helping broaden their understanding to be a citizen of the world,” said Greg Taylor, NBA senior vice president of player development.

Sudan-born Bol has a global following already, although he left his homeland with his family before he was two and moved to the United States, training as a child with his famous father.

Manute Bol, who died in 2010 from kidney failure, matched Romanian Gheorghe Muresan at 7-7 (2.31m) as the tallest player in NBA history. The elder Bol played in the league from 1985-1995, twice leading the NBA in season blocked shots during stints with Golden State, Washington, Miami and Philadelphia.