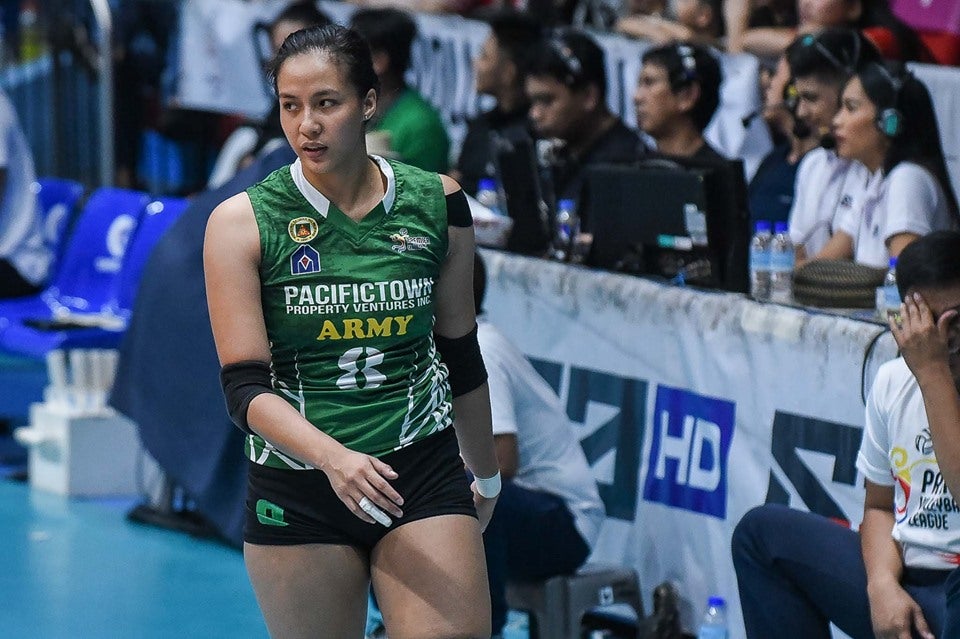 Jovelyn Gonzaga wasn’t aware of the scores when the first set extended to a record length. And when her PacificTown-Army went down two sets, she wasn’t aware, too, on what fuel she was running on.

“I can’t think of anything anymore, it was all attitude on my part,” said the 27-year-old battle-scarred hitter. “Coach told me to stay in the game and hit at the  highest possible percentage.”

The Army standout obeyed both orders and displayed unwavering resilience under heavy fire, standing her ground and holding off Choco Mucho forces threatening to finish PacificTown-Army in straight sets.

The lefty gunner from Camiguin finished with 24 points as the Lady Troopers unleashed their vaunted veteran moves to post an epic 39-41, 19-25, 25-19, 25-20, 15-12 victory Wednesday in the Premier Volleyball League Open Conference at Filoil Flying V Centre.

It was the longest game in recent PVL history, officially lasting two hours and 46 minutes—and one that tested the Lady Troopers’ resolve when facing heavy enemy fire.

The Water Defenders broke a 12-game losing streak spanning the past conference to up their record to 1-2. The Jet Spikers fell to 0-3.

“It was an all-out battle and in the end our opponents ran out of ammunition,” said PacificTown-Army coach Kungfu Reyes in Filipino. “I got two hitters here who needed to recharge, but in the endgame they delivered.”

He was referring to Gonzaga and Honey Royse Tubino—who like Reyes are actually enlisted Philippine Army personnel.

Tubino, who added 21 points, had to be pulled out in the second set after her legs went numb as the Lady Troopers tried to keep up with the young Flying Titans’ blistering pace.

“We evaluated in the third set and decided to slow down the tempo,” said Reyes. “We are good at it, slow play and quick points.”

He told the players to “just hit the ball when it’s over you. Don’t jump too much. No unnecessary effort so we can recover again.”

Gonzaga didn’t need much recovery period. Not even after the match.

“I can’t feel any fatigue,” said Gonzaga. “Maybe because I have been winning. I am in high morale.”

Remember that this is the same hitter who, less than 24 hours ago, scored 15 points to help Cignal HD beat defending champion Petron and stay in the hunt for a finals slot in the Philippine Superliga.

“Everything that I do now is just my attempt to repay my coaches for their trust in me,” said Gonzaga of her breakthrough performance since coming back from ACL injury that sidelined her for almost two years.

Reyes said it was good test for them because the one thing they dread is playing five sets.

“But it’s still early in the conference; I don’t know why we are playing like it’s the finals,” he added.

Maybe in the PVL. For Gonzaga, however, she has already raised her game to playoff levels. Because in less than 24 hours, she will again anchor Cignal’s bid to complete an upset in the other league, dethrone Petron and clinch a championship berth.