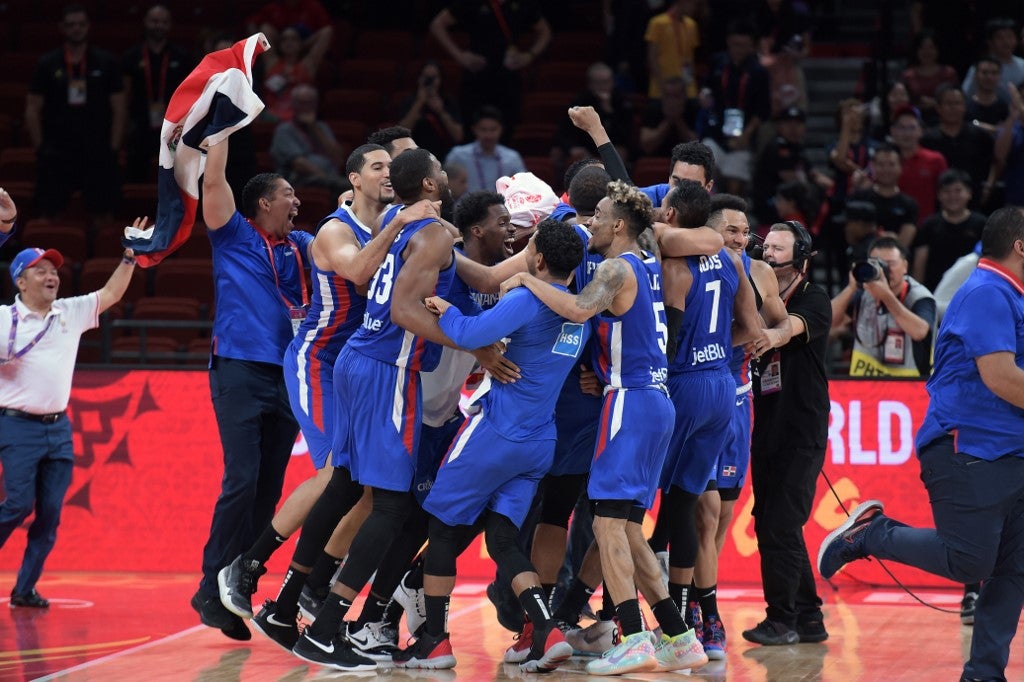 Dominican Republic’s players celebrate after their team’s win against Germany at the the Basketball World Cup Group G game in Shenzhen on September 3, 2019. (Photo by Nicolas ASFOURI / AFP)

They are the joint-shortest team at the Basketball World Cup in China but the Dominican Republic is proving that size isn’t everything after winning both of their opening matches.

The Caribbean nation surged into the second round of the tournament on Tuesday with a gutsy 70-68 victory over the more fancied Germany, to go with an opening 80-76 win over Jordan.

“Maybe for a lot of people we are the tournament surprise,” said their husky-voiced Argentine coach Nestor “Che” Garcia after seeing off the Germans.

“But we believe in ourselves and now we enjoy this moment.

“But this is only one game, this team can do more things in the World Cup.”

Their place in the next round assured, the 54-year-old Garcia and his unheralded men are now sizing up mighty France on Thursday with Group G supremacy at stake.

The Dominicans’ tallest player is the 6ft 11in (210cm) center Eloy Vargas and the average height of their roster is 6ft 4in, according to governing body FIBA statistics.

That makes them, along with the Philippines — twice heavy losers in China — the shortest team of the 32 at the tournament. The tallest is Serbia at an average 6ft 9in.

The Dominicans will again be staring upwards at their opponents when they face France (average 6ft 8in), but forward Ronald Roberts says what they lose in height they make up for in other ways.

“We played with a lot of energy. They couldn’t match the energy the whole game and that was the biggest thing,” said Roberts, who plays club basketball in France, after the Germany victory in Shenzhen.

There are a record 54 NBA players at the World Cup — but none represent the Dominican Republic because Garcia is without Karl-Anthony Towns, of the Minnesota Timberwolves, and the Philadelphia 76ers’ Al Horford.

That makes the job done by Garcia — a veteran of nearly 30 years’ coaching in South America and latterly Spain — all the more commendable.

He saw the funny side following the win over Germany when, in the absence of a translator in Shenzhen, he acted as a stand-in to interpret from Spanish into English the comments of his player Victor Liz.

“I did my job, I don’t want to be a translator, I’ve already finished my job,” joked Garcia.

But taking a more serious turn, he gave an insight into the way that he handles his men when they are facing adversity — and inevitably taller opponents.

“Now the world has changed,” he said, sounding more philosopher than basketball coach.

“Before, in the past, if you see, you believe. That (was) my father’s school (thinking).