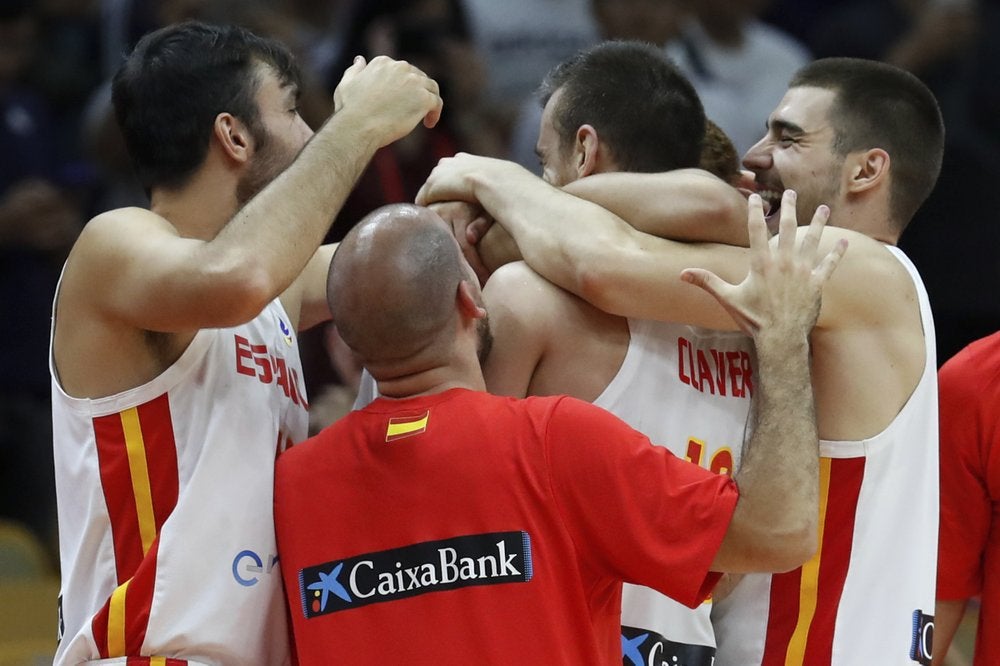 Nigeria and Iran are going to the Olympics. China’s World Cup run came to a disappointing end. And Serbia is unbeaten no more, making a third consecutive meeting with the U.S. in a gold-medal game now unlikely.

Nigeria clinched the Olympic berth that goes to the top African finisher in the World Cup by beating China 86-73 on Sunday. It’s the third straight Olympic trip for Nigeria.

“Right now, we kind of feel like it’s the golden age of Nigerian basketball,” said Ike Diogu — one of five NBA players on his country’s World Cup roster.

Nigeria’s victory over China also meant the hosts would not earn the berth going to the top Asian finisher. Instead, that goes to Iran after it beat the Philippines 95-75. China will have to go through a qualifying tournament next summer.

“Unbelievable,” Iran forward Michael Rostampour said. “The highs and lows of this World Cup are just ridiculous. … This is a great day to be an Iranian.”

Serbia lost to Spain 81-69 in a matchup of teams that came into Sunday night with 4-0 records. Serbia will now face unbeaten Argentina in the quarterfinals at Dongguan, China, on Tuesday — with the winner there likely being in the same bracket with the U.S. in the semifinals.

Spain will head to Shanghai for a quarterfinal game with Poland, which lost to Argentina earlier Sunday 91-65.

Spain was down by nine early before taking control in a game where Serbian star Nikola Jokic was ejected after picking up two technical fouls in the third quarter.

Ricky Rubio scored 19, Victor Claver had 14 and Marc Gasol added 11 for Spain (5-0). Bogdan Bogdanovic scored 26 points and grabbed 10 rebounds for Serbia (4-1), which was held to 34.3 points below its average from the first four games of the tournament.

The Serbs lost gold-medal games to the U.S. at the 2014 World Cup and 2016 Olympics. If they see the U.S. again in this tournament, it’ll likely be in Friday’s semifinals — provided both teams advance.

Marco Belinelli scored 27 points and Danilo Gallinari scored 22 as Italy (3-2) rallied from a 26-point third-quarter deficit, putting together a 42-9 run and then holding on in overtime. Renaldo Balkman scored 14 points and Angel Rodriguez scored 13 for Puerto Rico (2-3).

The last quarterfinal spots for the World Cup could come down to a tiebreaker.

That’s not good news for Greece.

Winning a second-round finale against the Czech Republic won’t be enough for the team led by NBA MVP Giannis Antetokounmpo — it’ll have to win by 12 or more points to have any chance of reaching the quarterfinals. Point differentials could come into play if there are ties in the standings, and that likelihood complicates matters not just for Greece but for Brazil as well.

“In the end, every point matters,” Czech Republic guard Tomas Satoransky of the Chicago Bulls said.

The U.S. is in total control of the race for one quarterfinal spot — the only scenario where the Americans would not advance is if the Czech Republic beats Greece and if Brazil then tops the U.S. by at least 22 points.

So it’s reasonable to think the Americans will be headed to the quarterfinals.

The U.S. has had NBA players making up the roster for 201 international games since 1992. The Americans are 192-9 in those contests, and none of the nine losses was of the 22-point-or-worse variety.

“I said after our game that it doesn’t matter if we lost by one or by 22,” NBA veteran and longtime Brazil standout Anderson Varejao said after his team lost to the Czechs by 22 on Saturday. “But no — it does matter because of the tiebreaker. During the game, you’re not always thinking about that even though you need to keep the score as close as you can.”

Satoransky said the point margin was very much on the minds of the Czechs as they pulled away from Brazil on Saturday.

“Thank God we kept scoring at the end,” Satoransky said. “It’s always a factor. We knew it and we told players to play until the end defensively, try to run and score offensively. It all matters.”

U.S. — Advances with a win over Brazil, or a loss to Brazil by no more than 21 points, or a Greece win over the Czech Republic.

Czech Republic — A win over Greece gets it to the quarterfinals. It could still qualify with a loss, provided both the loss is by no more than 11 points and the U.S. defeats Brazil.

Brazil — A win over the U.S. by at least 22 points assures it of a quarterfinal spot. If it beats the U.S. by fewer than 22, it would still advance if Greece beats the Czechs. Brazil cannot advance with a loss.

Greece — A win over the Czechs by at least 12 points, combined with a U.S. win over Brazil, is the only scenario where the Greeks advance.