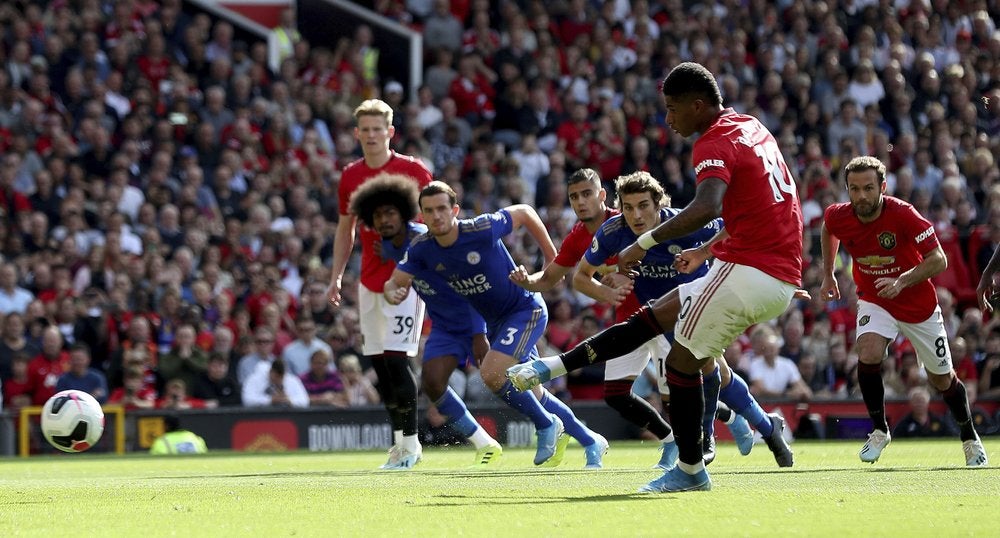 MANCHESTER, England — Manchester United earned its first win in over a month in beating Leicester 1-0 thanks to an early Marcus Rashford penalty on Saturday.

United lost one and drew two of its last three English Premier League games since beating Chelsea 4-0 on the opening day, but seized the lead early against Leicester.

Rashford was brought down by Caglar Soyuncu, who’s taken over in Leicester’s defense after United signed Harry Maguire, and stepped up to score with a powerful strike from the spot in the eighth minute.

United had missed two penalties since scoring one in the win over Chelsea, and Paul Pogba had been targeted with racial abuse on Twitter following a penalty miss last month.

After the fast start, however, United’s energy dissipated. Manager Ole Gunnar Solskjaer admitted the team failed to win games even when “performances have been miles better than this.”

United looked robust in defense, with Maguire containing his former Leicester teammate Jamie Vardy, but lacked a cutting edge to take advantage of Leicester’s disarray after the first goal.

Leicester, which had been unbeaten in its first four league games, nearly leveled in the 30th when goalkeeper David de Gea was forced to leap to keep out a long-range shot from Ben Chilwell. That was de Gea’s second big save of the game after stopping James Maddison’s shot in the opening minutes.

The game largely fizzled out in the second half, with United happy to defend a one-goal lead — with hard-working Scott McTominay holding the midfield together — and Leicester unable to create clear chances.

“Of course, we want to play better than this. We want to have the ball and dominate,” Solskjaer said. “But some games, sometimes you play against teams that give you problems and I thought we rode the game out well.”

Rashford hit the bar with a free kick later on, while Wilfred Ndidi had Leicester’s best chance for a late equalizer, blasting wide of the post in stoppage time.