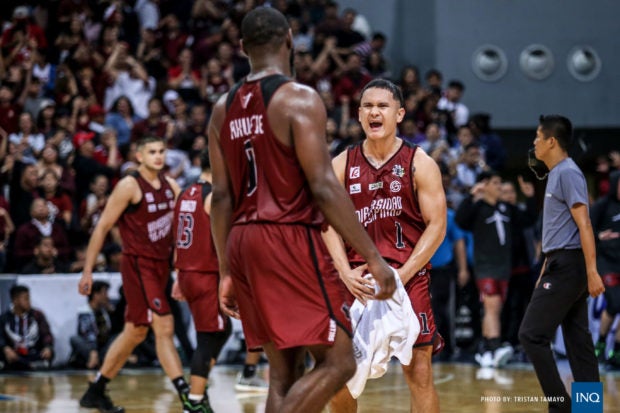 Rhenz Abando nailed two clutch triples in overtime. Bright Akhuetie, with all eyes on him, knocked down two pressure-packed free throws—also in the extra period. Amid the heroics of both players that sent their schools to dramatic victories, University of the Philippines star rookie Kobe Paras made the most of his UAAP debut.

“This is my third chance at college basketball and, actually, in life,” said the 6-foot-6 Paras, who kept the Maroons afloat before Akhuetie made the freebies that sealed an 83-82 victory over Adamson on Sunday at Mall of Asia Arena.

After his two stints in the US NCAA failed to pan, Paras made his highly anticipated debut for the Fighting Maroons in Season 82’s men’s basketball tournament and immediately showed why he’s worth the wait.

The son of PBA legend Benjie Paras scattered 20 points in 41 minutes as the Fighting Maroons rallied from huge deficits to steal the victory from the Falcons.

It was also a comeback triumph for University of Santo Tomas, which was one defensive stop from defeat before Soulemane Chabi Yo hit a game-tying basket with 2.8 seconds left in regulation and Abando lit the wick of a jackrabbit start in overtime as the Tigers deflated National U, 87-74.

The game was closer than the final score indicated. The Bulldogs looked to have the game in the bag but celebrated too early Enzo Joson’s layup that gave NU a two-point spread with 6.5 seconds remaining.

That allowed UST to push the ball hard in a counterattack where Mark Nonoy found Chabi Yo for the shot that tied the game at 70.

Sherwin Concepcion hit a three and Abando threw in two more in consecutive fashion as the Tigers pulled away early in overtime for their third win in four matches.

Abando had 21 points on 5-of-10 shooting with coach Aldin Ayo acknowledging his player’s in-game adjustments. Chabi Yo delivered his fourth double-double of the season with 23 points and 20 rebounds.

“He (Abando) allowed the game to come to him. We know how talented he is but when he struggles, he could get discouraged,” said Ayo of his young star. “Actually we didn’t play well for three and a half quarters. But the players continued to compete and stayed composed.”

Paras admitted battling mental health issues over the past year, but has found refuge with a powerhouse UP team that is still trying to build its chemistry and cohesion this season.

“I’m happy playing for coach Bo (Perasol) and the rest of the UP community,” said Paras, who missed the first two games due to an ankle injury. “This win helps us build our chemistry. A lot of people are saying we have talent, but it’s not easy to put things together. I’m just glad we have games like this because it brings us together.”

Perasol was just as delighted to have a talent like Paras.

“We have a great catalyst in Kobe,” said Perasol of Paras, who also issued the assist to Javi Gomez de Liaño to tie the game at 73 with a triple with 17 seconds left in regulation. “He gives inspiration to his teammates.”

The Maroons improved to 2-1 while sending the Falcons to their second loss in four games.

NU, meanwhile, dropped to 0-3 after yet another heartbreaking defeat following one-point losses to Adamson and La Salle in their first two games of the season. NU remains the only winless team in the tournament.

In regulation this season, the Bulldogs have been outscored by a combined two points in three games, underscoring how close the school’s record is to being 3-0.

Also leaving the arena with a heavy heart was Adamson rookie AP Manlapaz, who had six of his 17 points in overtime. That, plus Jerom Lastimosa’s steal and transition basket pushed UP behind, 75-82, 2:22 remaining in overtime.

But the Maroons’ defense forced the Falcons into a maze of errors, opening the door for UP to complete the comeback.